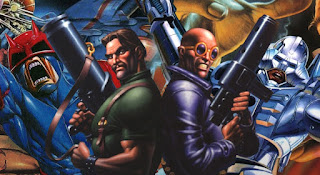 As I've cast a critical nostalgic eye over games like 'Cannon Fodder', 'RoboCod', 'SensibleSoccer', 'The Chaos Engine', 'Lemmings', 'Pinball Fantasies', 'James Pond', 'Zool' and 'SpeedBall 2' I've frequently mentioned Amiga computers. While I've always identified myself as a console Retro Gamer, that's really only half the truth. Growing up I played many a game on a home computer as we owned an Amiga 500. I'm always surprised that these machines are often overlooked when people talk about favourite gaming memories. While they may not have been that popular in America, in the UK at least, everyone seemed to own one. (Or more specifically everyone who didn't own an Atari ST had one!) It was a range of home computers that were versatile, well severed by creative minds and blighted by piracy. For while all my friends and I had huge Amiga game collections, a fraction of these were bought legitimately. While this was clearly awful for game developers and the longevity of the computer, for me it meant a chance to play a huge array of games. It's hard to imagine a genre of video games that didn't have some sort of representation on the Amiga. While it's true that a lot of these were pale imitations of the most famous console releases, the Amiga also served as a proving ground. A great many games that later found success internationally on consoles started life as an experimental project on the Amiga. With a thriving PD scene and home programmers competing to push the boundaries of what the A500 could do there's clearly a lot to talk about. And this is exactly what I have done.


I've always listened to gaming podcasts on commutes to work. I love hearing passionate, like minded people witter away about the games of yesteryear. Frequently the presenters are of a similar age to me, so their happy memories are also mine. I jump at the chance to appear on Podcasts especially when it's a topic I love dearly. This is why I was so delighted to join the Maximum Power Up podcast to talk about RPGs a few months back. Evidently I did a good job as they have since invited me back to talk again about the Amiga. For close to two hours I was gifted the chance to chat to my friend Paul, covering happy memories of the games we user to play on this fantastic range of computers. It's naturally a huge topic but (owing to the fact I speak Very quickly) we got through a lot. From magazines and cover discs to 'D Paint' and 'Amos' programming, there wasn't much we didn't at least mention.


Early feedback has been very encouraging which is obviously flattering. English listeners in particular are thrilled that the machine that allowed for much of their childhood gaming has finally been discussed on the show.


Hopefully it'll be the start of many more appearances on The Maximum Power Up podcast in the future.