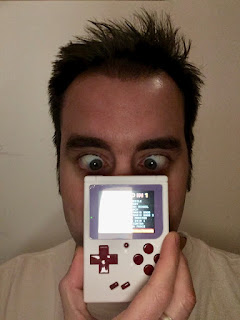 There are few things worse than a missed opportunity.

I must admit I didn’t expect much when the developer offered me a BittBoy to review for RetroCollect.com. You see a lot of these sorts of consoles; often cheaply made in the Far East, obvious when you look in the poor build quality and terrible English on the box. Admittedly the BittBoy does come in a box with questionable English but the console within this box is probably better than you expect - only with one rather critical draw back.

According to their website the BittBoy allows you to “play your favorite old games in a brand new way, on an easy to carry handheld with a beautiful display.”

Modelled after the GameBoy this miniature console is a Nintendo NES emulator, exclusively playing the ROM files encoded onto the console. And that’s the problem, the 300 games included are a hit and miss affair and many of your promised “favourite old games” are simply absent. While there are a handful of big name titles including ‘Super Mario Bros’ and ‘Super Mario Bros 3’ there are just as many games missing that you’d think should be on there. Far out numbering the good is the bad (terrible home-brew games that are filled with glitches) and the ugly (awful ROM hacks that actually sully the original game and the game from which the replacement sprites were stolen). Two player ROMs are present despite the console offering no way to play with two people and many of the games are filled with Japanese text.

In many ways making this worse is the fact that the BittBoy really offers so much squandered potential. The console itself is remarkably good. The screen in particular is astonishing with rich colour depth, strong contrast, and a wide viewing angle. It’s not 360 degrees as the box claims (since you can see through the back of the console) but I couldn’t find an angle of play where the screen wasn’t crystal clear. The buttons are pleasantly responsive although the turbo buttons serve little point. But coupled with these incredible features are equally baffling ones, where the main use of a hand held just hasn't been considered. There’s no headphone jack which surely must be a huge faux pas on a portable machine. There’s no save state options so short bursts of play aren’t possible (unless you love replaying the first levels of games over and over). Similarly there are no battery backup, low battery or sleep modes.

But the biggest thing wrong with the BittBoy is the tease that is the Micro SD slot, although hole would be a more apt description.On the top of the unit is a slot where clearly a memory card was intended to go, but due to cost or time this port has not been included in the current retail model. There’s literally a hole that leads to nowhere. Obviously were this included it would be very easy to recommend the BittBoy. You could erase the awful included ROM files, put on your own legally acquired games and play them on a conveniently small compact system. I get excited by the thought of it even becoming a portable GBA emulator, especially as it has the required four face buttons and the DPad already on the console.


Perhaps I’m not the target audience for the BittBoy as my seven year old daughter seems to love it. She doesn’t care that ‘The Legend of Zelda’, ‘MegaMan’ and ‘Metroid’ are missing. She’s happy to chop and change between the games and the handy reset button makes this easy for her. The two hour battery life reflects her attention span and the console seems resilient enough to stand up to a few knocks and bumps. However, at $40 the BittBoy is perhaps too expensive to be a seven year old’s toy.
While it may be frustrating that the console isn’t offering all it could, it is something that is worth keeping an eye on. If they can simply rework the software and make the content customisable with a MicroSD port, it really would be a cheap tiny hand held worthy of your attention.
If you wish to pick one up head on over to http://www.bittboy.com. But before you do I really suggest you read my much more comprehensive and detailed review here.
----

I was provided the BittBoy for review at no cost.

However, the developers have not seen this review prior to it going live nor have they had any say on its content.

Email ThisBlogThis!Share to TwitterShare to FacebookShare to Pinterest
Labels: hardware