As the Switch grows in popularity more and more indie developers are porting their successful mobile and PC games. But despite enjoying huge unexpected success on Steam, do Console players want to play a game that’s part 3D scavenger hunt and part text adventure?

Developed by Robot Gentleman
Released in 2018 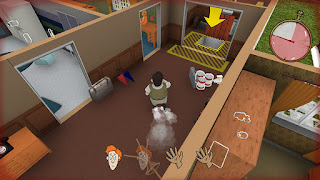 For a game called ‘60 Seconds!’ I seem to have sunk an astonishing number of hours into Robot Gentleman’s quirky survival comedy. It’s a game of two distinct halves and the name actually alludes to the part you’ll play first. The Reds are about to drop a nuclear bomb on a small American town. You have just one minute to collect as much as you can before diving into your personal fallout shelter. Playing as Ted, the game is viewed from above as the slightly portly Dad rushes around his small house clumsily knocking over as much as he grabs. However as he is limited by how much he can carry, what should Ted prioritise? Should he make sure his wife and two children are safely secure in the shelter or selfishly ensure his own survival by gathering water and food? Is a rifle more beneficial than an axe, is there a need for a radio in a shelter or would a gas mask be of greater use? In each play through the house layout and the placing of the items is randomised, which certainly adds a sense of panic to the item hunt. A player may want to take medical supplies with them but unless you can find them in the strict minute limit you’ll have to leave them behind. Thankfully you are granted a brief amount of time to scout out the items in your home prior to hearing the whaling sound of the warning alarm. How long this is depends on the difficulty setting, but its Seconds rather than minutes. 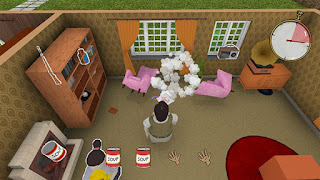 When a section of a game must be completed in a tight time limit it’s imperative that controls are responsive. Frustratingly this isn’t the case with ‘60 Seconds!’ Ted will only pick up something if it’s directly in front of him which frequently wastes valuable seconds. Equally annoying are moments when there are two items in front of him, as half the time he’ll waste an inventory space picking up the wrong one. It’s telling that for their follow up ‘60 Parsecs’, Gentleman Robot have made the foraging part of the sequel 2D. In 3D there simply isn’t the precision needed especially when the consequences of your item selections matter so much in the second half of the game.

Once the minute time limits have elapsed, Ted will find himself in his nuclear bunker surrounded by anything he managed to grab in the time limit. Depending on the choices made by the player this could include his wife and children but it’s entirely possible he is there on his own surrounded by bottles of water and cans of tomato soup. Now viewed from a static side-on perspective this section of the game plays similar to a visual novel as you try to survive as many days as possible. Every day you will have to decide how much rations and water you will give to each surviving family member. As a rule they’ll need to drink at least every four days and eat every ten but sticking to this minimum requirement will leave them weak and frail. Military help is on the way but when it’ll arrive varies each game and to be rescued you’ll have to ensure your resources last till then. Water and tin food allocation isn’t the only decisions to be made. As the days pass you’ll be presented with various situations that require difficult decisions to be made. These range from insignificant things like what you’ll give to a family member on their birthday, to more harrowing dilemmas like will you amputate your wife’s infected feet. 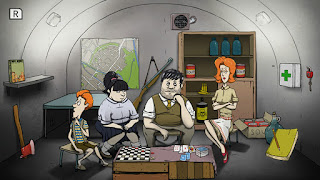 At various points you will also have the opportunity to send out a scavenging party, which will allow you to potentially get more rations or resources. However to do this you’ll have to a family member strong enough to go. Along with the chance of great reward, sending a party out of the bunker carries huge risk though. They could return with food and water but they’re equally likely to come back with radiation poisoning or a hideous injury. It feels like every decision made has an initial 50:50 chance of leading to a good result. You can increase the odds by sending them out with weapons or protective equipment but success still depends on random chance. While this means each game plays differently, it does mean victory is also out of the player’s hands. The survival section can last minutes or potentially extend over an hour depending on what options are presented to you. Each day lasts around a minute once you’ve read the family diary, allocated supplies and made the moral decisions. I’ve escaped after 20 days but also still been trapped after 70. 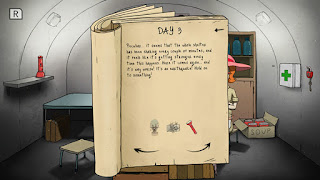 For most of the time during the survival section a player will simply be reading text. Thankfully the game has a wonderfully dark sense of humour that holds a player’s attention and makes some of the more horrific situations more palatable. Let’s not forget that ‘60 Seconds!’ depicts people starving to death while succumbing to madness or infection. “As with a lot of comedy involved in ‘60 Seconds!’, we couldn’t just make the [game] a realistic experience” says Gotojuch. “Every bit of it was tied into the dark comedy vibe that starkly contrasts with the seriousness of the nuclear apocalypse theme.” Without a comic edge the game would be repulsive to many.

According to Gotojuch ‘60 Seconds!’ consists of over 200 pages of content. Despite this, the longer a game lasts the more you’ll read repeated paragraphs. However, even if an identical situation presents itself there’s no guarantee you’ll see the same results from the same choices. There doesn’t seem to be a correct way to play the game which may frustrate many. “Basically it’s an ‘experience your own end of the world story’ game” claims art director Juliusz Zenkner. However, you don’t really write your survival story; you’re a participant in it. The game’s ending is ultimately and randomly decided for you. “There are two happy endings to the game and about a dozen unhappy endings, where the family perishes or loses their fallout shelter” says designer Dominik Gotojuch. “Although they are not scripted to happen on any particular day, their number is finite”. ‘60 Seconds!’ is rather like a ‘Choose Your Own Adventure’ book in this way; only without the ability to flick back through the pages should a choice lead to ruin. 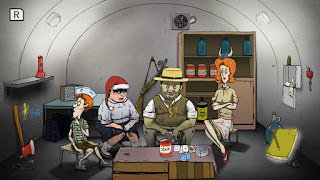 It is a game you’ll probably play mute though as the music repeats even more than the text does. At least it’s an intriguing soundtrack, almost a cross between ‘The Walking Dead’ TV theme and historic propaganda films. “One of the inspirations behind ‘60 Seconds!’ was the Cold War era fear of the nuclear apocalypse” says Gotojuch. “Indeed, the game is set in 1950s suburban USA. We drew a lot from that period, both story and art-wise, looking up comic books, books and films”. As distinctive as the visuals may be, there isn’t enough variation or animation. The family sit for the duration of the game, hardly moving and only changing in appearance to reflect the passage of time or a story event.

But despite the repetition of the gameplay, visuals, music and text I couldn’t help but become hooked on ‘60 Seconds!’. There’s an addictive quality to the game, a constant nagging feeling that you’ll do better if only you had more water or had sacrificed the daughter at the start. The game doesn’t stand up well to prolonged sessions but if you’re like me, you’ll find a quick attempt on ‘60 Seconds!’ becomes a ritual when you first sit down and play at the start of a journey. “I believe that ‘60 Seconds!’ [...] is good for travelling“says the game’s designer Radek Smektała. “If you are sitting on the train, for one play through, that’s perfect.” This is why the game is perfectly suited to the Switch. I found the touch screen made allocating supplies easier while the analogue stock on the joy-con controllers made the opening scavenge more enjoyable. “Nintendo’s Switch helps us fight the boredom and passing of time” agrees Zenkner.

The only sticking point is the price on the Switch eShop. On Steam the game is £7 but for Nintendo players this increases to £10. While I’ve played the game for a dozen hours and got my money’s worth ‘60 Seconds!’ certainly isn’t a game for everyone. I can imagine many would be bored by the amount of reading while others could feel frustrated that it’s not always possible to win through no fault of the player. For that much money it’s quite an expensive risk for a game that’s so divisive. 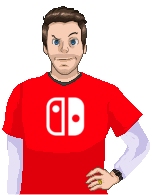 Fortunately ‘60 Seconds!’ does see price reductions and I picked it up for a little over £2. For that price it’s worth a punt, even if you only make two attempts to survive and turn the game off before the monotony kicks in. You’ll certainly laugh, and most probably learn a little bit about how far you’d go to survive in the event of a nuclear disaster. As Gotojuch puts it; “If you think about finding yourself in a scenario when you know that the world is going to end very soon, what is it that you do? What decisions do you make? Do you try to survive? How? With what and whom?” Sadly, if I’m ever in Ted’s shoes the outlook doesn’t look good for my daughters!