"Do you really like all these old games?" "Why play that old rubbish when you can be playing something that's just come out?" These are typically the questions I get asked when I tell people about this blog. Should you ever see me on my daily commute there's a good chance I'll be playing an emulated Snes game on my laptop for the purposes of this blog, but there is also the chance I'll be playing a game on my beloved Vita or 3DS. It really does depend on my mood, although in the main my mood steers me in a retro direction. Yes, I play modern games but I do prefer retro gaming.

The general consensus is that “Retro Gaming” is when a player chooses a game from at least one console generation ago. In 2014 "retro" means games from a time before the Playstation 2 but twenty years ago though "retro" meant a time before the NES.  It's an odd idea that seems to only exist in games. When you listen to music by The Beatles you're not “Retro Listening”, enjoying ‘Star Wars’ isn't “Retro Watching” and looking through a Dickens novel is not “Retro Reading”.  Maybe it's because the look and sound of video games changes so much as the medium ages. Putting special effects & picture clarity aside you can't always tell the difference between a film that's 30 years old and one that's just been released. 'Back to the Future' looks as good as it did in 1985 but the games based on it look primitive and basic when compared to the current generation's biggest releases. Of course there's always the argument that games are enjoyable regardless of how they look, it's the game play that's of paramount importance. Its true to a certain extent. The best version of 'Tetris' is and probably always will be the black and white GameBoy version. But visual aesthetic while not the driving force in a game's quality does attract us to a specific title though. If we find something attractive we are more likely to play it for longer; a mediocre game can become good if it looks and sounds nice. In terms of look there is a retro gaming sweet spot for me. Games older than the 8bit consoles are not visually exciting for me and without superb game play I will be unlikely to stick with them for long. Conversely early polygonal games that straddled the 2D/3D transition I also find pretty abhorrent, unless the limitations are embraced as they were in 'Starwing' and 'Stunt Race Fx'. Despite what some may claim 'Mario 64' and most Nintendo 64 games have not aged as well as the sprite based games on the Snes. This is because Super Nintendo games were being drawn by artist who had had years to perfect the pixel art style, however 3d graphics were in their infancy.


It'll come as no surprise that, for me, Retro games are at their best when they slot into a Super Nintendo. This was a time where the game play law of 2d games was firmly established, and these mechanics still exist in modern games today. It was also a time when the pixel art look and chip tune sound that I enjoy was being created by the best in the industry.

There's the mistaken belief that retro gamers have only recently stared going back to old games but the truth is it's existed for as long as there have been older games to long for. Indeed, it is a little ironic that a "retro" magazine like Super Play carried a feature on "retro games" twenty years ago. “Retro gaming” Tony Mott wrote “is everywhere. Fueled by the “graphics aren’t important – it’s all in the game play” dictum, any game publisher with a back catalogue of any history to plunder has done so with aplomb.” 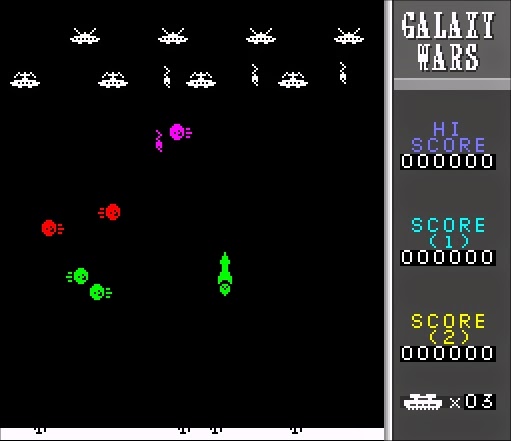 One game that is included in article is 'Galaxy Wars' a Super Famicom conversion of a 1979 Taito arcade game. This Super Famicom conversion was greeted by a Japanese only audience some sixteen years after the game was in the arcades and I can only imagine they were less than impressed with the primitive game. As Tony Mott says “ten minutes with this is enough to make even the hardest of hardcore nostalgia freak struggle to stave off disillusionment”. 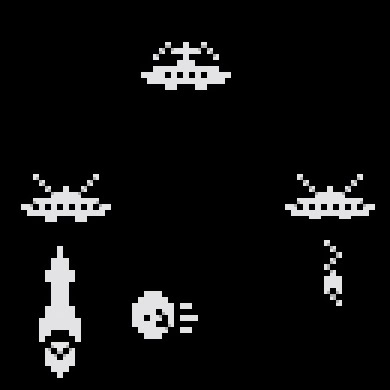 The gameplay in ‘Galaxy Wars’ is simple; guide a rocket into alien ships that are slowly descending down the screen.  If you miss, hit an asteroid or your rocket gets shot you will lose a launching pad. Lose all launching pads and the game is over.  ‘Galaxy Wars’ is therefore initially about timing your shot (since once fired a rocket can't be stopped) but ultimately about weaving between foes to destroy the enemies in the order of the danger they present.

It sounds a lot more fun than it is and people who claim that similar games like 'Space Invaders' are as fun as 'Pop N Twinbee' have very different tastes to me. Any initial fun ‘Galaxy Wars’ offers become monotonous on the second level when you realise you are tasked with doing exactly the same thing to exactly the same enemies who move in exactly the same way. 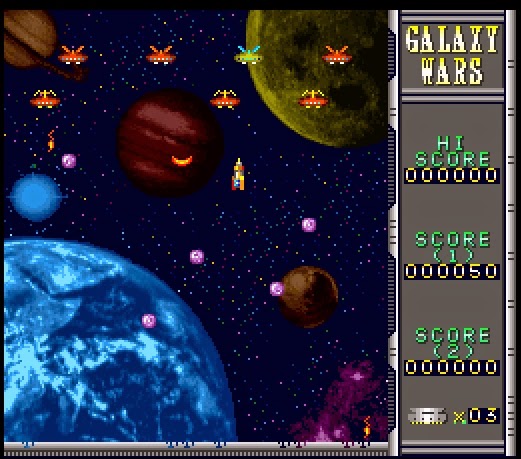 In its default mode the game is monochromatic, making this Super Famicom game look far older than it is. A "Neo" mode adds very simple 16 bit graphics, a static background and music. These would enhance the game were they any good but the enhanced aesthetic isn't a patch on other Snes games, with stereotypical design, limited animation and minuscule sprites. The background music (while far better than this game deserves) is an improvement on silence but far too short. Looping endlessly across as you play, It's as monotonous as the game play.

The graphics and sound "improvements" are just window dressing of course and only disguise the dull game play briefly. 'Galaxy Wars' is a poor game not because it looks bad in original and Neo mode, it's bad because what you have to do is dull. Most games of this type at least get harder as you progress through the levels with enemies getting faster or weapons becoming weaker. In 'Galaxy Wars' though any changes in challenge are so incremental it's hard to notice. The difficulty of the sixth stage seems identical to the first and the game is not a test of skill, it's a test of attention span. Like an 'endless runner' that doesn't get quicker 'Galaxy Wars' simply asks "how many times can you do this simple level without getting so bored you want to turn off?". It's a game for those with a lot time to kill, who simply want to test their patience.

Games that can be defined as "retro" are forever changing, with more and more titles getting added as the industry gets older. 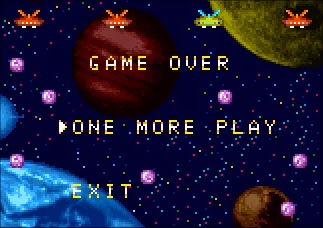 In this ever increasing pool of games there's more to compare and as such games like 'Galaxy Wars' get exposed for what they are; dated products of an industry finding its feet. Just because an old game is defined as “a retro game” doesn't mean all retro game players will enjoy it. Even a niche part of an industry has sub-sections, reminding us that the phrase "retro" doesn't always mean a game comes from the specific era we favour.

So, when asked if I prefer old games to new ones, saying “yes “isn't really true. Next time I'm asked "do you really like all these old games" I should be more honest. "No I don't like all old games, I only really go for the ones with Super Nintendo on the box".


Every once in a while a friend on Twitter who lives in Japan sends his followers a random Super Famicom game if they cover the cost of postage. My one condition was that (after my problems with 'Elfaria') the bulk it the text be in English. He sent 'Galaxy Wars' and let's be honest with a game this simple language barriers was never going to be a concern. Technically I got it for free but the postage was £5. It wasn't really worth this although the box is nice even if it gives unrealistic expectations at the quality if the game within.


To import games from Japan, eBay isn't your only option though. I always check on sites like Solaris Japan as often they have a game in stock cheaper than the final price it goes for on eBay. The also have a few gadget that removes any worry of getting charged extra at customs, so they're worth a look.
Posted by Julian Hill at 10/10/2014