An aging port of a game based on a forgotten past time. What could possibly not be relevant?

Released in 1994
Developed by Digital Illusions / Spidersoft.
Published by Gametek.

In the late eighties and early nineties, my brother and I would spend our summer days in arcades. So prevalent were these entertainment halls that it’s hard to believe that now they have almost completely disappeared. Any that remain are almost incomparable to the arcades of yesteryear, filled with toy grabbing machines and penny pushers.  The familiar sound of clanging metal pinballs and table bumpers has gone. There are not even queues of eager gamers itching to get on to the latest machine. The former arcade mainstays have become the exceptions, and this is solely down to profitability. When home consoles equalled and then eclipsed what an arcade machine could do, why would anyone pay money for a gaming experience they could have at home for free? To be popular videogame arcade machines had to offer something that couldn’t be easily replicated at home. This ultimately meant that traditional arcade videogames vanished and only dancing, shooting and “immersive experience” machines remained.

The popularity of pinball machines didn't necessarily decline, they just weren’t very profitable in the first place. This hardly made them attractive to an arcade owner. Ever since their inception in the 1960’s pinball machines offer essentially the same core game experience; use flippers to hit targets and keep the ball from reaching the bottom of the machine. Although the placement of table hazards and their themes may vary, all pinball tables are mechanical, which obviously means they require more maintenance than an electronic machine. Balls get stuck, lights burn out, switches need replacing and to make matters worse they take up about twice as much arcade floor space as other machines. Unlike a modern dancing or shooting machine where the playtime you get from a single 50p is often less than three minutes, an expert with a pinball could play for a very long time, earning replay after replay from a single coin.  The arcades could make much more money running a single toy grabbing machine than they make from a whole bank of pinball machines.


If you fancy playing some pinball nowadays, you have very little option but to boot up a digital version and play it on a home system. However, digital pinball doesn’t only exist because real life pinball has vanished. During the eighties and early nineties, companies were keen to capitalise on the popularity of real life pinball. Outside of the arcades a number of pinball inspired games emerged, but almost all were terrible. Nintendo’s first attempt the rather underwhelming Game & Watch Multi-Screen ‘Pinball’ didn’t even allow the ball to be aimed; it would bounce off a flipper in a random direction. Things weren’t much better on the NES, ‘Pinball’ by Nintendo, Hal Laboratory‘s ‘Rollerball’ and Rare’s ‘Pinbot’ were all individually ambitious, but the limitations of the 8bit system hampered the sense of realism while limiting the complexity of the tables.

'Pinball Dreams ' however was a world apart from these comparatively primitive titles. Originally the game was made for the Amiga by Digital Illusions; a small group of self-taught programmers, artists and musicians from Sweden. ‘Pinball Dreams’ was their first game and it quickly became regarded as not just a landmark Amiga title but also the defining moment for digital pinball across all systems. Key to its success was the realistic ball physics which is both subtle and sophisticated. "‘Pinball Dreams’ is a beautiful pinball game, closer to the real thing than any other attempt I've seen on any machine", wrote Stuart Campbell when reviewing the original Amiga release. "This game comes as close to matching the real thing as you're ever likely to get" agreed Neil West when he reviewed the game for Amiga Format magazine."The ball bounces and rolls as realistically as anyone could have hoped". When this lifelike ball was placed on four, at the time, imaginative and diverse tables, it was clear that Digital Illusions had found a winning combination. As a result ‘Pinball Dreams’ was a success with both players and critics, a game rewarded with both high review scores and massive sales. 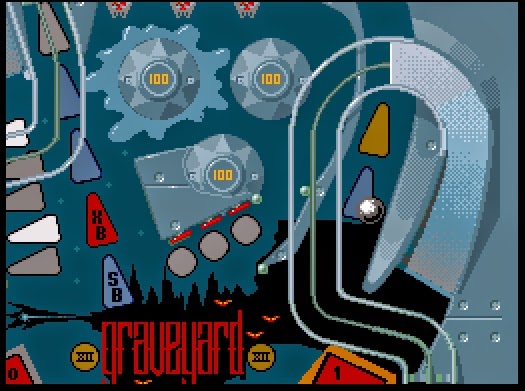 With such critical acclaim and commercial success it was inevitable that conversions of 'Pinball Dreams' would find a place on the home consoles. The Super Nintendo version however, didn't appear for two years and despite the wait rather than release a completely revamped enhanced edition, SpiderSoft made the decision to release a straight port of the Amiga version. As a result the graphics, sound and table selection are identical to the original. In fact, The only visual differences I could see between the two versions were clearly caused by censorship rather than technical demands; red "blood" under the top bumper in one table has been changed to blue and the crosses were removed from a graveyard. 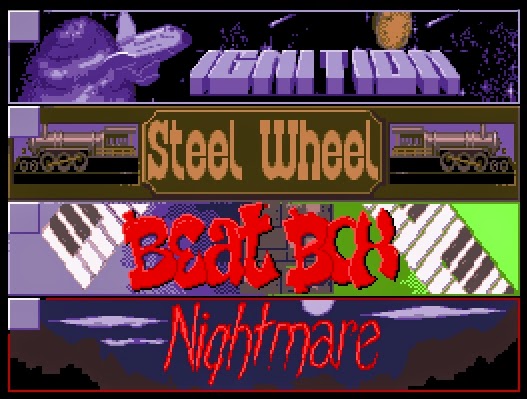 Like the Amiga original, the game features four tables – Ignition (a science fiction table), Steel Wheel (inspired by old western railroads), Beat Box (with a music theme) and Nightmare (which steals from classic b-movie horror clichés). This is pinball at its most traditional; you hit the flippers to propel the ball into the table with the aim of hitting the right targets in the right order. Doing so unlocks more of the table and allows access to more point giving targets. Point accumulation really is the aim of the game here, and the drive to keep on playing is simple to beat your own previous best score. 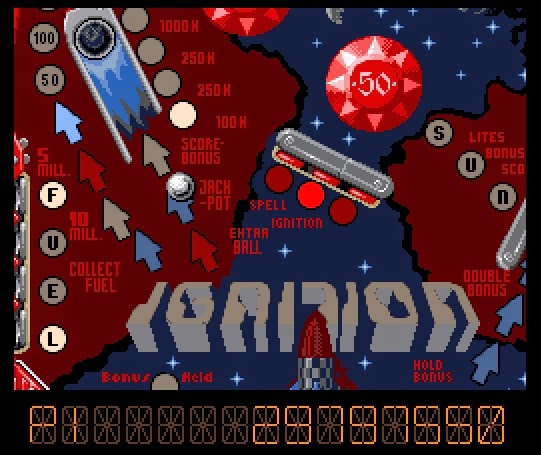 As it’s a straight conversion of an Amiga game, the graphics are presented in 2D but the table scrolls in four directions allowing you can keep track of the ball’s position as you play. If the game were produced from the ground up for the Snes it's hard to imagine the developers wouldn't have used the console's Mode 7 scaling and rotating trickery to great effect. It was an observation that also annoyed Tony Mott when he reviewed the game for Super Play magazine. "I don't understand why programmers aren't given more freedom when converting from computer to console like this" he raged. "It really is a missed opportunity. A perfunctory conversion which was crying out for major improvements during its journey to the Snes. But no one listened". 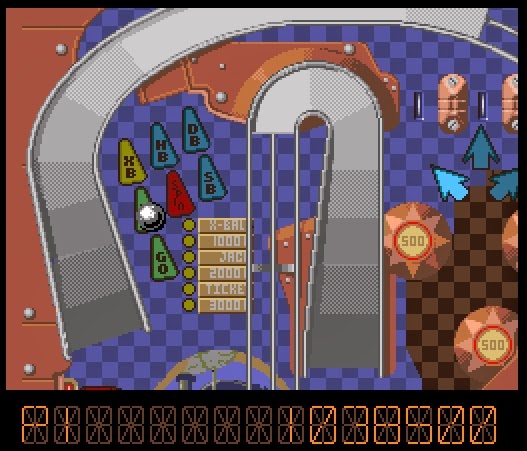 Looking at this as a Super Nintendo  title in its own right, it’s reasonably playable, good fun and certainly worth the money it often demands on eBay. However expectation must be scaled back as this game certainly doesn't compare to modern pinball simulations with their license tables and inertia physics. For a similar amount of money you could get 'Zen Pinball 2' with a handful of the digital representations of the greatest real world pinball tables. This would certainly be a more authentic pinball experience. When you compare 'Pinball Dreams' to its superior sequel 'Pinball Fantasies' you quickly realise that so much more could be done to make the game more varied and exciting. For example all four tables only feature two flippers and none have ball traps or cages that are typical of the more sophisticated real life tables.   Games Critic Stuart Campbell once believed that "like Cliff Richard, 'Pinball Dreams' is a game that will never really age. You'll be playing this for years to come". A modern player accustom to ‘Zen Pinball’ and 'Pinball Arcade' will no doubt disagree and wonder why there are no side-missions or tables specific challenges to do. While it's easy to appreciate how pioneering the game was more than 20 years old, nowadays it feels sparse and somewhat feature less. When the only goal in every table is simply to get the largest score possible within a limitless time frame, you have to wonder how much long term appeal there really is.

As with so many Retro Games, enjoyment of 'Pinball Dreams' is tied to nostalgia. If you owned it and loved it before then you’ll no doubt be able to forgive the game’s flaws. To long time fans, just hearing  Olof Gustafsson's fantastic music will feel like a warm familiar hug, but it's a product of its time. Without having enjoyed real world pinball tables, would the youth of today be drawn to a game like ‘Pinball Dreams’? Nintendo have tried several times to attract younger audiences, by publishing pinball based on some of their most games prolific franchises. If having ‘Pokémon’ and ‘Metroid’ on the box wasn’t enough to entice new players, it highly unlikely ‘Dreams’ would. Which limits ‘Pinball Dreams’ to only being an attractive purchase for those who have played it before and who aren’t interested in the more accurate simulations that the modern pinball games offer. It is somewhat impossible for me to judge if they are missing out. I’ll happily spend an hour bouncing a virtual ball around four somewhat empty tables. There may be better Pinball games out there, but none of these will either be able to offer the bumps and flips of familiarity that comes from launching a pixelated ball into a ‘Pinball Dreams’ table. 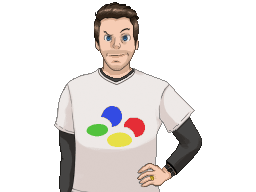 
While I may have loved the arcades for the Upright video games, my brother would always be drawn to the pinball tables. I didn’t own ‘Pinball Dreams’ on the Amiga, it was his and in many ways it was a goto Amiga game when we grew up. This is probably why he chose this game to give to me for my 33rd Birthday. What a relief therefore, that it is so close a match to the Amiga original. Sometimes all we really want, is what we already know.
Posted by Julian Hill at 4/24/2015