The appeal of 'Super Hang On' in the arcades was the novel control system. But without it is this racer worth your time?


Developed by Sega
Published by Sega
Released in 1993


To promote the Mega Drive, particularly in America, Sega promised to "bring the arcade experience home". From a technical standpoint this seemed to be a realistic goal. Games like 'Golden Axe' or 'Alien Storm' proves that arcade-like experiences are possible on a 16bit home console and Reviewers would frequently say how "arcade perfect" the conversions were. However for me, as a child, a trip to the arcades was more than the games played. The ambiance featured heavily in the experience. The sound of hundreds of machines vying for your attention. The sticky floors and the worryingly sticky joysticks. My local arcade sat on the seafront so the smell of fish and chips still reminds me of 'Street Fighter II', 'Final Fight' and 'Bubble Bobble'. Yes I could play these games at home, but I couldn't return to them at the end of the day and feel proud that a high score hadn't been beaten.


Arcades continued to get bigger and more popular between the late seventies and the early nineties. Suddenly it didn't seem to be enough to have a traditional arcade cabinet. Two player machines turned into four player machines. Guns and drums started to adorn upright machines. Before long, players were handing over a fair amount of money to sit down in a life sized car, or to spin in a gyroscope while trying to gain a high score. Arcade machines changed. No longer something you stood at, they became something you got in or climbed on. m 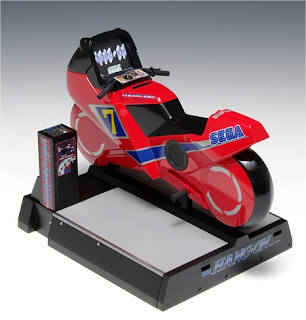 My memories of 'Hang On' are tainted by fear. To play the game in my local arcade you'd have to clamber onto a plastic motorbike and fling yourself from side to side to steer the onscreen character. I distinctly remember an occasion when someone tilted the machine to one side only to plow into their younger sister who had got too close. Much like the rider portrayed in the game, I can imagine over enthusiastic play would have lead to many a player throwing themselves from the bike. 'Hang On' seemed to be challenging because you had to concentrate on playing a game, while your body was fighting with inertia and gravity. It was impossible to bring this experience to the home as most houses don't have large plastic bikes to ride upon. So Without this novel way of playing, the gameplay is inevitably exposed and must accordingly be judged on its own merits. "With ride-on type games, I think the game has to be fun as an upright as well or there’s no point" 'Hang On' designer Yu Suzuki once said. "It’s somewhat ironic, but I aim to create games that do not rely on the fact they are ride-on game."


While 'Hang On' is probably best remembered for being one of the first motion controlled arcade titles it was also the first to use 16-bit graphics. According to EuroGamer, "Suzuki's designs for the game were all conceived in 3D, before being reverse-engineered to work in two dimensions." 'Hang on' was also the first game to use Sega's "Super Scaler" graphical technology. This dynamic scaled sprites at speed to create the illusion of motion. This technique quickly became the standard way of making sprite based racing games and can also be seen in Yu Suzuki's other titles 'Outrun' and ('Hang On's sequel) 'Super Hang on'. 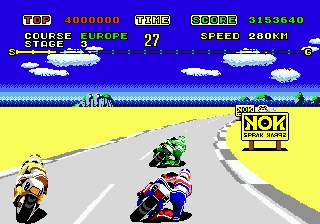 While the first game was sold on the MSX computer and was even built into some Master Systems. However, it was the sequel that really caught the public's attention. Given that 'Super Hang On' appeared on several Mega Drive compilations, it’s hard to imagine that many Sega owners didn't have access to a copy.


The premise of the game will be familiar to anyone who has played a sprite based arcade racer before. The player races along a road that's divided into several stages. Unlike 'OutRun' there are no branching paths and the sole objective is to reach the goal within the allotted time. Passing checkpoints extends the time limit and the game ends if the timer runs to zero. While there are other motorbike racers on the course passing them has no consequence. They are simply road based obstructions and as such the game is more like a time trial than a traditional race. 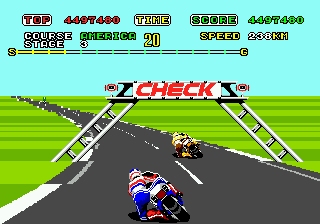 The Sega Mega Drive version of the game expanded the arcade game by offering a choice of four tracks to race on. Based on different continents, each one contains a different amount of stages. Africa is the easiest and shortest out of the four courses with six stages. Then Asia, The Americas and Europe get progressively harder with more stages to complete. Like the arcade the Mega Drive version also includes a Turbo button. This speed boost can be activated if the player reaches the normal maximum speed of 280 km/h. I found Pressing Turbo though made the motorbike almost uncontrollably fast. The pace of 'Super Hang On' certainly impressed The Games Machine magazine. "The speed of gameplay is nerve-tingling even without nitro-injection - real edge-of-the-seat action." Looking at the home computer port Amiga Action even claimed 'Super Hang On' was the fastest Game on the system. "No matter what other racing games you have played you won't be prepared for the speed and acceleration of 'Super Hang On'".


Game historian Keith Stuart believed 'Super Hang On' was a tipping point for console conversions of arcade games. "'Super Hang On' showed just how small the gap between 16bit mega Drive games and arcade titles could be." Critics at the time seem to be universally blown away by the visuals with one even claiming that "next to each other the coin-op and Mega Drive games can't be told apart". Critic Julian Rignal certainly approved of the visuals. "The graphics are tremendous, with a perfectly convincing road (complete with gut-churning hills) and excellent sprites giving a true feeling of high speed". “The look of the [Mega Drive] version puts the arcade game to shame" added a reviewer for Electronic Gaming Monthly. 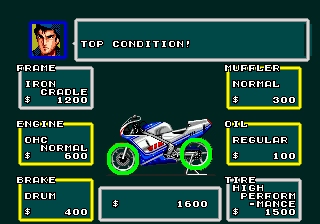 Exclusive to the Mega Drive version of 'Super Hang On' is the original mode. This plays like a motorbike RPG where success in a race allowed you to recruit sponsors and earn money to buy enhanced components for the bike. It's a nice feature that adds longevity to a game that would otherwise get pretty samey pretty quickly. "Making an arcade game is sort of like condensed milk. It’s important to condense a single theme down further and further, to fit inside a 3-minute period" designer Yu Suzuki astutely notes. "But it's different with a console game. Once purchased, people will at least give it a go for 30 minutes, right?" Mean Machines magazine certainly appreciated Yu-sans attempt to expand 'Super Hang On'. "The choice of game type adds a lot to the playability as the "original mode" gives you a feeling of planning for a season rather than a single race". 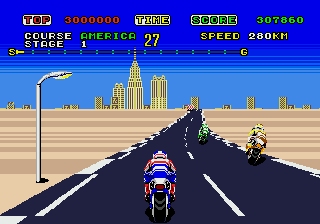 Given that Yu Suzuki designed 'Outrun' in between the two 'Hang On' games it's not surprising some of his finest work has been borrowed for 'Super Hang On'. Accordingly, before starting a race the player can choose between four different music tracks. 'Hang-On's chip tune music was notable for introducing digitised drum sounds. The music in the follow up, while not as memorable as 'Out Run's is still catchy, although I find it slightly dated. Others seem to like it enough to demand a Vinyl release in 2016. This certainly suggests it has a fan base, maybe appreciating nuances that passed me by.


"If Miyamoto was the father of gaming, I suppose that makes me the mother," Suzuki once told the 1Up website. "The difference between Miyamoto-san and I is that he takes the same game and takes it deeper and deeper, like with the 'Mario' series, while I like to work on different games and concepts," says Suzuki. "I don't like doing the same thing." While he may claim to continue to innovate, mastery of sprite scaling made a lot of the designers early work feel similar. 'Space Harrier', 'Super Hang On' and 'OutRun' clearly all share the same DNA. While there's more going on than a swap of a car sprite for a bike sprite, there isn't much more. Both titles have been turned into 3D enabled 3DS games. When I was presented with a choice of which to buy I opted for 'OutRun' and there wasn't much deliberation. There is a warmth and style to that game that seems to have never been replicated, by Yu-San or anyone else. In arcades unique controls helped to separate the games but on a home console the similarities are all the more apparent.


So while Sega could bring arcade games home, on the Mega Drive at least, they failed to bring the entire experience.

Where did I get this game from?
When you buy a bundle of games, you get some good, some bad and some you barely even register. 'Super Hang On' was a game I feared so I never would have played it again were it not included in a bulk buy.
Posted by Julian Hill at 9/29/2017