'ActRaiser' is a game that mixes Simulation sections with Action platforming. In theory, there is something here for everyone. So why has no one heard of it?


There's a logic to waiting before you buy a newly released modern console. Protracted development times, increased production costs and elevated expectations mean so few games are ready for when a new machine leaves the starting blocks. Infact, two years into the PS4's life and gamers still struggle to make a definitive list of twenty must have games.

It's a stark contrast to the 16 bit era when a two year old console had more stand out titles than you could ever get around to playing. Perhaps it was because the lifespan of each console was shorter, but then, rather than now, big publishers were happy to release games as quickly as possible. In the first six months of the Super Famicom's life there was a flood of games, so many in fact that it was easy for incredible titles to go unnoticed. 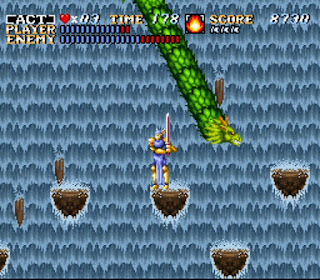 When my friends on the 'Maximum Power Up' podcast recently listed their favourite Snes games, 'ActRaiser' was an honourable mention. I was shocked by this, not because it's a bad game but because I'd never really heard of it. At best I recognised the title, but I couldn't tell you who published it or even what type of game it is. The later at least is vaguely excusable because developers Quintet didn't know what type of game 'ActRaiser' is either. Part side scrolling action game, part city building God game 'ActRaiser' is arguably best described as the love child of 'Zelda 2:The Adventure of Link' and 'Sim City'. It was a novel idea and to be frank, I don't know of any other game that attempts to "combine pulse-stopping action sequences with intelligent simulation sequences" - to quote the American packaging. "Neither the simulation of the platform game are very special on their own [but] they work together to produce a really well rounded and entertaining whole" noted Super Play Magazine. The strength of 'ActRaiser' is the fusion of the two disparate gaming styles, exploring the ways they can influence one and other. 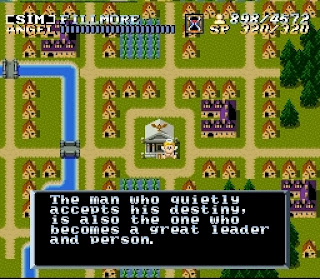 Having said this, the arrival of the first simulation section does come as a surprise (especially if you bought the game based on some advertising that didn't show the simulation aspects at all). Naturally, the city-sim sections start off simply, with the bulk of your time spent defending your town folk from monsters that pop out of liars strewn about the areas. Fighting these foes actually feels more like a simplified vertical shooter. All it actually involves is using your Cupid-like servant to pacify the invading hoard long enough for your populace to seal the monster liars permanently. Your reward for doing this successfully is an offering from the villagers. These offerings typically give you a new magical skill or increase your characters health and magic gauges ; strengthening your character in the side scrolling sections. 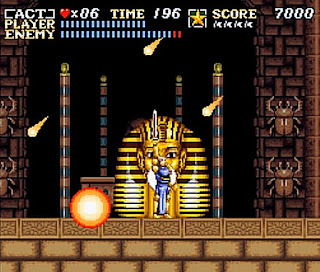 One offering entitled "magical star dust" specifically is a must, after all, nothing says "all powerful God" more than a hailstorm of fire.  You'll also have access to a slew of powers that you can use in the simulation mode; lightning, earthquakes, floods. Admittedly, none of these would seem the best ways to encourage your autonomous towns to grow, however used in the right ways these destructive forces allows you to encourage growth. Lightening for example clears the forests that block town expansion and floods bring vegetation and water to arid deserts. As is often the case in 'God Games' though , the temptation to sling a natural disaster at a perfectly happy town is always strong, even if it'll prevent you progressing to the next platforming stage. After all, progression to the next stage only occurs after the people close the last monster lair in town. 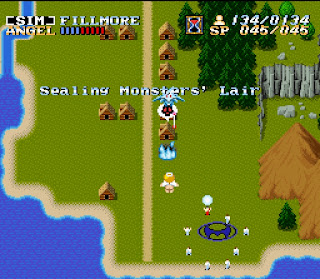 Once they have done this a final larger portal to a side scrolling boss fight opens. In true 'Zelda' style, the game hopes you use the skill you have unlocked in the previous simulation section to beat the beast. In reality though, the "magical star dust" is so hilariously over powered you'll find no reason not to use it, unless of course you wish a boss fight to last longer than a minute.

'ActRaiser' follows a formula throughout all of its six stages. It's always an action stage, followed by a simulation stage and then concluded with a boss fight. There is variety though as the games varies terrain as you progress. There is also a lot of back tracking and plate juggling as you have to return to previous stages, while you're working on later ones. It seems the second their deity leaves, society collapses and problems arise. For example everyone who's played this game remembers the man in the desert. 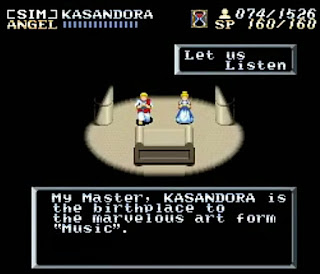 In the town of Kasandora you'll watch helplessly as a man gets lost in a desert and dies. To celebrates his life, the town somehow becomes "the birth places to the marvellous art form "music"", essentially inventing music in tribute. As the game explains "music has mysterious powers, by listening people can calm their hearts and soothe their pains". For a game to place such great importance on music it would be hilariously ironic if it had bad  music, but fortunately 'ActRaiser' offers the most overlooked scores in video game history. Composer Yuzo Koshiro started making music for NES games back when he was 19 and he is still active to this day. While he has scored game series like 'Streets of Rage', 'Shenmue' and 'Shinobi' he still credits 'ActRaiser' as being his best work. The music in this game fits almost every situation perfectly. Epic and mesmerising during  action scenes, sad during the more morbid moments and peacefully classical during reflective scenes. It would be wrong to say it topples the likes of 'Chrono Trigger' or 'MegaMan X' and has the best soundtrack on the Super Nintendo but it easily in the top ten. You don't even have to settle for the 16 bit rendition of the score either since there's no shortage of orchestral renditions and fan made remixes all over the Internet. Not that you really need to though, since "it's like there's a full orchestra inside the Super Famicom" to quote game critic Julian Rignal.

According to Mean Machines magazine 'ActRaiser' has "the best music ever heard on a console or computer" and the game was awarded "Best Music of 1993" by Electronic Gaming Monthly. With such an acclaimed soundtrack it really does make sense that music is a powerful force within the game. Once "invented" for the funeral, you can take a sample of "music" back  to a previously cleared but now troubled town.  The powers of Yuzo Koshiro's moving melodies is all that's required to cheer people up and once again the town returns to peace. As the box notes, the game essentially tasks you with "bringing order to chaos" and music rather than conflict it seems, is sometimes the best way to achieve this. It's puzzles like this and of course the unsubtle religious story which add some depth to the game, something that's pretty rare for games of that era. 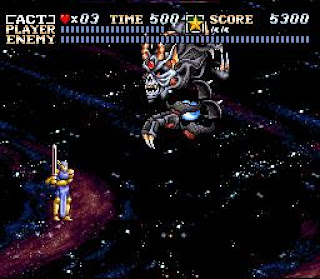 The game is known for its challenge and the difficulty reaches its peak in the final region. First you have to deal with the six bosses from all previous regions again, one after the other. Only then will you be able to fight and ending boss Tanzra who is the devil in all but name. Interestingly In the original Japanese version, the protagonist is referred to as God, and the antagonist is known as Satan. According to programmer Douglas Crockford, Nintendo of America had a strict policy regarding game content which prohibited the inclusion of any overtly religious themes. This explains the new name for the games antagonist and why the playable character of the game  had to be referred to as  "The Master". Of course the fact he travels the globe in a palace on a cloud, accompanied by an angel; slays demons; creates life; performs miracles; and is worshiped by the populace of the world, does make the censoring pointless as it obvious whom The Master really is. 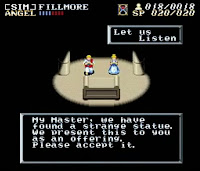 Although the release was delayed in the west, in Japan 'ActRaiser' came out within 6 months of the Super Famicom's release.  Like most early games for the system, developer Quintet (who would later be best known for 'Illusion of Time')  clearly felt obliged to show off as many of the fancy new tricks the Super Nintendo could do. "Finally experience a game that fully utilises the advance capabilities of the Super Nes" boasted the games' box. Nothing quite screams new gimmicks more than an ostentatious Mode 7 title screen and true to form, right from the start its rippling logos and dramatically scaling sprites. As was so often the case, the excessive use of Mode 7 may have seemed impressive at the time, but now its aged terribly. Indeed, spinning scaling maps are now such a common sight in early Snes games you have to wonder if it was ever really a novelty. Beyond this though the game looks appealing.

The graphics aren't to the lofty standard of the music but it's easy to see why so many reviewers got excited by the visuals . "The graphics are outstanding" said Mean Machines magazine, "crammed with amazing attention to detail" added Retro Gamer magazine. 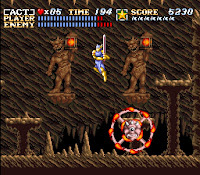 "With beautifully drawn parallax backdrops and beautiful presentation, make no mistake - the [action] sections of the game are a really important part" argued Jason Brookes in his review for Super Play magazine. "But it's not so much the strength of the individual sections as the way they're combined that gives 'ActRaiser' a the-whole-is-greater-than-the-sum-of-the-two-halves quality."  It's bizarre that the sequel tried to fix what wasn't broken, by removing the simulation and focusing on the action segments . In so doing they made the original 'ActRaiser' even more unique and it's hard to think of another 16bit game that uses this exact same genre combination. As Retro Gamer magazine once remarked "Quintets 16-bit classic remains one of the most innovative games on the Snes, delivering a mix of action and simulation that no other game has ever been able to match. Games that straddle the genres are always a difficult sell, so it comes as no surprise that 'ActRaiser' didn't find the fan base it deserves when first released". It's an overlooked classic that somehow got lost in the melee of games released at the start of the Snes' life.

Where did I get this game from?
I wouldn't own this were it not for the kind generosity of a Twitter friend. I wanted to buy 'Illusions of Time' from him and he insisted I had this game as well. Apparently they form half of the "Quintet Heaven and Earth" series. The slight problem is that another game I'd need for the series is 'Terranigma'; one of the most expenses games you can buy for the Snes. You cant fault generosity though, even if it sets you down a very expensive rabbit hole.
Posted by Julian Hill at 10/09/2015