Regardless of its genre, platform or age there are essentially two ways to sell a game. If it’s good hopefully recommendations from friends or critics will prompt commercial success, but just as attractive to a potential audience is the reputation of a name. It’s a sad truth that it seems most games that sell in large numbers fall into the latter category.
If all your online friends are flooding your social media feeds with a specific title, it will unintentionally seep into your consciousness meaning you will be drawn to it when you see it for sale. Just as likely though, is seduction by branding.  If past experience means you associate a name with quality, when you see a new thing with that name you will naturally presume it to be good. Brand familiarity sells, which is why games that license a name, or are based on an existing property dominate the sales charts. Sequels, spin offs, games based on films and TV will be therefore less of a risk for publishers and conveniently they are in some ways easier for developers to make. They no longer have to develop original ideas or even spend time making a good game since (as long as it bares a passing resemblance to what has come before) customers will lap it up.


A greater chance of success does not come easily though and the ‘licensed game’ developer has problems to overcome that other studios do not even need to consider. Most significantly they have to work out how to translate and adapt something to fit the limitations of a new medium. Developers too are often pressured by movie studio execs to have the game ready for release alongside the movie, which can truncate production time.

Elongating the plot of a two hour movie into a twenty hour game can lead to a lot of un-desirable filler material or insensitive embellishment of story. The biggest problem though is one of funding. Despite what one might expect with a title based on a lucrative property, there is usually a smaller budget than on other similar games that are unlicensed. A significant amount of the funding that would normally be allocated to actual development has instead been spent just buying the license in the first place.

There’s a negative stigma attached to licensed games, deserved because the number of poor games exceeds the good titles, many times over. The exceptions though all seem to be based on long standing properties released years after the source material as this has removed the time pressure that usually compromises quality.  ‘Super Star Wars’ is one such game, released exclusively on the Super Nintendo in 1992, some 15 years after the first ‘Star Wars’ film (or if you were born after 1999 the fourth film). 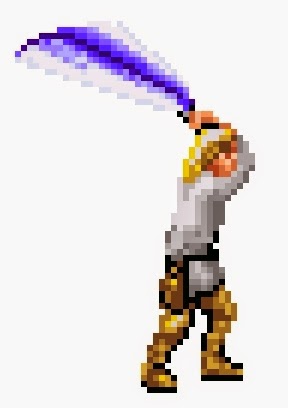 ‘Super Star Wars’ is a side-scrolling action platformer defined by a ludicrous amount of action that's been tailored around the narrative of an already action-packed film. It was a genre that producer and designer Kalani Streicher was very familiar with, being an “avid gamer and a big fan of platform side-scrollers.” Streicher has impeccable taste, listing ’Contra’, ‘Super Castlevania’, ‘Turrican’ and ‘MegaMan’ as his favourite games and their influence certainly shows in ‘Super Star Wars’. Present and correct are exciting weapons, a cacophony varied enemies, screen filling bosses, daring jumps and deadly traps; everything a player would want from this style of game.

At the time, ‘Super Star Wars’ was the most complete video game adaptation of the classic movie's plot. “From the beginning” recalls Streicher “I  wanted to tell the story of the films in an interactive fashion adding as much content as possible from the ‘Star Wars’ universe.” 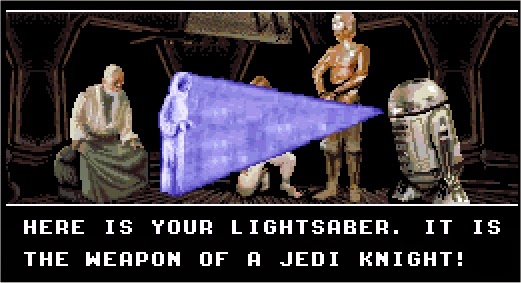 It’s a game made by a huge “Star Wars’ Geek” and as a result everything a fan of the films would want is in the game. You start off as young Luke Skywalker in the desert of Tatooine, you rescue the droids C-3P0 and R2-D2, you travel to Mos Eisley, listen to the band, find Chewbacca with Han Solo and then the whole gang ultimately ends up on the Death Star, saving the princess before blowing the space station out of the sky.

Everything that Streicher personally loved got worked into the game. He preferred the rouge smuggler Han Solo to the prim Luke Skywalker so you get to play him in later stages. The game also features several Mode 7 style vehicle based levels, partly because Streicher liked ‘F Zero’ so much and wanted to see how that would work within a Star Wars environment. In these vehicle sections the player takes control of a Land Speeder or at the end an X-Wing fighter when you are offered the opportunity to confront Darth Vader and destroy the Death Star. 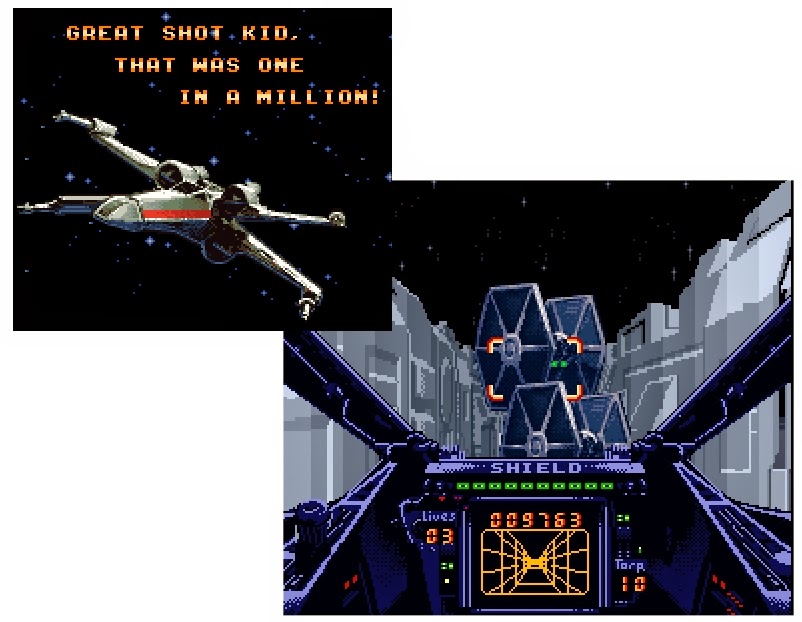 The gameplay therefore was more varied than most run-and-gun platform adventures, it included driving and flight simulator elements too.

I’m always a little confused when hardened fans praise the game for being accurate to the source material, when in reality huge liberties are taken. What is even more surprising though is that Lucas Film, a company known for being protective of their intellectual property, actually designed the game in house (although the programme and technical implementation of working with the console was handled externally at Sculptured Software). The familiar story is told in glorious cut scenes, which were a fairly recent innovation in 1992. Though these are true to the film, the levels are telling a very different story. 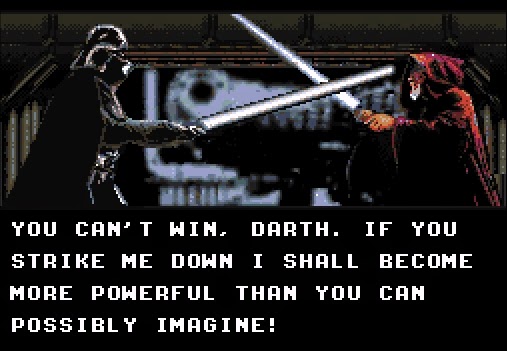 As animation Supervisor Jon Knoles explains in the ‘Rouge Leaders’  book “we really went off the deep end with cannon and authenticity. But that was okay. The [16bit look and] visual effects created a clear separation in the audience’s mind between a small-screen interactive game and a big screen blockbuster”. Perhaps fans were willing to overlook the obvious story disparities in exchange for digitized freeze frames from the movie and an excellent chip tune version of the John William’s entire iconic musical score.

As Ign put it when reviewing the Virtual Console release, ‘Super Star Wars’ is “not so much an adaptation of the film [it’s more like] some kind of alternative reality telling of the tale, where Luke, Han and Chewie are all ruthless killers. Their aim is not to save the galaxy but to destroy it before the Empire has the chance, and their individual blaster guns pack more firepower than the Death Star itself.”  The beginning middle and end of the game’s narrative is the same as the film's, it's just the details that are very, very different.

‘Star Wars’ fanatics might be taken a bit aback by the fact that Luke fights and kills the Sarlacc Monster (from the source films second sequel ‘Return of the Jedi)’ in the very first stage of this adventure.  Likewise Instead of simply buying C-3PO and R2-D2 from the Jawas (as he does in the film) Skywalker must use his land speeder, which is now outfitted with lazers and turbo boosts, to catch up with their sand crawler. 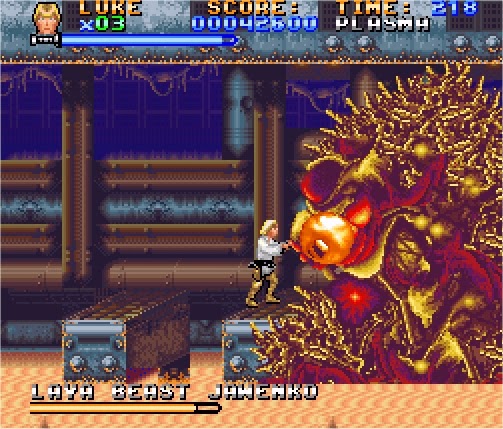 Once within range of the vehicle he then must fight his way to the top of it while leaping from a series of moving conveyor belts. In the process this mild mannered peace keeper, will indiscriminately kill anything in his way. It seems he takes after his father after all. Even more questionable for a ‘Star Wars’ zealot is that R2-D2 is being defended by a screen filling Lava Beast. It’s another alterations that may make ‘Super Star Wars’ a better, more high-energy action experience, but it also makes it less like the source film and more like a tribute to ‘Super Metroid’ or ‘Super Probotector’.

Like those games, ‘Super Star Wars’ is brutally hard to progress in. This was a conscious decision from Streicher, who certainly was not aiming for an audience which would today buy the ‘Lego Star Wars’ games. “These were difficult games [because] we were aiming at the hardcore player. I defiantly could not deliver such difficult games today. It has to be a challenge; the player needs to feel like they are earning The Force”. Though the game offered three difficulty settings, only the easiest will allow the majority of players to see beyond the third or fourth stage. Sadly though it’s not just the huge swarms of enemies or clever level design that cause the challenge, other cheaper annoying game traits contribute. One of the biggest problems is that the deaths are so unfair. 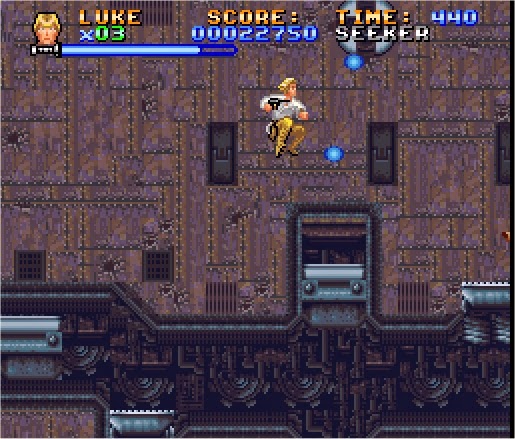 Every time you get hit by enemy your avatar falls backwards, always irritating but nearly game breaking on the Sand Crawler stage or the Tatoinee cliffs stages. In these levels a misplaced landing can mean either instant death, or having to restart the level and failure often feels unavoidable. Consequently, any sense of achievement is often overshadowed by a sense of plain relief that a poorly planned section is over.

At least (like in the ‘Mega Man’ games) if you’re going to have to replay a levels a lot, they’re levels that are attractive. ‘Super Star Wars’, as Super Play puts it, looks “magnificent, almost good enough to justify the price of the game on its own”. Detailed well animated playable characters inhabit rich varied worlds, defined by subtle visual effects and huge palettes.  “I wanted the visual quality of an arcade game” explains Streicher. “It had to live up to the then-in-the-arcade ‘Star Wars’ machine [so] we were constantly pushing the Snes”. It shows as Matt Bielby notes in his review. “The big fault is the old Snes bugbear of slow down. Some of the platform sections in particular almost grind to a halt when lots of characters walk on screen”. However despite this fault, Bielby was glowing in his praise a view echoed by Jaz Rignel in Nintendo Magazine System. “‘Super Star Wars’ ranks as one of my favourite Super Nes games” he wrote, “a milestone in movie tie-in which shows just how this type of game should be done.

Ultimately, the truest measure of a “movie tie-in” worth is to try and ignore the fact it’s a licensed game. Gaze past the familiar characters or aesthetics, mute the recognisable music and skip past the plot. If the game you are now playing is actually a game you’re enjoying playing it really doesn’t matter if it’s based on something or not. ‘Super Star Wars’ isn’t enjoyable because you play as Jedi Luke with a light sabre, it’s would be just as good if you play as Space Swordsman Keith wielding a glowing stick. ‘Super Star Wars’ in one example in a sea of mediocrity that proves that not all licensed games are best ignored, even if the difficult may mean that perhaps they should for the more casual players. In essence ‘Super Star Wars’ is the antithesis of what a licensed game should be. A mass-appeal title that is best consumed by a niche audience who don’t mind artistic license or an almost insurmountable challenge.

Where did I get this game from?
This was bought in a batch of games from an online friend as has been bizarrely ignored since I got it about 16 months ago. I got it as in a trade of old games for a new release, and I dare say that it has maintained its value more than that game would have.