There a few games more recognisable than 'Pac-Man' but is there much appeal to such simple gameplay for a modern audience?

Developed by Namco
Published by Domark / Tengen
Released in 1991

A man sits opposite me on the London Underground listening to excessively loud electronic dance music through his Beats headphones. His jeans are rolled up and the top button on his shirt is done up beneath his neatly trimmed but still luxurious hipster beard. He reaches into his bag to change the track and I can't help but notice that his trendy vinyl man-bag has the 'Pac-Man' maze on it, complete with ghosts stalking the circular hero. It strikes me that our fashionable friend is no older than twenty which means he is nearly half the age of the first recognisable character to appear in videos games. In all likelihood he has never played the the original game yet he still has bought and wears a bag decorated in its visuals.

Everyone recognises Pac-Man it seems. The awful film 'Pixels' used him prominently on the poster, knowing that his presence would make it immediately clear to movie goers that this was a film that references games. Indeed, According to a report by the Davie Brown Celebrity Index Pac-Man was recognised by 94 per cent of US consumers, surpassing Mario and Lara Croft.

The continuing awareness of a character based on a Pizza with a slice missing is undeniable and would be of immense satisfaction to the character's designer Toru Iwatani. From the outset he purposely wanted to make a character that was recognisable and appealing to all. "In the late Seventies, videogame arcades [...] were just playgrounds for boys, and the only videogames on offer were brutal affairs involving the killing of aliens,” he remembers. “My aim was to come up with a game that had an endearing charm, was easy to play, involved lots of light-hearted fun, and that women and couples could enjoy.” Iwatani was adamant that no one would be confused by the characters or game so aimed to make both as simple as possible. "As design concepts, both Pac-Man and the ghosts have simplicity and endearing charm,” Iwatani says, suggesting that the accessibility and innocent made it the only game appropriate for child gamers of the day.

Iwatani’s ability to attract all kinds of gamers, rather than just teenagers keen on blowing up aliens was fruitful. “Overseas, it was a massive hit – people who normally didn’t play videogames became avid fans, and there was much media coverage of the playing of 'Pac-Man'” he recalls.

'Pacmania' is a 3D-esque version of the original 'Pac-Man' game, originally created for the arcades but later ported to practically every home computer and console. Nowadays the game would be called a re-imagining. It's a new interpretation of the original game with updated visuals and additional game mechanics. It was designed to build on the original rather than reinvent it. It's unmistakably 'Pac-Man' but much more varied than the original.

As such the Pac-Man of 'Pacmania' is still a ball-like creature, although now he of course a sphere not a circle. While he still has the distinguishing giant mouth and eyes he lacks the other limbs that were introduced in 'Pac Land'. But naturally the character defining insatiable appetite is present and correct. Consequently, the object of 'Pacmania' is the same as the original game; you just guide Pac-Man around a maze eating all the pills available while avoiding any ghost which inhabit it. Traditionally the Pac-Man of 1980 could only harm his ghostly adversaries by first eating a larger power pill. This turns the ghosts temporarily blue and while in this state they too can be eaten by Pac-Man. Once munched they are temporarily removed from the maze, allowing Pac-Man greater freedom to explore the level. In the original 'Pac-Man' using up all the power-pills would mean Pac-Man is unable to defend himself from the ghosts, however in 'Pacmania' our circular hero can also leap over them. 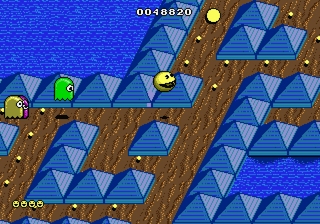 This tiny innovation opens the game up significantly; presenting many different ways to approach a level. However, in later stages the ghosts copy this ability, retiring a balance of power. Without this advantage a player's best bet is to keep an eye on the centre of the maze. While originally point building fruit used to appear here in 'Pacmania' you'll also come across upgrade pills. The green ones will increase your speed and the red pills will have the same effect as the conventional power pills with the added bonus of greatly reducing the ghost's speed. Mean Machine's magazine were quite a fan of these two new defensive options for Pac-Man. "the "Pac boosts" adds a new aspect to the gameplay" they noted, adding "Pac's jumping ability stops you getting into any instant death positions". 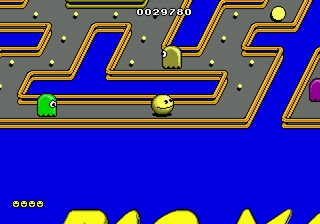 Eating all the yellow pills in a level takes you to the next one. While in 'Pac-Man' these all looked and played the same In 'Pacmania' there are four worlds for you to eat your way through: Block Town, Pac-Man’s Park, Sandbox Land and Jungly Steps. The maze layouts differ between stages as do the visuals. While the world's repeat the palette changes does make them still feel fresh.  In true arcade style once you've finished all these worlds you will be able to go through all of them repeatedly with subsequent iterations increasingly the challenge.

Even though 'Pacmania' has animated interludes between levels these really are just humorous instructions rather than fragments of a more complex tale of revenge and love lost. Despite what many claim, I really don't think the classic 'Pac-Man' is a social commentary reflecting 1980s consumer culture. Yes Pac-Man may be eating pills but that doesn't mean he is some sort of drug addict and I really doubt the ghosts symbolise different states of drug dependency. 'Pac-Man' may have offered the first recognisable gaming character but his game didn't offer the first gritty narrative in video gaming. 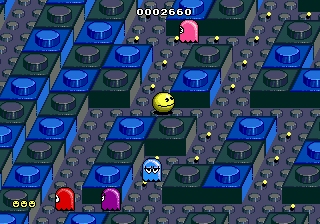 Not everyone agrees with the revisions seen in 'Pacmania' though. Entertainment Weekly claimed that the isometric view presented in the game limited the player's ability to move around the maze tactically. "The 3-D allows you to see only a relatively small portion of the maze at a time, making it hard to tell how many pills are left to be gobbled up or where your enemies are coming from."  However, I think a closer view made the game much more attractive. The Mega Drive version is a close reflection of the arcade original with smooth scrolling and sprites that, while basic, are well defined. Critic Julian Rignal certainly agreed with this believing that 'Pacmania' is "a very slick conversion, and features every aspect of the coin-op, from the crisp graphics and wacky tunes to the neat intermission screens between levels." This was something fellow reviewer Edward "Rad" Laurence agreed with. He believed that "visually, there are few differences between Mega Drive 'Pacmania' and the arcade version. It adds an awful lot to the old 'Pac-Man' formula, [and] the 3D angle make the game much less predictable."

When playing 'Pacmania', Pac-Man always remains in the centre of the screen meaning there's no chance of surprise attacks from off-screen ghosts. The (now) spherical hero is also responsive to control inputs, so any deaths really are the fault of the player. Admittedly there are times when you have to circle around the level trying to find the pills you have yet to eat, but again that's your own fault. A true 'Pac-Man' aficionado will know that success depends on a methodical approach and making maximum use of your power-pills.

I must confess, having played the game a lot on the Amiga as a child I remember the music being a lot better than it is. The level tunes are generally shrill and slightly irritating, with only one track being of note. The music of Jungly Steps is noticeably bad, by far the low point of the whole game. For some reason it's spooky but it certainly isn't pleasant. Thankfully you can turn the music off leaving the all too familiar "waccka waccka" sounds to be heard in isolation. It's part of what makes the game unmistakably a 'Pac-Man' game and referencing the original is no bad thing.

The original game's designer Iwatani believes that "'Pac-Man' is complete to such an extent that to add or to subtract anything at all would be unacceptable”. I think the extra ability to jump in 'Pacmania' is a sympathetic and appropriate extra touch. The additions improve rather than subtracts from the experience.  Ace Magazine however seemed to agree with Iwatani, believing the changes tarnish the originals great legacy. According to them "'Pacmania' is a wasted opportunity to bring a classic game to the Mega Drive". Luckily Ace Magazine got their wish as a more authentic classic 'Pac-Man' experience was also released on the Sega 16bit machine.