If you were to think of everything you would expect in a fighting game it’s likely that on the list would be a desire for a huge roster of playable characters. You would expect long complex move combinations usually involving rotating the D Pad. You no doubt would imagine pointless but fun stories of revenge behind the button bashing and you would certainly want a two player option. ‘Super Punch Out!!’ has none of these elements. You play as one character with 4 basic moves all involving simple button presses.  There is no story beyond what you choose to imagine yourself and if you have a friend in your front room all they can do is watch you play. Despite all this, ‘Super Punch Out!!’ remains one of the best fighting games you can play on the Snes. 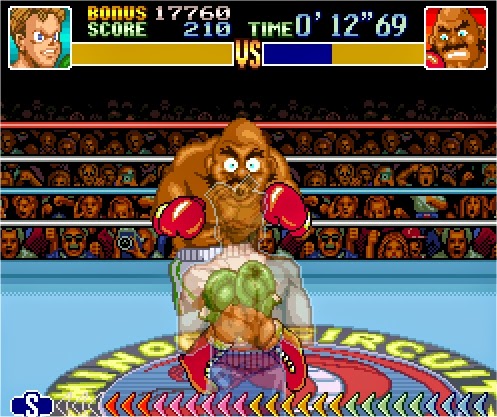 If success in games like ‘Street Fighter 2’ is defined by speed and a player’s mastery of the complexities of a character, ‘Super Punch Out!!’ could not be more different. In fact even though both games involve punching an opponent until they collapse, parallels between the two are actually pretty minimal. Bizarrely if I had to describe ‘Super Punch Out!!’ to a new player, I would more likely reference detective games like ‘LA Noire’ or the ‘Phoenix Wright: Ace Attorney’ series.  You may be able to win the first few fights by hammering one punch button, but unless you sit back and play the game properly you will not get much further.

‘Super Punch Out!!’ is actually less about punching and more about reading the opponent; looking for the tell tale signs of their intentions and learning their unique fighting style. One fighter will always throw two left jabs in a row: once he throws one, you'll know to dodge the second and clout him a counter-punch to do damage. In starting fights these patterns are signposted by a character doing or saying a unique thing prior to throwing a punch. In later stages though things become far more subtle and pattern recognition without visual or audio clues is required.  Each opponent feels almost like a reaction-based puzzle in which you have to figure out what attacks he uses, how to spot and dodge them and how to capitalise on them to attack him back with counter-punches. You could argue that game play is then simply a series of ‘quick time events’ only without on screen button prompts. If this is true it doesn’t dilute the thrill you get once you realise a pattern or giveaway signal. Determining how to beat an opponent is always more satisfying than resorting to furious button bashing which seems to be a short cut to victory in so many other fighting games.

It’s really a thinking gamers’ fighting game and a player who is rubbish at traditional one on one brawlers, can actually do better than a seasoned pro as long as they take the time to study the boxers they are up against. 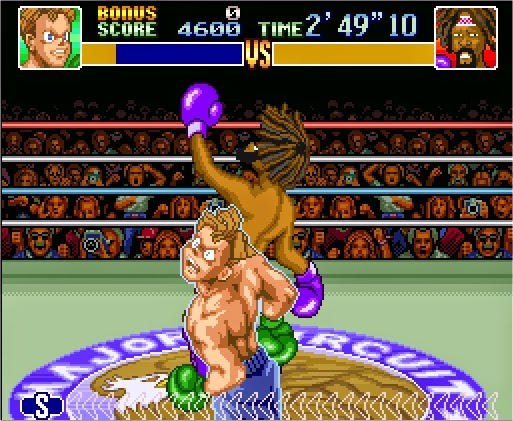 ‘Super Punch Out!!’ is often considered to be the sequel to the NES release ‘Punch Out!!’ but in actual fact it’s the fourth game in a series that started out in Japanese arcades. While it is could be described as a boxing simulation it bares only a pacing resemblance to the sport. Players have just one round to knock their opponent to the mat three times. Additionally, although the playable character, Little Mac, sticks to only regulation jabs, hooks and uppercuts it seems his opponent can fight in any manner they wish. Spitting, kicking and crushing seem to all be allowed in the ring and an opponent could in theory do nothing but these illegal moves and still win the match. Technical scoring is non-existent in the circuits of the World Video Boxing Association (WVBA).  If the player doesn’t floor their opponent in the allotted three minutes they will lose, even if they have more remaining health and have dominated the match up until that point.

Consequently, the game feels very much like the original arcade games, which was producer Genyo Takeda’s goal. While the NES lacked the technical prowess to faithfully replicate the popular arcade games, Nintendo’s 16 bit console was up to task. 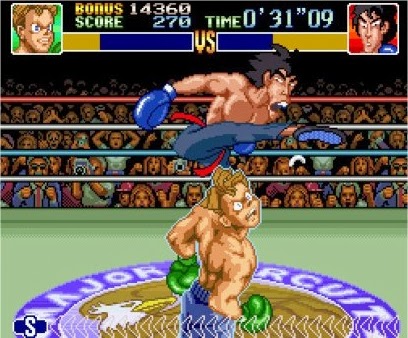 It looks sensational with large sprites oozing character and vibrancy. Each is wonderfully animated and detailed enough to include the giveaway ‘tells’ that are so integral to the gameplay. Both boxers take up a huge amount of the screen, however due to some clever transparency effects your view of your opponent is never obscured by the playable character. Each boxer you face is unique (with the exception of the last two twin bosses) and all are dripping with personality. Some are based on the Shigeru Miyamoto designed characters from earlier releases, but all are humorous cartoony parodies or stereotypes. From Jamaican ‘Bob Charlie ‘ the reggae-loving boxer, to an angry Clown, via a Bruce Lee lookalike ‘Dragon Chan’ there is a drive to play on just to see who you'll fight next. 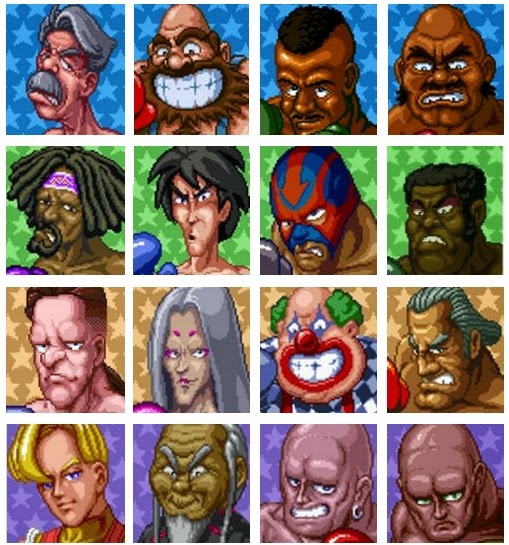 Tony Mott in his Super Play review seemed to agree saying “these guys actually have personality, so much so in fact that you almost feel guilty”. I’m not sold however on the new look for the playable character Little Mac. In earlier releases, technology may have limited his size but the result was a David and Goliath style fight, where you always felt for the Rocky-esque underdog.

Clearly his redesign from weedy brunette, to a muscular blonde pretty boy was a last minute one as early beta photos and trailers show Little Mac in his original NES ‘Punch Out!!’ design. It is unknown why or when it was changed, but I do think it’s a shame and I’m pleased later games in the series returned him to his original look.

The music too is rather disappointing. The whole game was scored by Takashi Kumegawa and a programmer called Masaru Sakakibara. The tunes themselves are ok, there just aren’t enough of them and the repetition grates quite quickly.  What’s audibly far more exciting though is the charter voices. 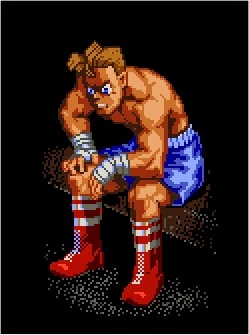 Nowadays, hearing a human voice in a game is taken for granted, but 20 years ago this was a rare treat but retrospectively the the character’s voices take on even more significance. Evidently, all opponents and the game announcer are voiced by Charles Martinet, a man who later earned celebrity status as the voice of Mario. ‘Super Punch Out!!’ was actually the first game released to feature his vocal talents, and once you know who is behind the shrieks and cries it’s hard not to picture Nintendo’s most famous plumber. In the NES ‘Punch Out!!’ Mario may have been a referee, but with the opponent’s voice being a signal for their next move (and with this being such a integral part of the game) in ‘Super Punch Out!!’ ironically his voice rather than presence is now far more significant. 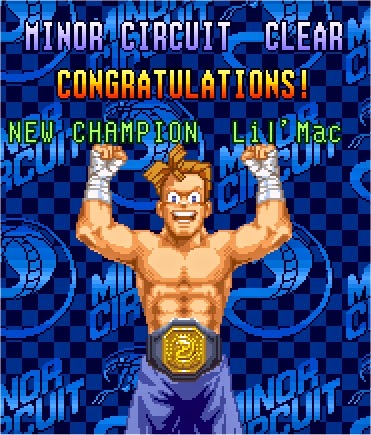 The timing for release of ‘Super Punch Out!!’ did it no favours at all. Released for the Super NES in November 1994 it hit the shops just a week before a little title known as ‘Donkey Kong Country’. Consequently it was totally overlooked by Super Nintendo owners upon its release as the monkey hype train meant any other game released that Christmas was drowned out. This is a real shame as while the game may still look fantastic and play incredibly well back in 1994 it must have been stunning certainly on par with ‘Donkey Kong Country’( even though it was of course less revolutionary). 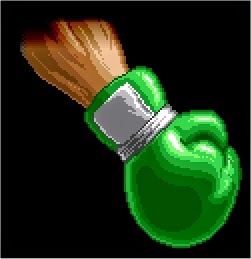 It may not really resemble boxing and may be brutally hard at the end, but ‘Super Punch Out!!’ really does feel refreshingly different when compared to every other fighting game on the SNES. It may be frustrating at times but every victory is thrilling and each new opponent is entertaining making the game amusing yet also addictive. As Super Play once said “everything is played for laughs and simulated pugilism doesn’t come any more entertaining than this”. Though the world may have been throwing dragon punches and kicking like a spinning bird, they should have given a little thought to ‘Super Punch Out!!’ too. It may be less demanding on the fingers, but it certainly is more of a work out for the brain.

Where did I get this from.
This game is another I never would have picked up were it not included in a bundle. Like everyone playing games in 1994, when ‘Donkey Kong Country’ was released I looked at no other game. Even if I knew of it though, I doubt I would have given it any time when ‘Street Fighter 2’ was to hand. This is probably for the best as without patience and attention you can’t get very far in ‘Super Punch Out!!’ and I certainly got more out of the game now than I ever would have before. As part of the bundle I got this game in mint condition for a little under £9 which is quite the bargain. Its limited success commercially means there are not many copies of ‘Super Punch Out!!’ floating around on eBay so when a nice condition copy comes up people seem to be happy to pay. I would certainly recommend it, even if you traditionally shy away from fighting games.