The 16bit era was awash with platformers, but is 'Chuck Rock 2: Son of Chuck' a sequel or a rehash?

With few exceptions film sequels are known to be inferior. Popular musicians often talk about their struggle to measure up to a popular debut with their "difficult second album". However the video game medium seems to buck the trend. Typically the debut entry in a series is a starting point which subsequent games build on. As technology advances and developers get more accustomed to using it, the quality of the games we play increases. When creating a sequel to a popular game often the mechanics of the prequel get refined and improved. Development time is spent on optimising what has come before rather than starting from scratch. The developer also had the advantage of knowing what the audience and critics liked in a previous game; which game play devices worked and which infuriated. A follow up can therefore be skewed towards the prequel’s strengths making, in theory at least, a stronger game.

For a sequel to exist of course what had come before must have enjoyed some success; be it critically or commercially. Few publishers are going to be willing to fund the continuation of a series that no one liked or bought. This is why I was so surprised to see that a sequel to 'Chuck Rock' existed. Amiga magazine The One claim coding on the sequel started in late 1991 with a game concept in place before the first 'Chuck Rock' game was even finished. While the first game wasn't bad it also wasn't very good. While it did present a few intriguing Rock based puzzles, the novelty of this wore off quickly when they were endlessly repeated. It's hard to ignore the mediocrity of the game or indeed forgive its underlying misogamy. It seems that my indifferent feelings to the game were not shared by customers at the time however. Clearly enough people bought it to warrant production to start immediately on its pre-planned sequel.


In the first game, caveman Chuck saved his wife Ophelia from the villainous Gary Gritter. You may recall that the uncensored version of the ending saw Ophelia promise nights of passion to thank her heroic husband. Clearly she's been true to her word as now they have a baby; the eponymous Son of Chuck. With growing responsibilities Chuck has become more entrepreneurial and customers are queuing up to buy the Rock-et cars he incredibly builds by hitting rocks with hammers. Envious of the success he is enjoying with Chuck's Motors, rival firm DatStone kidnap Chuck. Owner of this rival firm, Brick Jagger, will only release Chuck if the deeds to his company are passed over. 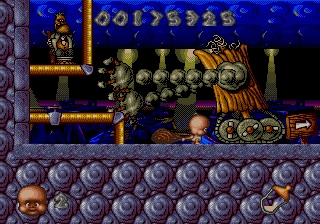 Thankfully the heroic gene obviously runs in the family, so Chuck Jr. sets out tspoo save his father. So begins an adventure that takes the player through numerous side scrolling platform filled levels that are crowded with dinosaurs and quite frankly awful puns.

Since he is a baby, Chuck Jr. isn't strong enough to carry rocks but he does carry a club which is largely used in the same way. Not only does it kill enemies but it is also used to move rocks a short distance and clear scenery; allowing progression through the game. "That sounds just like 'Chuck Rock'" notes Mark Winstanley reviewing the Amiga version of 'Chuck Rock II'. "In fact that sounds suspiciously like any one of the hundreds of cute scrolling platform games that have flooded the games market limiting the choice for us ". It was an observation that game reviewer Amanda Dyson also noticed. "'Chuck 2' follows an extremely similar path to the original. Lots of levels of mostly scrolling platformy action with lots of cartoon-type baddies to clobber". Winstanley adds that it is "a worthy successor to 'Chuck Rock' but not really that different [...] it’s all very much 'Chuck Rock' with knobs on".

The knobs of which Winstanley speaks is most probably the visuals as they are significantly better than the original game.  "Graphically 'SoC' excels" he wrote in his review. "Junior is a miniature comic masterpiece with goodness knows how many frames of anivmation. He wobbles along as he drags his club, balances on the club to avoid ground attacks and throws a real tantrum every time he loses a life, complete with tears and ground beating". 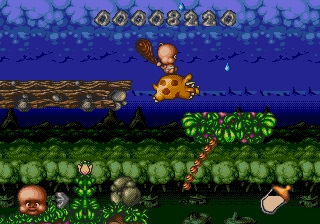 There feels like dozens of layers of parallax scrolling going on behind this charming main character sprites which gives the game impressive visual depth. There's far more variety of level locales too, and you see Junior scaling a tree that's slowly sinking into fire and venturing through never popular slippy slidey ice worlds. 'Chuck Rock 2' is also filled with quite a lot of subtle flourishes that just improve the overall look. From a hazy shimming background during the Lively Lava stage, to busy foregrounds seen in the butterfly grove section.

The bosses are particularly impressive, mainly because they're huge. Most fill a couple of screens and one level is actually spent entirely on the back of a boss; something you only realise when you reach the head end. Developer Core Design proclaimed these bosses to be "the biggest ever in a computer game" at that time.  Artist Lee Pullen and designer Bob Churchill achieved the epic scale by rather ingeniously repeating round circular sprites which collectively create mass while moving individually, as a result 'Chuck Rock 2' has a look that's similar to 'Vector Man'. 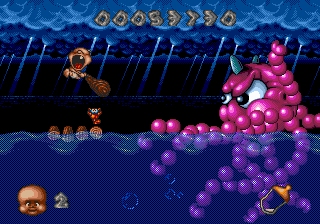 It’s a rather stylish and attractive end result. "The bosses are the most impressive I've ever seen" Dyson claimed in her review. "The bosses in 'Chuck [Rock] 1' were very big and pretty but they were basically just large sprites with minimal animation that glided and twitched in a not particularly special manner. In 'Chuck [Rock] 2' they really seem alive - different bits of their bodies move at different times and more or less the entire bodies are animated in some way."

The audio is also far better than that found in the original game. According to the credits the music was composed by Martin Iveson and Nathan McCree; although it was predominantly McCree who created the melodies heard by console players. "We both worked on 'Chuck Rock 2' McCree tells the Maximum Power Up Podcast.”[Iveson] did the Amiga version and I did the Mega Drive version, so quite often we would work in tandem like this. He was enjoying himself as was I; we were both doing what we loved to do."  According to McCree, at the time composers had to write their game music in less than three weeks and they also had very little direction. "I was never told to do anything at Core Design. It was a case of "Nathan we need some music for a game, this is what it is, off you go!" It was totally up to me and Martin as well. We had total free reign on everything, it was a real luxury." Renowned Mega Drive composer Matt Furniss was often called on to port Mega Drive music to the Master System." If I liked the original music, I’d convert it faithfully. Some examples would be 'Chuck Rock II' 'Leander', 'Mr Nuts'" he admits. "If the music wasn’t that great - I’d compose new music better suited to Sega’s audio hardware". It's hard to imagine a better audio endorsement.

To say 'Son of Chuck' plays entirely the same as its predecessor would be unfair. While it's very similar there are additional game play ideas in 'Chuck Rock 2', even if they themselves are hardly original. Like the apes of ‘Donkey Kong Country', Junior  can ride on the backs of animals including an ostrich, a turtle and a goat. 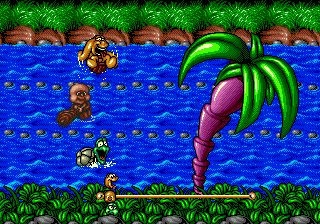 There are also various mini games between levels which are far better than the typical fare that pads out 16bit games. "Usually these are pretty second rate affairs that seem to have been added because there was some space on the disk" said Amiga Power, reviewing the identical home computer version of 'Chuck Rock 2'. "These [mini games] are actually quite good. Not good enough to stand on their own, that would be too much to expect, but they perform the task required of them - to provide a bit more variety."  Other level specific quirks have been done dozens of times in other games, but at least in 'Chuck Rock 2' they also break up the monotony of walking from the right of the screen to the left.
The Spooky Cave level for example limits the player’s view to a spot light around Jr.'s illuminated club. "By their nature, platform games tend to be a bit samey" claimed Winstanley. "But, there's enough little touches in this to make you laugh [...] a big thumbs up".

It's an enjoyable game to play while it lasts, although 'Chuck Rock 2' takes little more than an hour to complete on repeated plays. That's even factoring in the additional levels that only exist in the Mega Drive version, although according to some critics these added little to the game. Swedish magazine Sega Force even felt the 8-bit version of 'Chuck Rock 2' were superior for not offering the Mega Drive's "filler material". In a preview article Core Design claimed the game was "twice the size of the first game and a hundred times more exciting". However according to Amiga Power "all this adds up to is about 16 levels which doesn't sound that many compared to games with hundreds of screens."

'Chuck Rock' was a decidedly average game and while 'Chuck Rock 2' plays faster, looks nicer and has better music it really doesn't do enough. Some critics felt equally underwhelmed." This is an update rather than a real sequel" suggested Amanda Dyson in Amiga Format. "Players of the first game might well feel they'd be just as well getting out the original and playing it with a sheet of psychedelic coloured cellophane over the screen to give the graphics a new look. The main market for the game is going to be those who bought the first one. And if you liked that, this is, in almost every way a tangible improvement." 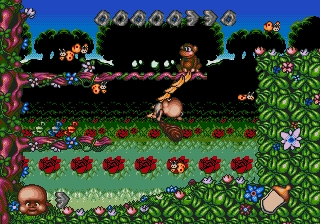 I wonder if the fans who justified the creation of this sequel were satisfied. Although the characters appeared in 'BC racers' the main series ended with 'Chuck Rock 2'. This suggests any success the first game enjoyed was eroded by its marginally better sequel.
Based on the second game improving on the first, 'Chuck Rock 3' may well have been the best in the series, but even then it’s doubtful it would have reached the lofty heights of the majority of Nintendo’s platformers. Core Design went on to produce half a dozen 'Tomb Raider' games so the developer wasn't shy about revisiting past success. At least this series deserved sequels. 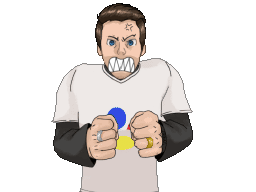 Where did I get this game from?
Like 'Chuck Rock' I got this game in a bulk buy bundle but unlike its prequel I was surprised to see the name on the cover. I had no idea the first game had a sequel. Of the two it's this game I would return to, but it's doubtful I ever will prioritise it over a hundred better platformers.