I'm sure every Retro Gamer has been told at some point that they are "addicted" to games. That could be in relation to the time they spend playing games, or it could also be prompted by the amount they spend buying them . Like all hobbies, an enthusiastic interest in Retro Gaming inevitably demands a financial and time investment. The more you spend the bigger the collection, the more time you give the longer you get to play. But, while most of us can confidently say that we are not "addicted", there are some who struggle to stop buying and can't put the controller down. Too many find it too easy to dismiss this as being ridiculous. However, those who laugh at the addiction admissions have probably never gone to bed late just so they can "beat that last boss". They probably haven't spent next month's wages on a rare Jaguar title, just because it "isn't listed very often on eBay". When you step back and look at your own approach to Retro gaming you start to realise just how many "signs of addiction" you exhibit. This is why it's important to speak openly and honestly about a sensitive topic. It's vital we understand what is healthy and what is a reason to be concerned .

After looking at scientific and social research, I have put finger to keyboard and written quite exhaustively about this very subject for RetroCollect. I spoke to former addicts (of both gaming and to other substances) to make sure the topic was handled with the care it deserved. What was most eye opening was the extent to which some people goto to build a collection. Ultimately what I learnt was that Retro Gaming and collecting is a fantastic hobby, but only when it is moderated. Evidently, excess and impatience seems to lead to ruin for most.I'll admit that i was very anxious about the site publishing what could be a very sensitive  topic. I don't pretend to be an authority on this subject, so really hoped the points I made were suitably backed up by those with the experience to do so. I've been wowed by the response. Never has an article I've written garnered such a reaction, with it reaching far into the community to the point that the GameSpot Twitter account even shared it. But more importantly, I've been privately contacted by several people who said the piece spoke to them and made them feel better about their own collections. I've been thanked for my sensitivity and objectivity which has made all the research and effort worthwhile.

With this in mind if you (ironically) wish to explore some of the emotions discussed in the article through a game please do dig out 'Actual Sunlight'. 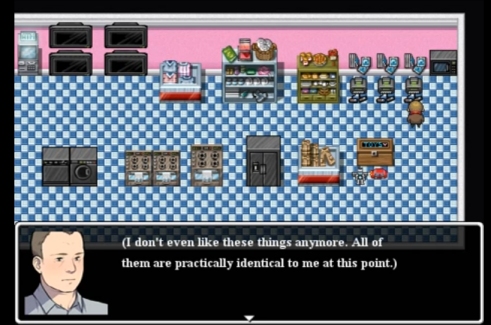 It's a short title that tells the story of Evan Winter, a 30-something man, living in Toronto. The game examines the monotonous life of this socially trapped but affluent individual, single and hurtling towards middle age in a thankless job. It's a autobiographical game by Will O'Neill and Retro collecting and addictive spending features in the tragic tale. "A lot of what I wanted to write about was video games and having your life revolve around them" O'Neill once told Vice.com. It's "a game that criticises games and gaming culture [and] releasing 'Actual Sunlight' has only made me double-down on my engagement with that culture. All of a sudden I'm not just a loser addicted to games. I'm a game developer with something to say."

With its discussion of depression, gaming addiction and isolation it's undeniably a painful play. However it's one we should all spend half an hour doing. " I want everyone to play my game, and I don't think the writing that I do is inaccessible," O'Neill explains. "I think the vast majority of people, certainly the people you think of as stereotypical 'gamerdudebro' types, they could get a lot out of 'Actual Sunlight'. Whenever I see a review on Steam that's like, 'I don't know what the f**k this game's talking about,' they've got something like 7,000 products registered to their account. They know what this game is about – they know exactly what it's about".

I hope my article on Retro Collect at least makes the same "gamerdudebros" step back and take stock of their 7,000 games. There's an exciting world out there. it's would be a shame if we never get to see it because we have spent all our money and time replacing it with the pixelated version that exists in the games we enjoy so much.