Every 16bit console has more platform games than anyone could ever play in a lifetime, but this was one I wish I had known about in my youth! 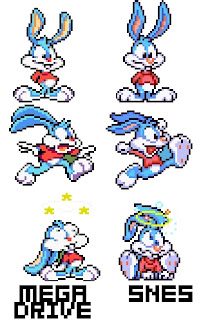 Expectations are always hard to meet but this is especially true when they're coloured by nostalgia. Our brain has a habit of remembering the good so flaws are frequently forgotten. We distort the memory so it is always going to disappointing when the truth is once again exposed. While this is depressing for a retro gamer revisiting the favourite games of their past, what's perhaps worse is when a game is as good as we remember but muscle memory prevents us from enjoying it. A favourite game is likely one we played a lot in our youth and as a result we know all its nuances. We remember the shortcuts, the cheat codes and how to waltz past bosses with ease. Childhood familiarity means that a game is easy to beat even if we want to saviour the experience as an adult. This was the problem I had with the Snes game 'Tiny Toon Adventures:  Buster Busts Loose'. I remember loving this game as a child but when I replayed it a few years back the game posed little challenge (except for one infuriating stage). I longed for there to be more levels to challenge me, new experiences to be had, but within a few hours I had beaten the game on its hardest setting. Fortunately for me, extending the experience is possible but I'd have to turn to the Mega Drive. Even better, the Sega based 'Tiny Toons' game is much less varied. While this may sound a short coming the Snes 'Tiny Toons' game was a rather hit and miss affair. Though that game was a platformer it also ventured into other waters with largely unsatisfying results. There's one stage that plays like American football and a range of mini games that are predominantly unremarkable. The straight forward platforming sections and the boss fights are where 'Buster Busts Loose' really shines and thankfully this is the type of game play that can be found in 'Buster’s Hidden Treasure'.

Both games are of course based on a Warner Brother's animated series that was very popular for a few years in the nineties. Although originally aimed at children, it was a series known for its irreverent humour and as a result it still makes fun viewing for adults today. The games feature the same characters and humour as the TV series and the plot is also equally ridiculous. The series' main protagonist is Buster Bunny, a distant relation to Bugs. In 'Buster's Hidden Treasure' he has found a map while cleaning out the attic of the Acme Looniversity. Envious of his friend’s chance of wealth, series antagonist Montana Max steals the map and then, inexplicable hires Dr. Gene Splicer. 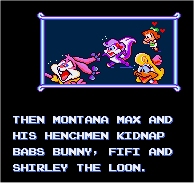 This deranged mad scientist stereotype then brainwashes several of Buster's friends and kidnaps the remainder, including Babs Bunny. The games developer Konami have clearly taken the source material as a starting point since this plot is unique to 'Buster’s Hidden Treasure'. It's a story told though badly translated text at the start of the game where attractive pictures don't quite marry with the text shown below. It is rather sad that Babs has been reduced to little more than a damsel in distress. The Tiny Toons series was known for showing its female characters as being just as (if it more) able than their male contemporaries.

While 'Buster’s Hidden Treasure's plot hasn't been entirely true to the TV series it's hard to ignore just how much the game has borrowed from other sources. The most obvious source of inspiration is ' Sonic the Hedgehog' and not just because that game also features a fast blue protagonist trying to stop a mad scientist. "The programmers have taken the best elements of 'Sonic' added a splash of 'Mario World' and come up with an absolute cocker of a platformer" claimed review Mat Yeo. Speed is the focus of  'Buster’s Hidden Treasure' and Buster races through environments that'll be very familiar to anyone who has played With Sega's mascot. However the game at times doesn't seem to be designed for the pace the main character moves. 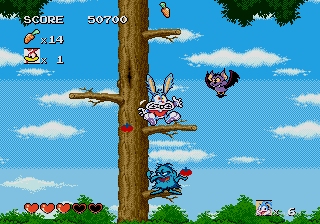 While there may be ramps and springs to accelerate Buster there are also some very precise ‘Mario’ style jumping sections. These parts prove to be excessively tricky primarily because the game's avatar seems to always want to break into a sprint. If Buster takes more than a few steps in any direction he will stay running even if you would prefer him to move cautiously. I found I actually had to tap the direction pad at times to avoid moving quickly, which hardly seemed very elegant. However at speed Buster is at his most deadly since he has the ability to slide into enemies killing them en-mass. Of course the tried and tested "jump on heads, kill off baddies" technique also exists in this game. However the hit detection can be a little imprecise; something that's pretty poor considering it's such a staple of the genre. Like so many platform games our hero is also able to bounce off walls, primarily to reach hidden sections and the power ups contained within them. Buster initially has three hearts which are lost following collisions with enemies. However by finding bells scattered over the levels this can be pushed to five. Alternatively finding a crystal will make you invincible for a short period of time, rather like a star in  'Super Mario World'. However while the carrots that litter 'Buster’s Hidden Treasure' do resemble Mario's coins collecting them doesn't give you an extra life. Instead if Buster collects fifty he can call on help from Concord Condor, Little Beeper, or Lil' Sneezer. These characters from the TV show act like a smart bombs killing all onscreen enemies except bosses.

To complete each level, Buster must simply find the character Gogo Dodo. He has the ability to open portals which lead to the next stage and there are more than thirty stages in the game; a significantly more than the eight offered in the Snes' equivalent game. There are multiple exists in the game and while most lead onto the next stage the harder to find rainbow portals lead to the Wackyland bonus stage. True to the genre after every few levels the player must battle a boss which is usually a friend who has been brainwashed. 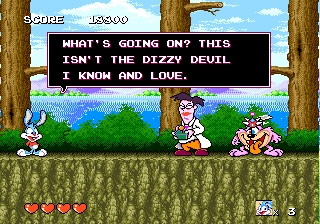 Unwilling to attack his school chums the only way Buster can free them of the mind control, is by jumping on the head of their manipulator. Everything in 'Buster’s Hidden Treasure' has really been seen before and there were many similar games to pick from on the console. "Platform games are a dime a dozen on the MD' Mat Yeo noticed. While ' Buster’s Hidden Treasure' may not radically shake up the tried and tested platforming genre that doesn't mean the game isn't worth your time. Mean Machines magazine even called it "one of the best examples of the platform game on the Mega Drive and certainly the finest example of the machine's abilities".


'Buster’s Hidden Treasure' is certainly a very lavish production. The back of the box claims the experience is like "playing the cartoon" and there is some truth in this. "The cartoony feel has been captured superbly" agreed reviewer Adrian Pitt at the time. "The graphics are excellent. The sprite animation fantastic. Watch Buster carry out a whole host of moves and tasks many of them extremely humorous [...] A cutesy platform game that's been beautifully produced. It looks stunning." 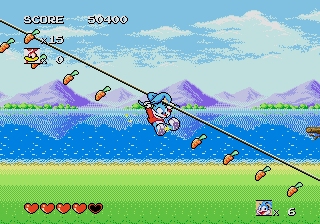 For me the most impressive thing visually is the backgrounds, which somehow don't seem to be limited to the 64 colours on-screen like other Mega Drive games. It seems every one of the machines' 512 available hues appear at one point or another with some impressive graphical overlays only adding to the beauty of the backgrounds. Obviously from a gameplay point of view it would be preferable not to be playing underwater or slippery slidey ice worlds but if game developers must insist on including stages that play poorly at least they looks nice while you're playing. 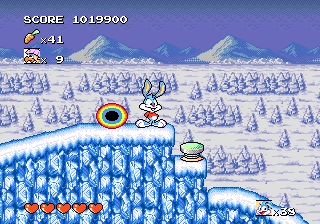 The music also seems to exceed what the Mega Drive is known to be capable of. Starting with the immediately recognisable cartoon theme tune everything that can be heard in this game is of a high standard. Admittedly the best music is taken directly from the animated series but what's exclusive to the game is complimentary to it, including echoes of the main them whenever possible. At times the styles seem slightly obvious with the spooky stages sounding exactly as you'd imagine but (as the gameplay proves) repeating what has worked in other games isn't necessarily a problem as long as you do it well.


This ultimately is why it's so easy to recommend 'Buster’s Hidden Treasure'. While it may not do anything revolutionary its overall level of quality means this is easy to forgive. Many of the team who made this game went on to produce the incredibly attractive 'Rainbow Bell Adventures' another platform game that's intended to be played at speed. In this game they have ironed out the kinks seen in 'Buster’s Hidden Treasure' with stages that embrace the fact the player is forced to go quickly. But this slight gameplay misstep is hardly a reason not to play the game. To do so would mean missing out on a very enjoyable game that doesn't outstay its welcome, despite being comparatively longer than most platformers. 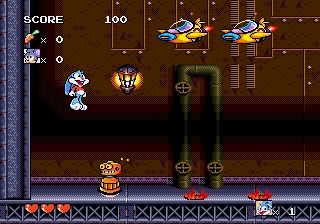 I almost feel sorry for my younger self since he didn’t get to play this game. It really does offer the best bits of 'Buster Busts Loose' and spreads these over a much longer game. While the Snes game may be more imaginative with better individual moments, this Mega Drive game is far more consistent. It remaining on the whole fun from the moment you press start to the games credits. If I had both as a child I probably would have played this more.

So while expectations built on nostalgia are often unrealistically high, they can also enhance the joy you feel when a game you'd dismissed (or never heard of) actually deserves to be added to your favourites list. 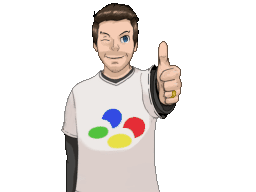 Where did I get this game from?
Back in August 2015 I was invited along to Play Margate, to review the event for Retro Collect.  I picked 'Buster's Hidden Treasure' up here for a bargain price of £9.