'Lufia II: Rise of the Sinistrals' is a RPG overlooked by many but adored by few. But is it worth playing a 30 hour game just because the ending is so memorable?
Developed by Neverland
Published by Nintendo /Natsume
Released in 1996

Like Link hearing Zelda's voice as he wakes or Chrono's premonitions, every few months I hear the call to adventure. While I like to enjoy a wide variety of genres, RPGs are the games that I naturally gravitate towards. It seems I can't go a few months without feeling the need to play one, which is bad news for my wallet as the best 16bit RPGs seem to hold their value and are getting increasingly expensive over time. When you look at lists of the most expensive Snes titles, most of the premium prices titles are Role Playing games. Tellingly these same games also regular appear in "best of the Snes" lists too, so quality it seems comes at a price.

RPGs are popular because try offer escapism, a chance to be a hero in a new World. My best gaming experiences tend to be when I get lost in a story absorbed in atmosphere and embraced by engaging characters. To do this best, I think, you need a RPG.  So while I may have many unfinished platforming and action games on my shelf, it was 'Lufia II' that has recently hogged dozens of hours of my available gaming time . It was a RPG I hadn't heard of prior to getting it last Christmas from a friend. To be frank, that's something I should be ashamed to admit.  While it isn't ever going to top 'Chrono Trigger', 'SeikenDensetsu 3' or 'Final Fantasy VI' it is a game that anyone with even a passing interest in Role Playing Games should look into.  It's gameplay will be instantly familiar and it's graphics are best described as "inoffensively functional" but the ending of 'Lufia II' is incredibly moving and worth the price of admission by itself. 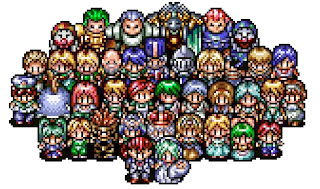 It's often argued that it's not the final destination by the journey which is the reward; that really isn't the case in 'Lufia II'. Apart from some incredibly intelligent and challenging puzzles there is very little here that isn't done in other games and often better. However, when the credits roll you'll have to have a heart of stone to not be weeping. As you wipe away those tears hopefully, like me, you'll realise the effort to get there was worth it.

There is a short cut to seeing the dramatic conclusion of 'Lufia II'; play its prequel 'Lufia'. Perhaps uniquely, the game released first actually ruins the end of its own sequel: the second in the series is actually a prequel. Needless to say, without the 30 hour investment in characters though, when you see the events of 'Lufia II' at the start of 'Lufia' there is little emotional resonance. So, while I appreciate that it's quite an ask for someone to play a long game just because it has an emotive end, (especially when the narrative only gains momentum a third of the way through) any RPG fan would be missing out not to see this game to its conclusion.


I have actually written thousands of words on the history and mechanics of 'Lufia II' which can be read, on real paper, in the popular 'Hyper Play RPG' fanzine. So, if you are intrigued by the game it may be worth picking the review up.

To whet your appetite here's a little snippet.

‘Lufia II’ is in essence a "best of" compilation; it plays well because its game mechanics are, for the most part, borrowed from other games and subtly improved. You don't have to spend ages grinding to learn magic spells you can simply buy them in shops, similar to early 'Final Fantasy' games. Churches are used to remove afflictions similar to the 'Dragon Quest' series. Like 'Breath of Fire', you can heal in Inns, but the most obvious Influence has been 'The Legend of Zelda: A Link to the Past'. While 'Lufia II' is, of course, a turn based game there is still a great deal of exploring. Each new dungeon is littered with puzzles which start simple but by the game’s close become real head scratchers.  Some of the more fiendish puzzles fortunately aren't required to be solved to complete the game but a solution offers more powerful weapons and armour though. Often I would finish a dungeon, only to spend an hour or so going back through competed rooms looking for secret passages and ways to reach the one treasure chest I'd not opened.  Critic Jason Schreier was clearly a fan of the puzzle distraction. "The more I think about it, the more I’m convinced 'Lufia II' has the best puzzles in JRPG history" he wrote for Kotaku . "Instead of just throwing mazes and monsters at you, dungeons in 'Lufia II' challenge you to think about what you're doing, where you're going, and even how many steps you're taking. Some of the puzzles are obvious—put this jar on a button—but as you progress through the game, they get increasingly difficult. I wonder why more RPGs haven't given their dungeons the type of elegance and intelligence that 'Lufia II' had."