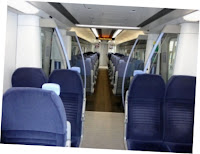 Getting stuck on a train is a frustrating experience. Sat stationary for two hours while the batteries on your electrical devices slowly ebb away. Looking out of the window has limited appeal; when you're on a stationary train it never changes.  Of course I could perform the social faux pas of talking to the fellow travelers trapped around me, but sharing my oxygen for two claustrophobic hours had left them in less than chatty moods. Ironically though, talking is what I wanted to do most at that particular time, just not with the people around me. In a cruel twist of fate, the day my daily commute was severely delayed was also the very day I was due to record a guest appearance on the 'Maximum PowerUp Podcast'.

I have known one of the hosts Paul for a long time, though only through Twitter - we hadn't actually met or spoken. In fact I became aware of him due to a long running joke on the (now dead) 'RetroGrade' podcast, a show I had twice been on. Paul and I share a passion for Super Nintendo and  Super Play, indeed he is trying to buy every game in the magazine's "100 Greatest Snes games of all time" feature. I think I may have made this mission slightly harder (and a lot more expensive) by encouraging him to buy them all boxed and complete. For sometime we have talked about recording an episode of the 'Maximum Power Up' podcast together and initially I thought it was going to be about memories of the Super Nintendo; a companion piece for his other episodes on the Mega Drive. While we are still due to do this episode at some point, I was surprised and delighted when he said we would first be recording an episode about one of my favourite genres; RPGs . To make this delicious metaphorical podcast cake even more appealing, joining us would be Kincl, the editor of the 'Hyper Play RPG' fanzine, a publication I've written for a few times. Finishing the party was Chris Smith one of the shows regular co-hosts, known for his hilarity, strong opinions and lists.

I was ridiculously excited about the recording, which made my imprisonment on a static train all the more frustrating.

Thankfully, although I missed the first section of the recording I was able to jump in for the majority, and I've heard that my late arrival gave the episode a second wind, so hurrah for happy accidents.  While I had been on several podcasts before (including the somewhat intimidating 'Most Popular Girls on the Internet') I typically just chat about myself. Never have I been asked to talk about a specific topic for fans who will know the subject better than I . To avoid making embarrassing mistakes, I stuck to my narrow area of expertise; the 16bit genre, admitting when I didn't know a game rather than trying to pretend I had a broader knowledge base. I think, despite being very nervous, I only made one mistake - while I meant  'Final Fantasy : Crisis Core' I actually said 'Final Fantasy  : Lightening Returns', oh the humanity!

I really enjoyed the recording and I've been told that came across. I didn't realise that others don't share my insatiable love for 'Ni No Kuni' and I was beyond shocked that everyone doesn't  think 'Final Fantasy VI' is the best one !

There's already been talk of doing a follow up episode so please do give feedback if you have some.