This may be one of the first Japanese made RPGs for the Mega Drive, but with tedious monotonous gameplay it may be one to avoid no matter how good the art is.
Developed by
Sonic! Software Planning (Camelot)
Published by Sega
Released in 1991
It’s difficult to think of many games whose name reflects my experience more accurately than ‘Shining in the Darkness’, or to be more specific, the Japanese name for the same game: ‘Shining and The Darkness’.
It’s a game that includes elements I absolutely love, while simultaneously forcing game mechanics on me that I despise. ‘Shining in the Darkness’ somehow manages to simultaneously be my idea of retro gaming heaven and hell. While there are things that shine, there’s an equal amount of darkness and it’s hard to know if the good parts deserve the struggle through the bad bits.

Diluted down to its main gameplay, ‘Shining in the Darkness’ is really just a somewhat generic first-person dungeon-crawler. The game was developed by the Takahashi brothers at Camelot, then known as Sonic! Software Planning. However the ambitious game was too big a project for a small development team, so help was sought from Climax Entertainment, who would later go on to develop the ‘Land Stalker’ games. 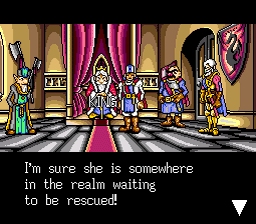 Set in The Kingdom of Thornwood, everything is seen through the eyes of a mute protagonist with a user-defined name. An evil sorcerer Dark Sol has kidnapped Princess Jessa and our hero believes that if he rescues her, he will also find his lost father since he was with her at the time of her abduction. Rescuing a princess is never an easy task of course and the protagonist must enter a Labyrinth and face the four Trials of the Ancients.  Thankfully he is only alone in his quest for the opening couple of hours.  After beating the first boss, Kaiserkrab, the game’s party size expands. Pyra Myst, a feisty powerful elf mage and a hobbit trainee priest called Milo Brax join the party. Throughout the adventure, several other characters join and leave, each with a variety of skills and strength.
Although somewhat crude and simplistic compared to many modern JRPGs, weapons and equipment must be distributed amongst the party bought with gold found by defeating foes. As per the traditions of the genre, Party Stats also increase as experience points are earned during battle.
Much was made of ‘Shining in the Darkness’ upon release, with Mega Drive magazines excited that a game like this has found its way to the console. However, while it may have been one of the first RPGs to grace Sega’s 16bit machine, ‘Shining in the Darkness’ wasn't exactly original and borrowed heavily from other adventure games. Producer Hiroyuki Takahashi cites ‘Wizardry’ and ‘Dungeon Master’ as influences, although echoes of ‘Phantasy Star’ and ‘Dragon Quest’ are also obvious. 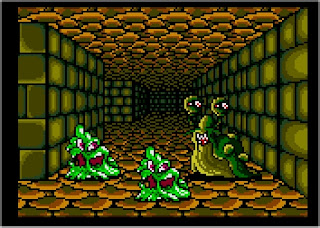 Battles take place exclusively in the Labyrinth; a place that the game claims was created as a training ground for knights. Clearly, it’s also a great place for a villain to take a captured damsel as it’s filled with traps and monsters. Calling it a Labyrinth is certainly apt as although it’s built on a grid with exclusively right-angled corners it’s very easy to lose your bearings, especially as each floor has identical floors and walls. “This is a first-person, turn-based hack through some of the most fiendish labyrinths ever to grace the Sega Genesis, and it's a test of both perseverance and patience,” said GameSpot in a retrospective review. Success will depend on you drawing a map on graph paper, since you don’t have access to an in-game equivalent until Pyra Myst learns a spell called “view”.  This should happen during the third section of the labyrinth, about five hours into the game!
Sadly getting continually lost in identical looking corridors isn’t the only frustration in ‘Shining in the Darkness’. Battles in the game are entirely unavoidable and far too frequent. “Every other step results in a random battle. Grinding becomes unavoidable in corridors that seem interminable” wrote a disgruntled critic. “Every turn leads to another hallway full of enemies.” 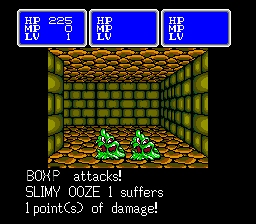 The icon controlled battles themselves are simple affairs, a choice between attacking, using an item, using a spell or running away. There’s little point running away as you’ll fail most times resulting in a missed turn. So the extent of the gameplay is deciding if you’ll use a spell or a weapon and hoping you’ll reduce the enemy’s health to zero before they do the same to you. As each character has obvious strengths you won’t change what they do each turn, so the end result is Battles that feel drawn out and monotonous. Admittedly you do meet a huge variety of enemies, some of which are truly bizarre, but that does little to detract from how repetitive things get. “The first-person pseudo-3D exploration makes it look more interesting than it actually is” critic Dan Whitehead acknowledges in a retrospective EuroGamer article.  Frequently you’ll trade blows with enemies, barely win and then, in a weakened state, be forced into another battle moments later.  You know you’ll fail before you even start but you have no choice but to go through the motions. Thankfully the frequent inevitable deaths don’t end the game. If the entire team becomes paralyzed or dies in the Labyrinth, the game will continue in the Shrine. Evidently, upon death a kindly Valkyrie delivers the party’s remains there and, thankfully, a holy man there is able to bring anyone back to life. You get to keep the gold and experience earned but your progression in the labyrinth is reset. So when you re-enter the labyrinth, you'll have to fight your way back up to where you left off, including any of the lower-level monsters that might happen to be in your way. Even without looking at your hand drawn map you’ll know the start of the maze by heart since you’ll have had to pass through it countless times.
For most of the game, you feel like you’re simply grinding to get a level high enough to beat the next boss- it’s not a conscious choice. Exploration is continually interrupted by the far too frequent encounters and these last so long that you’ll lose track of where you were going and came from. You’ll gain all the levels you need in the game just trying to figure out where you’re meant to be going, as while objectives are explicitly stated what you need to do to complete them is left vague. 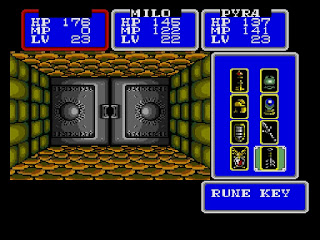 The puzzles in ‘Shining in the Darkness’ are completed more by luck than judgement. You’ll have to find hidden routes behind walls, which essentially means you have to perform a search at every dead-end corridor you come across. Further, into the game, The Orb of Truth will expose the fake walls, and special keys can open up different parts of the Labyrinth. However, this is poorly explained in the game and you may be stuck for hours before you realise. For Peter Tieryas, former Lucas Arts programmer and designer, it was a frustrating game to play as a child. “There were so many times I felt helpless when I was originally playing ‘Shining in the Darkness’” Tieryas wrote in Kotaku. “I was twelve then, so there weren’t any FAQs online I could consult. I searched every corner of the labyrinth, even though I had no idea where to go. I persisted, mainly because back then, I didn’t have anything else I could play- any game I bought was going to be it for the next year.” ‘Shining in the Darkness’ boasts thirty hour duration, but 28 hours will be spent doing essentially the same battle over and over again. 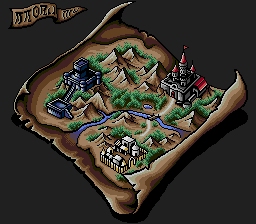 For me, the most enjoyable parts of the game can be found outside of the labyrinth. A world map presents three locations that can be visited; the labyrinth, a small village and a castle throne room. While the first is devoted to battles and levelling up, the others exist to tell the game’s story and the longer you spend in each the more you’ll understand of the world and its lore.
Locations are wide panoramas that scroll elegantly as you turn your protagonists head, and everywhere is filled with anime versions of traditional medieval archetypes. “When we were making ‘Shining in the Darkness’ other developers were blown away by it. They couldn’t believe that we were able to use such large graphics” Recalls Hiroyuki Takahashi. One critic noted the game offers “gorgeous JRPG art that made it feel like a fantasy anime come to life”. “The moment you slap ‘Shining in the Darkness’ into your Mega drive, you're in for a visual treat” adds Mean Machines magazine.
As a celebrated author Peter Tieryas is able to notice how ‘Shining in the Darkness’ includes elements of classic literature. “Similar to a drama, the story is split into comedy and tragedy. The throne room represents the more serious elements, with the king and his advisers debating the crisis wracking the Kingdom of Thornwood [...] The NPCs in town represent the comedic half, providing light-hearted conversations that add to the drama.”
In each location, dialogue changes after every major event or object discovery. 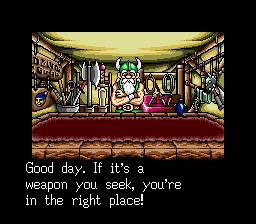 Drunkards will pass comment on your feats and share gossip with you at the tavern. The merchants are equally dynamic as their inventory grows and special items become available as you progress. Bizarrely the weapons shopkeeper looks identical to Gilius Thunderhead from ‘Golden Axe’, which is either coincidence or a subtle piece of cross-promotion.


“‘Shining in the Darkness’ is the most colourful, enchanting RPG I've played on the Mega Drive” claimed Sega Force magazine. By reacting to player achievements the world feels alive and immersive. It’s the attention to detail that draws you into the story and to some extent justifies the non-stop grind in the labyrinth. It’s an opinion shared by Kotaku. “While the main adventure follows many common JRPG conventions, it’s the character interactions and the way people respond to your actions that makes the game so interesting”.
Environments that felt alive were always the intention of producer Hiroyuki Takahashi. “I thought it would be exciting if the player could actually travel to a fantasy world and walk around, exploring old houses, dungeons and other places” he said to Games TM magazine.

‘Shining in the Darkness’ was developed on a shoestring budget but managed to be a pretty modest hit worldwide in spite of that. Sega was keen to continue the series in the same style but Sonic! Software Planning had to other ideas. Their sequel ‘Shining Force’ was a tactical RPG in the style of ‘Fire Emblem’. Overshadowing its dungeon crawling prequel, ‘Shining force’ was a huge critical and commercial success that spawned many sequels. It’s likely that fans of this series will look towards ‘Shining in the Darkness’ to see its origins.


There’s an intriguing story here for them to enjoy, including some character overlap with ‘Shining Force’. By the game’s conclusion, there are some surprising narrative twists and turns that you wouldn’t have expected from the somewhat generic premise. ‘Shining in the Darkness’ feels painfully dated. You can encounter battles as frequently as every step, and given that there's essentially no strategy involved in fighting most of them, the game quickly feels like a mindless chore. 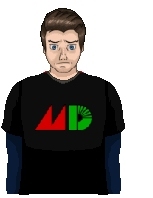 So while the story and graphics may shine, they’re lost amongst so much darkness it’s hard to recommend the game to any but the most ardent JRPG fans.
Where did I get this game?
A friend and I share a mutual love of JRPGs often playing through them together and discussing as we do. While I'm touched she gave me this, it'll probably remain on the shelf for the foreseeable future!
Posted by Julian Hill at 2/22/2019