It was a monumental challenge, it had no prize and it was set flippantly by a magazine. None of these factors seemed a problem to my brother when he announced one day that he was going to remake "Dr Robonik’s Mean Bean Machine" on the Amiga. While I read Total! and Super Play magazines as a child my elder sibling would pore through Amiga Power. Evidently the journalists for this magazine had fallen in love with the aforementioned MegaDrive puzzle game and said words to the effect of "we would pay good money for a version on the Amiga".

My brother had read this and taken it literally. There was a slight problem though, neither my brother nor I had played this 'Mean Bean' game, nor did we own a Mega Drive. These stumbling blocks should have been enough to stall the grand money making plan, but it just meant we had to at the net wider. Without the internet to aid our research I'm not sure how we found that the same game existed in several different forms on the Super Nintendo, only without the Sonic characters.  In the Japan it was a game called Super Puyo Puyo, in the US it was called Kirby's Avalanche and in the UK it was called Kirby's Ghost Trap; my beloved Super Play written about it. It was only a half page review with a handful of screenshots but for us it was enough information to make a convincing conversion.


When I say "us" I over-inflate my contribution. Without hyperbole my brother is a programming genius, whose skill seems to know no bounds. He sees lines of code in the same way that Neo sees the world of the Matrix - twisting and manipulating them like a master wizard till they creates the magic he desires. Even all there's years ago I'm convinced there was nothing he couldn't program with Amos given enough time. My role in our little bedroom games company was anything my brother couldn't do, which consisted of graphics and music. My results were passable rather than good as far as I could remember, but they served the purpose. It should be a breeze I remember thinking, it’s just a game about blobs falling down a screen but therein lay our next mistake - Super Puyo Puyo is a deceptively complex game. 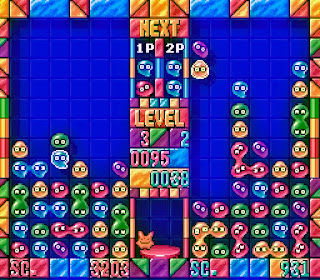 Using Tetris as a starting point, the game follows a similar logic. Four Beans fall into a play space in different formations. Line up one of these beans with one of the same colour that has already fallen and they stick together. Group four of them together and they pop, causing any beans above to fall into the spaces they previously occupied. Ideally then these falling beans will fuse with other local beans and in turn pop causing a chain reaction; an explosion of beans and a clearing of your play space. As we understood (from reading Super Play’s words and guessing from the pictures) the game was always played as a competition. Obviously as the relentless flow of beans fall into your play space they mount up and if left un-popped clog up your screen. When your screen is full of un-popped beans your opponent wins. It's a game style that is not dissimilar from many other games, and something my brother and his command of programming languages could recreate, on his own using just his brilliant mind (like I said he was and is exceptionally good at this!) The opponents you face in this race to destroy beans (with excessively expressive faces) depends entirely on the version you're playing. In the western versions you may play against Sonic's or Kirby's foes but by far the version of choice is the original Japanese release. 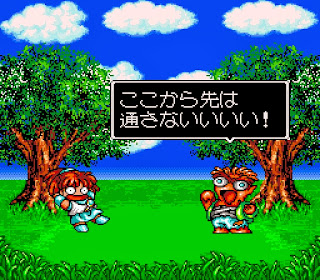 In this the character you play a female warrior called Arle and her star buddy Carbuncle (you see her in cut scenes between the stages). She faces off against the most random cast of characters imaginable. Starting against Rulue a blue haired female martial artist, Arle goes on to challenge an angry fish called Suketoudara, Seriri a paranoid mermaid (who can't make friends because she thinks everyone wants to eat her) and Skel-T, a green tea obsessed skeleton. It's hard to imagine a game challenge Parodius for all out bonkers-ness but Puyo Puyo certain gives it a go. The opponents though are more than just different character portraits; they play differently from one and other which adds massive variety to the game. Some will not rotate the bean pairs and while others will try elaborate methods to get as large a chain reaction as possible. These are the hardest opponents to face, as not only do they get rid of beans en-mass but they also hinder your play. The beauty of the chain reaction mechanic of the game is that as each consecutive set of four beans pops so does your "bubble total". These bubbles fall all at once into your opponent’s grid in addition to the normal beans and can only be removed by you popping a bean chain touching it. The genius of the games is that this bubble (‘Ojama’) punishment is magnified by each set of bubbles In the chain reaction: For example if you manage to pop a set of four yellows which then causes a set of green to pop, which allows for four reds to group together, which then cause 4 blues to cluster you will more than likely win. This is because your opponent won't have four bubbles to cope with (one for each set) they will have half a screens worth. This is where the game gets really fun. Do you play it safe and keep clearing sets of four, or do you go for the big chains knowing that if successful a well executed plan could lead to victory? In the one player game the AI's increased mastery of the chain reaction mean that each successive level poses an increased challenge adding variety to the game. But for two payers it’s the bubbles rather than the beans that keep you playing against one another.

The bubbles really were the undoing for my brother and I in our ambitious Amiga conversion - Jools' Baked Bean Machine (yes my generous brother named it after me dispute my massively reduced input!) Though we had seen the bubbles in screen shots and correctly guessed they were the result of an opponent popping a set of four beans we hadn't appreciated that they were linked with the chains. The feat of bubble popping excellence outlined above, in our game only gave your opponent four bubbles to cope with - hardly fitting reward for your forward planning and risk taking. There really was no incentive to get the chain reactions and with this oversight went a great deal of the game’s fun. I can't recall if we ever sent it off to Amiga Power or if they ever mentioned it in the magazine.

I look back at the making of video we made though with equal amounts of pride (as for all intents and purposes we replicated a game that a whole team had made) and embarrassment (at my high pitched voice and nineties shell suit!)

It was weird playing the game after all this time, and ironically I now know the finer mechanics of the game more than I ever did when we tried to remake it. I've played a huge amount on emulation with my (then girlfriend now) wife as it's a game that was suited to play on a PC keyboard. Now I have a Snes that can play Japanese games I can finally own a boxed version of the game that I had already devoted so much time to. Over the years the west has come to accept the name Puyo Puyo (though the second Puyo often becomes 'Pop') and the game has become welcomed on numerous consoles. For me though, this classic Super Famicom version is the version of choice. Not cluttered by gimmicks such as ‘fever mode’ the main principles of bean popping are front and centre. The sprites are a beautiful blend of adorable yet functional, with music that once heard can't be forgotten.

As I put it on for the first time my wife was as eager to play "Bean game" as I was and together we lost hours, caught up in the 'just one more go' nature of the game. We sung the lyrics we had made up together to fit the game's melodies, we laughed at the little star that dances in the middle of the screen for no apparent reason. She hadn't played for years but picking up the pad that day it was for her like no time had passed. It just goes to show that other games since may have copied the original, but they have never measured up. I can't be too critical of later version or conversions though. After all I know firsthand how hard it is to recreate as wonderful a game as this.

Where did I get this game?
Little tip for you. If you ever want to play a Puyo  Puyo game, there are much easier methods than making one yourself. To import games from Japan, I always check on sites like Solaris Japan as often they have a game in stock cheaper than the final price it goes for on eBay. The also have a few gadget that removes any worry of getting charged extra at customs, so they're worth a look. Sadly though, I didn’t use the millions of pounds given to us by Amiga Power for fulfilling their impulsive request. Maybe the cheque is still in the mail.
Posted by Julian Hill at 1/31/2014