The Mega Drive is well served when it comes to shooters, but 'Bio Hazard Battle' offers an experience unlike all the others.

Developed by SEGA Enterprises Ltd
Published by SEGA Inc.
Released in 1992
When I think of my favourite games there are some quite obvious common traits. I primarily play games which have strong stories since narrative development propels me to play on. I enjoy fair gameplay where failure comes from my shortcoming rather than flaws in the game. While I wouldn't want too many different gameplay styles within a game, a bit of variety is preferable. Finally I liked to be praised, I like my games to frequently reward me for doing well and avoid rubbing incompetence in my face. Role playing games clearly tick most of these boxes which is why I gravitate towards them. However, every now and then I have a desire to play their antithesis. Shoot ‘em up games offer little to no story. They're unashamedly hard with repetitive gameplay. Frequently you die through no fault of you own and after an hour of failing to get past the first level you realise just how terrible you are at playing games. So why does anyone play these games?

Admittedly, my knowledge of the shoot ‘em up genre is limited. While I've dabbled in the occasional space shooter like 'Thunder Force' for the most part, if I play a shooting game it's typically one that is excessively cute or quirky. However even with this narrow glimpse I can appreciate the thrill a player gets from mastering something where the odds are stacked against them. Yes you may fail repeatedly but every game over screen symbolises a lesson learnt. You keep playing hoping to get that little bit further on the next game, until, eventually the game's end is reached.

As IGN once noted "The two-dimensional side-scrolling shooter seemed to be an integral staple for action games in the early 1990s". This was certainly the case on the Mega Drive. The machine's faster processor lent its self to these sorts of games and it's the one genre that is always inferior on the Snes. On a system with many shooters ‘Bio Hazard Battle' stands apart from other more generic games owing to its usual focus on biology. Shying away from the Sci-fi themes of 'R-Type' and a world away from the ridiculous spectacle that is ‘Parodius’, 'Bio Hazard Battle' draws its inspiration from nature. 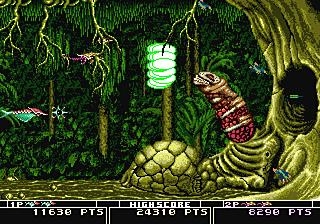 Populating the game are mutated version of recognisable animals and even the player's choice of ship is limited to things that look like they're held together by vine and bone as well as wire and bolt. "Think of it as David Cronenberg's 'R-Type' and you'll be within spitting distance of understanding what the flipping crikey is going on" EuroGamer once said.

The game takes place on the planet Avaron, where a biological warfare initially rendered it inhabitable for humans. The few remaining survivors of this war were stowed aboard the space station Odysseus. Hundreds of years later they wake from stasis to find their world has been reclaimed by nature. 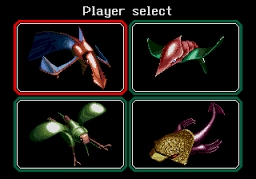 As the pilot of one of four bio-ships the player is responsible for finding a new home for the survivors, while destroying all biological contamination that you happen to come across. It's an original, if not particularly deep premise, but it is enough to serve the purpose in a shoot ‘em up. After all, this is a genre where you need only an excuse to blow away the thousands of enemies that stand in your way. Staying true to the narrative most stages take place in natural locations such as jungles, caves and even the ocean. Other stages see the player flying through the ruins of former cities and abandoned research facilities, twisted and deformed by the rampant vegetation. However, despite its unusual premise 'Bio Hazard Battle' still manages to include the staples fans of the genre have come to expect. There is the requisite battleship stage where the player has to take out a remnant bio weapon piece by piece. Although all organic in design, every stage introduces something new; typically an enemy or environmental gimmick.

Spectacle is largely top loaded though, with most of the more impressive backgrounds occurring in the first few stages. The rest of 'Bio Hazard Battle' seems to alternate between garish contrasting colours and largely grey environments. 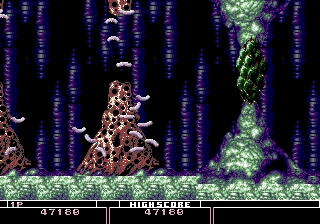 The enemies in the stages however, are consistently interesting and at times repulsive. They are "squishy and odd, undulating through the sky towards you in a freaky manner" agrees critic Simon Parkin. "You'll be up against some of the nastiest, most vile creatures you've ever seen. Things like mega amoebas, nuclear crabs, electro worms, and gut-grabbing insects" claimed Mean Machines magazine at the time. 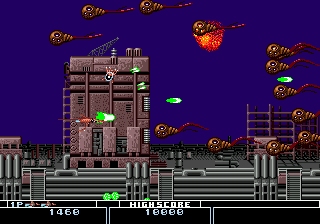 Sadly, much like he graphical flourishes, enemies are inconsistently dispersed through the game. At times there doesn't seem to be much to shoot and you'll find yourself circling the screen just to remain amused. Conversely there are times when too many foes fill the screen and the swarms cause the game to slow to a crawl.

Be it one enemy or waves they always seem to move to the beat of the music, appearing as if on cue. Indeed it is the bass heavy soundtrack that garnered the most critical attention at the time. The first stage theme is probably the most melodic but I like how each subsequent song either remixes it or adds a twist to it. The result is soundtrack that sounds cohesive albeit very unusual. There's a pulsing unsettling quality to it that works well with the organic visuals, deliberately distorted to sound like its being emitted by an underwater speaker. The music feels like an experimental album by an underground band, but that doesn't mean it's easy to listen to. The music that accompanies boss fights is particularly grating as it seems to be little more than a brash siren and gong duet. "The bass-heavy soundtrack adds to the rather uncomfortable mood" adds Simon Parkin. "Throbbing your speakers in such a way that your bowels give a little quiver as each new boss lumbers into view." Classic Games Room presenter Mark Bussler even suggested it was the soundtrack, rather than the story or gameplay, that made a player want to progress through 'Bio Hazard Battle'. "It has a rocking soundtrack. Turn up your subwoofer for this one and annoying your neighbours (three blocks away)" he jokes. "It's a good game but what you'll come away with is the music. It's your incentive for playing, to hear all that 'Bio Hazard battle' has to offer. I feel I could spend the entire review just talking about the audio because the gameplay is so standard for a side scrolling [...] shooter."

While the game does offer a simultaneous two-player mode, the rest of the 'Bio Hazard Battle's gameplay is rather generic. The player has two main attacks; a rapid fire weapon and a stronger charged shot. Like 'R-Type', the players bio-ship is always accompanied by an orbiting smaller ship that varies according to the pickups collected. For someone not well versed in the genre (like me) the way this sub-weapon changes seems excessively complicated. 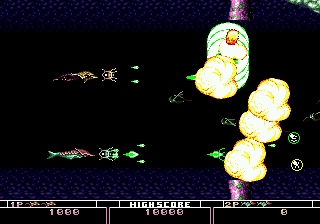 There are seven sub-weapons spread over four colours. Each can be levelled up three times but only if the correct coloured orb is collected. The four different ships have four different sub-weapons, one for each colour, but they also have at least one weapon in common with another. In the frenzy of shooting, to be honest I had no idea what I needed to collect to stay alive a bit longer. "Part of the strategy is not only picking up the weapons you want, but avoiding the ones you don't" suggested Game Fan magazine. However, I longed for the simplistically of something like 'Cotton 100%' where collecting any bonus made you stronger. I also find it baffling that losing a life downgrades your weapons as this makes the game neigh on impossible in later stages. It's a feature present in most side scrolling shooters, and some may argue it's a generic tradition, but I believe it to be excessively harsh. 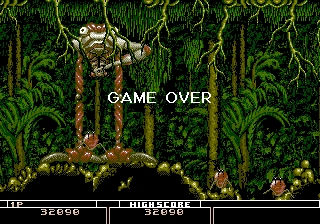 I'm of the opinion that games should support you when you're struggling, not make the experience harder for a failing player. This isn't the only time when the game suddenly gets excessively difficult though.

'Bio-Hazard Battle's first four stages are hard for a novice, but after this the game gets ridiculous. There seems to be a recent trend towards making this style of games "bullet hell" and the term is an apt description of the fifth stage. Bullets start to fill the screen, and enemy swarms become more numerous. To progress you need to memories enemy movement and placement, learning where to position your ship to destroy enemies before they appear on screen. The aforementioned sense of satisfaction can only be enjoyed in a shooter if the player knows what they need to do next time to succeed. Playing 'Bio Hazard Battle' became frustrating more than rewarding as I simply had no idea what I was doing wrong or crucially what I needed to do. Of course the difficulty level is variable, but shoot ‘em up fanatics consider easy mode blasphemy. To enjoy a scrolling shooter you need to feel victory has been earned but the line between grafting and frustration is wafer thin.

Many of the system's better shooters like the 'Thunder Force' games or 'Gleylancer' find this balance which is probably why they are more frequently remembered with fondness. However they can't match 'Bio Hazard Battle' in terms of atmosphere. With impressive but perhaps offensive music, repulsive enemies and inconsistent difficult the game isn't to everyone's taste. IGN were certainly not fans when they reviewed the Wii virtual console release of 'Bio Hazard Battle'. They suggested that "it isn’t all that surprising that upon its initial release in 1992 the game saw very little in the way of wide attention or critical acclaim." But sometimes there comes a time when a video game player should try the unusual. Rather like how this RPG fanboy sometimes wants to hang up the sword and shield and just venture into space and blow things up.

Where did I get this game?
Most of my Mega Drive games came from a bulk buy some years back. I wouldn’t have chosen this game, but for the price paid it was certainly worth it for a quick blast.
Posted by Julian Hill at 5/12/2017