Incredible people deal with high pressure jobs each day. But is it actually fun to answer emergency calls?

Developed by Jutsu Games
Released in 2018

Video games have always presented the opportunity to live a different life.  Typically enjoyment comes from stepping into shoes very different to our own; we become an army marine fighting for freedom or a busty adventurous aristocrat discovering ancient relics. But sometimes, it’s interesting to experience a life that could have been ours if we’d made different life choices. It’s a gamified exaggerated portrayal of a reality of course, but it’s an approximation that allows us to at least imagine what could be. The appropriately named ’911 Operator’ is a perfect example of this. As the name suggests the game puts you in control of a city's emergency services, answering calls as they come in and dispatching teams according to the need.  It’s a real-time strategy game, mixed with a resource management-sim. Gameplay revolves around juggling the police, medics and fire brigade. You’ll be prioritising and assessing the needs of cases and responding in the most efficient manner.

Surprisingly given its American focus, ‘911 Operator‘was made by Jutsu games, a small company of 5 people based in Warsaw, Poland. “We are making our way into professional game development now. We really enjoy innovative gameplays and... maps“they say.  Its modest origins aren’t obvious though, as a clean, stylish and functional interface has been favoured over flashy graphics and potentially distracting flourishes. 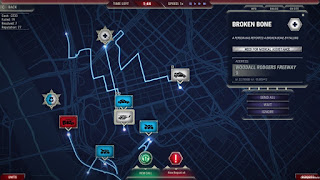 In the main body of the game, the action is entirely viewed from an overhead map, depicting a real world city. On-screen Icons represent where all the different emergency crews are located and as emergencies arise they are also shown as an icon. Each emergency is given a combination of colours that correspond with the response required. Accordingly, The core gameplay in ‘911 Operator’ could be described as a colour matching exercise. You simply select a response team and direct them to the event that matches their colour. Apparently many of the emergencies featured in the game are based on genuine 911 calls. “We also consult[ed] with professional policemen and medics, so do not worry about the reality of the game” boasts the developer.

True to life, there’s a wide range of emergencies that occur, and the game’s eShop listing states there’s “More than 140 types of reports to encounter”.   “Sometimes they’re serious and dramatic, sometimes funny or irritating” claims Jutsu games. You’ll need to send the police to break up a domestic dispute, cats stuck up trees require fire engines and someone who had lost a limb needs an ambulance. Different response teams are better equipped to deal with different types of emergencies, so while you must respond quickly you also have to act appropriately.  It’s a good idea to send the motorcycle cops to chase down speeders and you should get the rapid-response medics to a heart attack victim before he dies. You earn reputation points based on how well you deal with events and cost the city money for failing to respond in an appropriate way. As the developer notes,” The main statistic of the game is Reputation, which goes up every time you successfully resolve a report, and goes down each time someone dies, criminals escape or you fail to resolve a report in given time.” 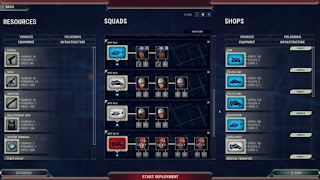 To pass a city and unlock a new one, you’ll need to maintain a specified among reputation while keeping your finances in the black. Any money that’s left over after a stage can be used to upgrade your emergency crews. Depending on the next city, you may also need to buy new guns and body armour for your police or load up the fire teams with natural disaster appropriate equipment. If somebody gets injured or lost in the line of duty, you'll also have to spend money replacing them by picking from possible candidates. 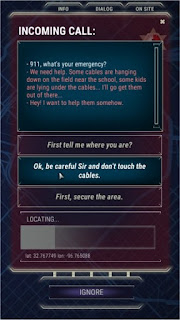 Given the title of the game, it’s no surprise that while juggling alerts you’ll also have to answer 911 calls. These occur half a dozen times during a city and take precedence over the emergencies that simply appear on the map. Fully voiced these calls are handled through point-and-click style dialogue options and not all conversations all as straightforward as you might expect. Some are simply false alarms, where you end up having a chat with an idiot who just wants a pizza. Others feature very desperate individuals that have to be handled with care and tact; identifying the exact nature of the call as quickly as possible while trying to coax out where they are. As the game reminds you, determining the location and the type of emergency crew required is always your first goal as a 911 operator. Some calls are particularly harrowing, especially as the game encourages you to play wearing headphones a practice that really immerses you in the experience.  In one memorable moment, A father makes a desperate call asking how best to deal with his daughter. However, as the conversation unfolds it becomes obvious that she can’t be saved and that the caller must instead say goodbye to her.  Thankfully, alongside desperation is joy. Another man on the side of a freeway has to be talked through delivering his wife’s baby. His joy at the end of the line is palpable and the voice acting throughout the game is very well done. “Ian, our operator's voice, was an actual emergency services dispatcher in Canada” notes the developer. “Among our developers, we have Peter, who also used to work as Fire Department Dispatcher”. Given there’s such a focus on the calls, the game would have fallen apart were the voices not up to scratch.

‘911 Operator‘ isn’t a story driven game. You’ll go into each shift not knowing what to expect and a good performance will lead to nothing except opening a New city. Unlike games like ‘Trauma Center’ or the ‘Phoenix Wright’ series there isn’t an over aching narrative, there isn’t a big villain behind the scenes causing the emergencies.” 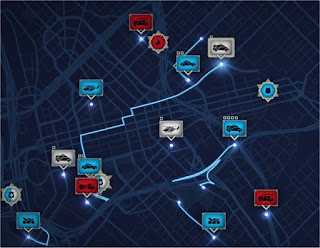 In the campaign mode, you will play on different cities like San Francisco or Washington DC, facing growing threats and more and more challenging tasks” the developer says. “Will you manage to operate 20 teams at once?” Although the ‘911 Operator’s mechanics are identical in all cities, there are calls and events unique to each location. Given the games strive for realism it does seem strange that some city specific events are clearly based on TV shows and movies. It was obvious that ‘Breaking Bad’ would be referenced when the game focused on Albuquerque rather than a more obvious larger city, like Houston, Las Vegas, Phoenix or Jacksonville. Indeed within the first few minutes calls mention a husband’s Meth lab, gang street fights and office block fires. Perhaps the more frivolous cases are there to dilute the serious point the game draw attention to. Every city is under resourced, not every person suffering can be saved but every villain can be caught. You have to priorities and the odds always feel stacked against you. ‘Papers Please’ style panic can set in, as you skim read the emergency’s description and make a quick impulsive decision, just to keep on top of the ever increasing caseload. In a rush, mistakes get made, and you will all too often fail a city because your fire crews were moving a broken down vehicle on a side road when they should have been putting out a blaze at a school. Indeed, even responding flippantly to a prank call can cost your reputation; so success requires absolute attention throughout.

It’s an intense game, best played in short doses but it takes time to get to grips with everything. ‘911 Operator’ starts off initially very overwhelming. A very brief tutorial gives an overview of the main gameplay but its broad strokes approach glosses over huge elements crucial to the game. The main mechanics are mentioned but there’s hardly any explanation as to how you perform the actions mentioned. The resource management screens that appear between each of the levels are not even acknowledged in the tutorial, despite being a key part of the game.

Although it’s apparently been “specifically redesigned for Nintendo Switch” ‘911 Operator’ never feels entirely at home on the console. The game can’t be played in table top mode because the text on screen is too small to read unless it’s inches from your face. The JoyCon controls feel incredibly imprecise, making it hard to pick exactly the right response team, especially when they are clustered together at one location. Even when you have control of the unit you need, unless you direct them to exactly the specific point on a city map, they won’t attend the emergency. Being in a close proximity isn’t enough and far too frequently I found I had failed to respond to a reported crime because my trusted employees had simply sat in their cars on a road around the corner from where a crime had been committed. The game was originally pitched on Kickstarter as a Steam game, and you can’t help but think it is probably more enjoyable on the platform it was intended for. 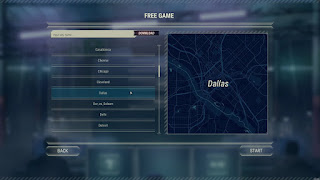 Outside of the main campaign, ‘911 Operator’ offers the opportunity to play the game in the town you live in.  During their Kickstarter campaign the developer promised they’d “made some rocket science to give an option to download and play on ANY REAL CITY in the world, thanks to OpenStreetMaps! Fight the crime and help people near your home in Free Game mode!”  The promise hasn’t quite materialised, as I live in the City of Rochester and that’s not in the game. However, apparently 900 local maps are on-offer, selectable from a Nintendo Switch-exclusive World Map feature. If you pick somewhere familiar though you may feel that the street names mentioned seem to be entirely randomly chosen. When playing in London I had calls to Taviton Street, Bexley Avenue and Honiton Road, but Oxford Circus, Westminster and Charing Cross didn’t have any need for emergency vehicles.  Clearly the idea is that you’re pretending you're actually helping the community closest to you, but the illusion only works if you’re in America. If a British person dialled 911 they would have no one answer. Even if they called 999 they probably wouldn’t speak to someone with an American/Canadian accent. A Brit also wouldn’t be reporting suspicious activity in a mall nor would they be alerting authorities to a blocked freeway. If anything, the free mode draws attention to the fact that the main gameplay doesn't ever radically change. After a few hours the novelty of the game has worn off and the phone calls start to repeat.

As charming and patient as he is, the 911 operator becomes a bit repetitive after a while, which perhaps makes the game bizarrely more authentic. Like real life, you're dealing with a lot of the same issues, in fact you'll deal with a lot of the same callers multiple times. As much fun as I had with ‘911 Operator’, I must admit that were it my real day job, I wouldn’t be filled with job satisfaction. There may be emotional highs but there’s also unpleasantness to deal with, and I’m simply not emotionally strong enough to regularly cope with that.

Clearly, it’s a nice idea to experience another life or career. However, it’s only through a video game that you can quit your new job when the monotony sets in.

Where did I get this game from?
Initially sold for £13.49 on the eShop I picking this game up for 93% off; just £0.89 in a sale. I got a lot of enjoyment for less than a pound, and at that price anyone with even a passing interest should take a punt.