Is it wrong to be critical of a game for being ambitious? Ambition does after all inspire creativity, pushes boundaries and forges new genres. Without the ability to fulfil theses ambitions though, however noble and exciting they may be, they are doomed to failure. 'Wing Commander' feels very much like a game restricted by technology. There are almost certainly the makings of something wonderful in the game, but the realisation of designer, writer and programmer Chris Roberts' dream does not equate to an entirely enjoyable game.


It's not a problem that's limited to the Super Nintendo as the original game, released some years earlier on the PC and then on the Amiga, was only at it's best on top of the range machines. On the entry level Amiga 500 for example, frame rates were so inconsistent the game was near impossible to play. Amiga Power indeed wrote that while it's a landmark product it's "hugely flawed on a standard Amiga. Maybe compromises would have been better rather than recreate the entire [PC] game right down to the complex graphics". 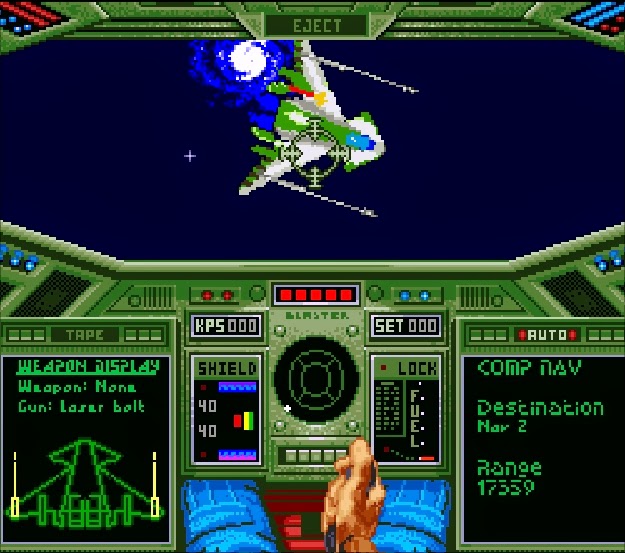 The main gameplay was nothing new of course. Putting the player in the cockpit of a space ship and having them traverse space had been seen in the 'Star Wars' arcade game and games like 'Elite'. For a Snes player unfamiliar with the game the most obvious point of comparison is the asteroid level in 'Starwing', only slightly less arcadey with a greater focus on radar and equipment displays. However without the Super FX chip the universe seen in 'Wing Commander' is displayed using scaling pixelated sprites rather than more fluid and versatile polygons. As such the experience is much less immersive than Nintendo's more famous space shooter, looking crude on the Snes when compared to the PC original and similar to the Amiga 500 version so criticised by Amiga Power. If the PC version left jaws ajar, the impact of the Snes version wouldn’t have been so arresting. Ships no longer rotate fluidly and instead can only be viewed from specific angles meaning they move through space in a juddery manner. This is made worse by a fluctuating frame rate even though only one enemy is within firing range at a time. This limited number of foes in turn means the thrill of combat applauded in the original PC game is distinctly absent on consoles.

The flight sections of 'Wing Commander' clearly tested what was possible on the Super Nintendo, but it is not for these cockpit sections that the game is so fondly remembered. Amiga Format once said that “’Wing Commander’ isn’t just a flying simulation. It’s an atmospheric cinematic-type cocktail of a shoot-em up, flight sim and role playing game”. Making up half the game, there's as much a focus on narrative as there is on combat. Certainly inspired by the sweeping space epics that had defined eighties cinema and TV, Roberts wanted to "create a game with the same sense of immersion and world that [he] felt when watching ‘Star Wars’ or ‘Battlestar Galactica’". While later entries in the 'Wing Commander' series are noted for their full motion videos and Hollywood actors, the first game uses more traditional methods to advance story. Upon pressuring start it is perhaps jarring that the first thing a player has to do is talk to random folk in a space ship’s bar. 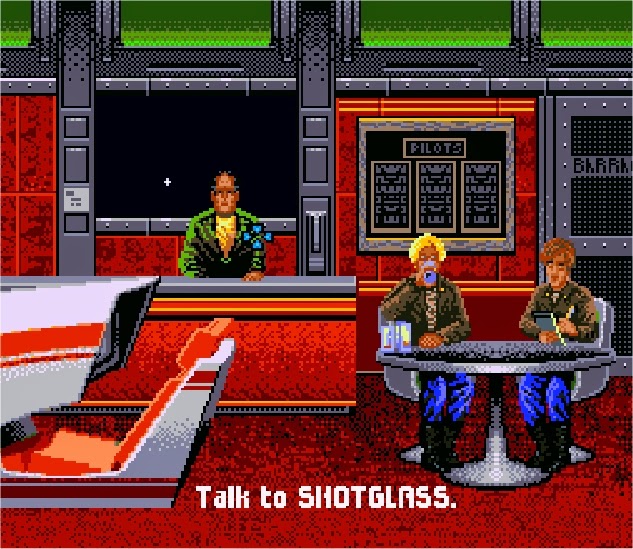 Echoing a point and click adventure, details of the universe are thrust upon the player. Without much involvement from the player and in a few lines of onscreen text, three talking heads have introduced a grand narrative and a sense of purpose regardless of whether the player cared or not. Evidently, the heroes are at war with a race of alien cat monsters called the Kilrathi and the player is adopting the role of a new recruit in the resistance. This conflict alluded to is greatly expanded on a few screens later, in the mission briefing when a lot of time is given to what you must do with no explanation of how you will do it. It's a briefing that ends with a close up of characters face looking bewildered and intimidated as the player probably does. In later sequels this character will become known as Christopher Blair, so named because in this game he has blue hair.

Blair will in later sequels be played by Mark Hamill of ‘Star Wars’ fame, but when the player is first introduced to him, he is rendered in pixels and not nearly enough colours. At the time of 'Wing Commander's first release on the PC, this focus on character may have been exciting and unusual but calling it an "interactive movie" is a little insulting to cinema, almost as insulting as the huge range of racial stereotypes that are depended on to define the other non-playable characters in fact. Space it seems is populated by a range of one dimensional people, who endlessly repeat the same thing and do it a language that is only ever seen in insulting comedy films. 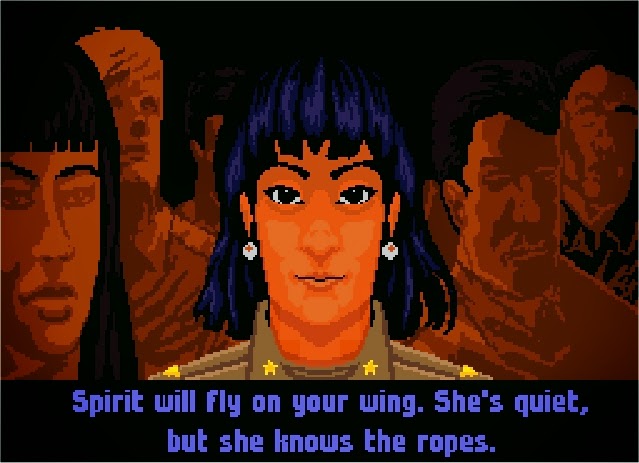 It’s failing that the original game’s director seems completely oblivious to. Instead Chris Roberts is of the opinion that “’Wing Commander was always about the characters. From the very beginning the vision was to have a collection of interesting pilots, each with unique personalities and flying styles, like in a cool movie” With no voice over perhaps a dependence on cliché though does mean you quickly can imagine how a specific pilot may sound. Either that or it’s evidence that the ambitions of ‘Wing Commanders’ creator far exceeding his writing ability. Anyone can dream of writing a rich narrative, but not all of us have the capacity or creative writing flare to make it a reality. As with the technology hampering the flying sections, it may have been ambitious to have a shooting game that was one part space combat one part interactive drama, but the story itself and its implementation of it leaves a lot to be desired.

Super Play too saw the games short comings and were pretty damning of the game in general; criticism which flew in the face of the unanimous praise reviewers had showered on the Amiga and PC releases over the previous years. Matt Bielby believed the Snes version was "a solid representation of the PC original considering the Super Nintendo's 3D limitations... However [he] can't help feeling that the original was vastly over-rated, translating into a very average Super Nintendo game." Such was the struggle of making the flying sections possible on more humble hardware, it took years of trial and error to port the PC game to the Nintendo console. In the intervening period many had copied the story segments seen in ‘Wing Commander’ so now what was originally seen as being pioneering story telling had become almost gaming staples. "The interactive movie stuff" Bielby jokes "may have been impressive in its time, but what you get here we've seen 1000 times before. Its fun, does work to build up an atmosphere, but it's hardly any more an interactive movie than 'Pilotwings'. 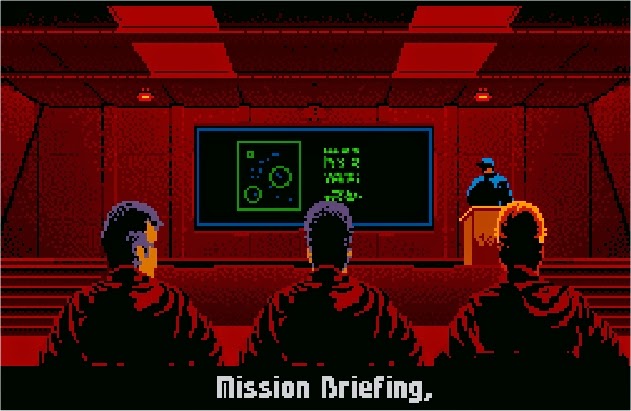 It's easy to mock and belittle the baby steps of a game establishing a new genre. It’s struggling to find the best way of realising grand ideas and inevitably the first attempt isn’t always the best way to do things in retrospect. What does work though is repeated endlessly, which in turn makes the originator seems predictable and generic. Tragically despite best intentions, what isn’t a success end up looking embarrassing and dated. Regardless of the amount of success or failure, without the pioneers, the risk takers and their ambitions, games would remain stagnant. As Retro Gamer put it, "without 'Wing Commander' the industry would not be where it is today".  Without ‘Wing Commander’ you have to ask if ‘Starwing’ would exist, even if the latter game is infinitely more fun.  As such, playing ‘Wing Commander’ now is most interesting when looked at from a historical perspective as the game play itself is hard to enjoy. It’s fiddly and hard to be precise with a d pad; resulting in many dog fights ending just because you could hit the enemy as quickly as they could hit you. Worse still there is an embarrassing lack of save feature even though the barracks room that was used to save in the home computer versions of the game still exists. For a game of this length I can’t imagine anyone who would have played through the game in one sitting especially as it’s so infuriating at times. 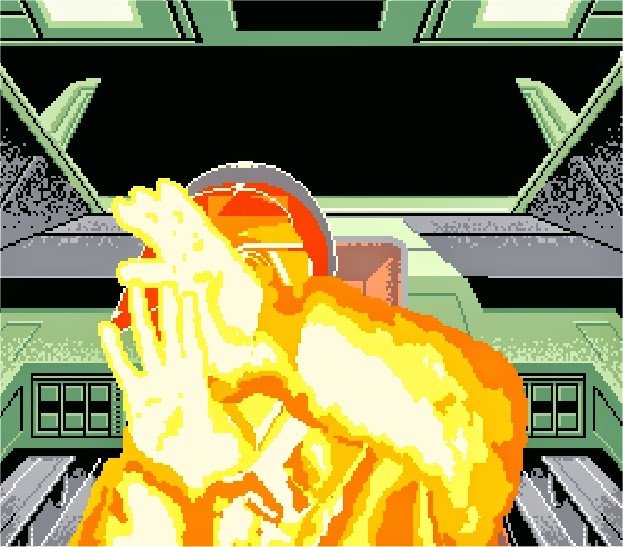 Missions can be lost on your journey back to the mother ship simply because you were struck by an asteroid you can’t avoid. Squad team mates seem to always get in the way of you firepower, unless you specifically tell them to avoid enemies. Making things worse, so complex is the controls that certain actions can only be performed when four buttons are held simultaneously. Even with the instruction book in front of me I spent an hour trying to first dock with the mother ship, while I struggled to complete the ridiculous sequence of button presses that the game demanded.  But despite all of these huge problems, it’s still a game worth playing. Buried inside a game so impenetrable that you have to read the manual to finish your first mission, are glimmers of fantastic ideas that have been attempted but not perfectly realised.

What’s clear is that in his prime, Chris Roberts was a visionary game designer. Technical or creative limitations may have meant his ambitions are not fulfilled in ‘Wing Commander’ but the ideas he introduced are still echoed in the games to this day. After all, when you have Cliff “Cliffy B” Bleszinski tweeting about your games and legacy, you must have been doing something right.

As may have been obvious in my last few posts, a recently birthday led to lots of games being wrapped by my family and lavished upon me. Wanting to join in the fun, my parents asked which games they could buy me to write about. I gave them a list of ‘Buy It Now auctions’ with a simple instruction, “buy whichever one you think I will enjoy most”. My Mum decided upon ‘Wing Commander’, perhaps inspired by her own love of ‘Star Trek’ which the game is reminiscent of. In a world of free Roms and emulation, I would encourage anyone with a passing interest in narrative driven games to at least have a try. It hasn’t aged well, but there is certainly something enjoyable about tracing the roots of interactive cinema, even if that retrospective search turns out much more fun than the game itself.
Posted by Julian Hill at 6/20/2014