When your hobby is collecting things that are two decades old you have no choice but to buy second hand. You can't walk into a shop to buy a game - they simply don't make SNES games anymore. So everything in my collection was originally owned by at least one other person. Sometimes there are telltale signs as to who this person was: Game saves are often left undeleted revealing how far the previous owner got into the game and how much time they invested. Condition of the box also suggests if they loved and cherished it, or just had it knocking around in a drawer or rotting in a damp attic. You can even get glimpses of the first owner’s lifestyle if you study closely, you can tell if they lived in a smokey house, if they cleaned their games or let them get splattered with various forms of food and drink. Provided I can peel them off I don't mind a price sticker on a box either. It’s interesting to see how much a game sold for and where it was originally purchased from (in many cases shops that have vanished now or ones that you simply can't imagine selling games!)

Normally you have to guess at the back story, fill in gaps using the clues you have and an awful lot of presumption. A recent auction I saw however caught my eye, and this was because if its description:


"Unirally for the SNES. This is the only SNES game I have fully complete. Even comes with the price tag I originally paid for this. 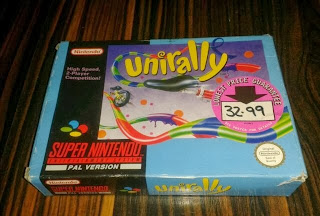 Purchased from the game shop next door to mcdonalds while I was on my lunch break from 1 of my first jobs, with my own hard earned cash.

I don't expect to get this back now but more than willing to let you give it try, remember you not just buying a game here. But a game with a life story.

How great would it be to own a game that was so loved by its first owner? As the seller writes, it's more than a box and a cartridge; it's a game they worked to own and one that they enjoyed so much they played it to completion, prioritising it over all other games they owned. They clearly had really loved Unirally.

For the sake if this blog I wish I could say that this is the game I now own, but sadly it isn't. I bid for this copy, even contacting the seller and chatting briefly about his description and love for the game. I bid, but I was snipped by 40p with two seconds to go. The much loved Unirally went to someone else. But have no fear dear reader, the copy I now own also, conveniently and amazingly, came from the same chain of shops for the same price.

Unlike the eBay seller I didn't know too much about Unirally, certainly not enough to warrant saving every penny earned to buy it. My knowledge of it mainly is from the controversy this fun and in-offensive bike racing game caused. Coming out in the end of1994, Uniracers (as the game was known in America) was not something that was enjoyed by a little fledging animation company called Pixar. Shortly after the game's release, developer DMA Design were sued for allegedly copying the unicycle design and concept from a short film 'Red's Dream' that Pixar had released 7 years earlier. Mike Dailly, one of the developers at DMA Design, may have believed that "the problem with Pixar was that they seemed to think that any computer generated unicycle was owned by them" but in truth though, the character and look of the in game unicycles look entirely lifted from the film. DMA Design lost the lawsuit and as a result Nintendo couldn't make any more carts and withdraw from sale any unsold ones.

Considering that Unirally had such a limited release, of only 300,000 copies in the initial run, it's surprising it's not hugely expensive. In fact having spent a bit if time with it (though not as much time as others who completed it 100%) I can safely say it’s a bit of an undiscovered gem.

There isn't a huge amount to the game, a quirky racer where your one goal is to go faster than your opponent. Viewed from a side-on 2D perspective, one-on-one races take place along dizzying circuits of coloured pipes. Some are straight point-to-point races, others laps around rollercoaster layouts. It's competitive gaming but it’s simple. There are no imbalanced power-ups, no rubber band AI, and no way for the game to favour one player over the other. Victory comes from skill, from practice, from knowing how to anticipate 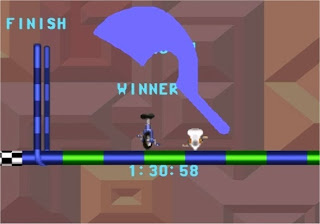 the course hazards and turn them into opportunities to perform the game’s one feature - stunts. While in mid-air, you can flip and roll in multiple directions, creating combinations that if successfully landed grants you a boost in acceleration. But getting too Evel Knievel is risky, as misjudge a spin or land badly and you'll get penalised giving your opponent the advantage. If that sounds jolly fun in one player, just imagine it with a friend. Two player matches are all done simultaneously using the traditional sideways split screen. However, Unirally even allowed for eight player tournaments with league tables and surprisingly detailed stats and charts. With such attention to multiplayer, it’s pretty obvious that playing the game on your own is only playing half the game. 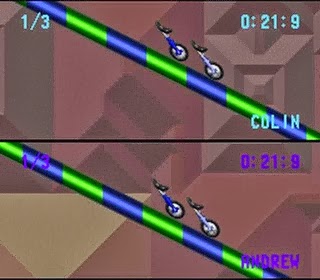 What most surprising about Unirally for someone who has never played it before is just how rubbish it looks, it's just the same pipes and backgrounds over and over again. But as seems to be the rule for the game its simplicity maximises its appeal. Looks are so unimportant to enjoying this game that the manual for the game actually states, "there are far more important things to work up a sweat about than some pretty scenery". The looks are basic for a simple reason, the track needs to be clear especially when the game gathers speed and if you’re to see as much of the course ahead as possible, the sprites have to be small. Small but perfectly pixelated, expressive despite having no facial features. Everything in Unirally has a comical slant. In fact the game goes to great length to ramp up the humour, not within the game itself but in its manual.

Considering my obsession with having every game boxed, it seems surprising I so rarely 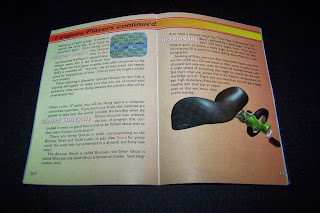 mention the manuals, but if there was ever a game to seek out a boxed complete version Unirally would be it. The instruction book is brilliant, completely bonkers but brilliant. With a back-story involving the Unigod (creating a series of races to seduce a goddess having run out of ways to impress her), it’s crazy enough to rival the Katamari Damacy games. I also never want to be a man who doesn’t love an instruction book that fills empty pages with written discussions on the merits of frozen pizza.

Get rid of the awful 90s softrock soundtrack and I can't see why Unirally wouldn't do really well today. Unlike the aforementioned ebay seller there’s no way people would feel happy to spend £32 on it today, but as a downloadable title or game on a smart phone it would be perfect. It certainly looks on par with the majority of games on the App Store, and this would be one title were tilt based control would be perfect.  "I can't stress too much that it looks rubbish but plays well... give it a chance. As a fun racer it's worth a go, and it shows that game play is more important than graphics." Super Play’s words in 1994 still ring true today. Unirally has a simplicity and accessibility that gives lasting appeal, a game not bogged down in distractions and complicated unnecessary game play additions. It proves that if you have the right simple game play idea, just sticking to it and honing it to excellence is enough. A game so simple even a three year old can play it, something I know for a fact. No matter what else Unirally is, on a personal level it will always be the first game I actually played with my toddler daughter with her doing more than blindly stabbing at buttons.
From a collectors point of view I’m very pleased I own Unirally, complete in a near mint box with that oh so humorous manual. With such a limited run my bet is this game will become more and more sort after.


After being out bid in the last seconds for the copy I wanted, I actually put my desire to get Unirally to one side and focused on other things. As is often the way though, when you stop looking for something it finds you. If like me you intend to buy boxed complete SNES games as cheaply as possible, you should definitely look into buying in bulk. My copy of Unirally came in a lot of 9 games I bought for £80 including postage. I can’t stress how good a condition it is, it looks just like it did when first purchased and includes the often missing course maps. I’m pleased to have paid a little under £9 for it, especially as it wasn’t one of the best titles in the bundle – a little teaser for future blog posts there!