It’s weird what you remember. I have forgotten the details of birthdays, can’t remember my first trip to a zoo or family holidays, I’ve even forgotten the names of all my pets (though I had 13 guinea pigs when I was younger so that’s at least partly excusable). Buried deep in my head though, is a wealth of useless information that for some reason my brain has chosen to priorities. The words to the theme tunes to The Racoons, and Gladiators. The dance moves to the Macarena and how to romp through Buster Busts Loose in one sitting. The first two of these is great: Being able to tell people that a Gladiator needs to have ‘the speed, the strength, the heart to be a winner’ always fills a quiet moments in the office and who doesn’t love to rock out to the Macarena at parties. The last of these perfect recalls though is frustrating to have.

I think I’ve mentioned elsewhere on this blog that I love cartoons – even now;  from Peppa Pig to Tron Uprsing.  One of my favourite afters school shows was Tiny Toon Adventures, which for the ill-informed was a collection of madcap adventures featuring younger versions of the original Warner Brothers favourites. From what I remember the cartoon, was an equal mix of wink-wink nudge-nudge jokes, film parodies, a wash with lurid child appealing colours and relentless energy. The game on the SNES followed the same logic, a side scrolling platformer, gorgeously colourful and built around a frantic dash mechanic. Each level parodies a different film genre, be it cowboy or horror. This gives a
flimsy excuse as to why Buster Bunny (Bugs’ distant second nephew twice removed) can start of in his school but end up fighting a Darth Vader a-like Plucky Duck (wink-wink nudge-nudge ) in a Space Station. I remember reading in Super Play how well received it had been, particularly in Japan where evidently Hamton (Porky Pigs’ aunts’ step-brother’s best friend’s neighbour) and Dizzy Devil (Taz’s long-lost lodger’s sister’s nephew) were massively popular. Magazine scores and global reception didn’t matter too much to me though, there was no question that I wouldn’t want one of my favourite cartoons in game form.


Clearly I played this game a lot in my childhood, not that I really remember any specific night spent playing until the early hours. The evidence that I wasted my youth playing a
game is locked in my muscle memory and my self-conscious.  Playing the game now, was a pretty depressing experience. Depressing because I was so excited about returning to a childhood favourite again, yet I finished it in one sitting. Not that it’s an easy game; it’s just that I knew it to well even if I can’t remember playing it. Without thinking too much I knew where every off screen bonus was hidden, the route through maze levels and even the text to cut screens.  The game has a great diverse range of boss fights,  that all behave uniquely and all need be approached in a different way. 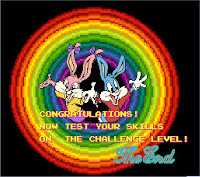 This didn’t matter I somehow knew how to beat them.  In some cases, without taking any damage at all and even knowing where to stand to avoid harm. Initially, I thought perhaps it was just an easy game. This belief evaporated when I checked ‘Lets Play’ videos on YouTube and saw new players struggling on the things I breezed through.  I notched the game up to hard mode, which true to its name proved a bigger challenge. But by then (having played it through once) I just couldn’t face giving up the couple of hours needed to finish it – the ending is the same as a Normal play through.

With this limited time spent playing the game it’s hard to be too objective about its
quality. I certainly enjoyed it, and it’s impossible to say that the game isn’t diverse – although this doesn’t mean the level of fun and quality is consistent across it. For every great haunted house stage, there is an appalling infuriating American Football level, where success depends on you simply selecting the option ‘run’ rather than ‘pass’ and jumping over enemies hoping luck is on your side. Maybe it’s a cultural thing, American audiences would perhaps have loved playing their favourite sport with this colourful cast of characters but to me this level was unfamiliar and dull. It’s at odds with the original thinking of the other stages, where new ideas are frequent. The back of the box boasts that with all the between level mini games, ‘really it’s like playing 11 games in one”. This is 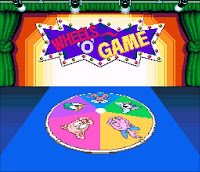 stretching the phrase ‘game’ beyond reasonable definitions. Though one level when you play as Furball (Sylvester’s mate’s hair dresser’s youngest daughter’s live in lover) is great fun, most are throw away experiences a minute or so long and sometimes just involving picking  which order to place characters on scales, a random bingo game or completing a very simple sliding puzzle.  If anyone bought the game for these, they would have been disappointed. I found myself just trying to get through them as quickly as possible to get back to the platforming fun.

The flimsy mini games though, are not the game lowest point. That comes about 15 minutes into play at the end of the second level. Buster has been thrust into frontier
country and after a short and fun level spent skipping (literally) through Sunset Rider- esque locale he has to board a train. What follows is the most frustrating, brutally hard and infuriating low point of what is otherwise an enjoyable (though short) game. I’m sure I’m not alone in thinking that this far too long stretch of game, filled with it’s pixel perfect leaps of faith and off screen enemies throwing projectiles  is harder than any other end of level boss combined . To add insult to injury, not only does the screen auto-scroll but the speed of this scroll changes depending on what it thinks you should be doing. So unless you dash or jump and the very second it thinks you should, you will be either pushed off the screen or caught behind an object. In the game’s defence there is an on screen prompt (not dissimilar to modern day QTEs) but these appear for fractions of seconds and unless you pre-empt them, by the time they have registered with your brain its already too late.  Even if you do manage to know when to dash (because the scroll will kill you if you don’t) and when not to 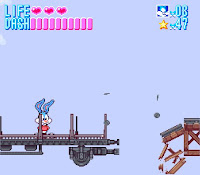 (because the scroll will kill you if you do) the imprecise way of stopping while dashing could see you falling off a platform anyway. Getting through the stage requires pixel perfect recollection (which surprisingly I still had even after all this time); it’s a test of memory rather than skill. The fact this awful train section comes so early in the game is madness. I wonder how many players downshifted to easy mode just to skip the whole thing – even if this would have been at the expense of playing every later boss and having to skip one level entirely.

But out of this darkness comes two things that at least were good, a ‘Back to the Future’ joke at the end of the level and the music. Most songs are a different interpretation of the main Tiny Toons theme, but each also is in keeping with the level's genre.  Orchestral, jaunty, memorable. As with all Konami published games from this era alongside excellent sound comes superb graphics throughout. Foreground and background parallax scrolling, mode 7 whizzy effects, clean detailed well animated sprites. It really does feel like everything has been thrown at this game to make it look and sound as nice as possible.
It’s just a shame it’s over too quickly and I’d imagine even those new to the game wouldn’t play it for much longer than 5 or so hours, and that’s allowing 2 to be spent on the maddening train stage. As a child there was no way I was ever going to dislike a Tiny Toons game especially one that looks and sounds as nice as this one. But stripping that back, it’s hard to suggest anyone pay too much for a copy nowadays. Of the six levels, one and a half are awful, which is a pretty poor ratio. Do the remainder make up for it? Possibly, but even getting to the best stages requires a player with patience and a sense of masochism, as that train will always be a level and a half away from pressing that start button.

How did I get this?
Much like the American Football stage, the story of acquisition is dull and forgettable. I bought a near mint copy on eBay for £6.74 including P&P. This works out about £3.40 per hour I spent playing.