So you've made a game and it's done so well that you've already made two sequels to capitalise on it's success. But what on earth do you do now? Your audience has begun to suspect that the last game was simply the second one with new levels and plot. Using the same characters, art assets and music probably was a bit of a giveaway. You can’t really push out a fourth game cut using the same template, but you've invested a lot of time, effort and money developing characters - you don't want to throw that away. But what do you do with them that the public will like ? You gaze up and down the sales charts, they are filled with sports , driving and shooting titles. An idea hits and in that moment you realise your next title is going to be a spin off.

Spin off titles have always been seen as a good idea for all involved. Although developers have to swim in the waters of a new genre at least they have the familiarity of their characters and style to keep them a float. Publishers are happy, a recognisable face on a box sells a game, even if it's nothing like the any game that's featured that character before. For the consumer it's good too. Favourite characters are breathing again and though they are  doing strange and unusual things at least they are doing something.

The problem is that for every 'Mario Kart' there are two 'Mega Man Soccer's. Characters that work well in one genre do not always translate flawlessly, more often than not cracks show and the spin off is exposed for what it truely is. It’s a cheap cash grab, copying whats popular and wrapping it up in a the appealing design of an established franchise. But in the sea of mediocre games with identifiable characters, float beacons of light; Spin off games that are so good they actually eclipse the original source game. ‘Puzzle Bobble’ (Or ‘Bust-a-move’ as it is known in the US, is one such example.

It is a puzzle game that takes the two main protagonists form the popular platformer ‘Bubble Bobble’, although it wouldn’t surprise me if many of the people who play a ‘Puzzle Bobble’ game now would even know that adorable characters have been lifted from another game. It’s a spin off series that actually has more sequels than the original game; there are 28 ‘Puzzle Bobble’ games and only 12 ‘Bubble Bobble’-esque games. In fact, while the original platform series has not seen a release since 2009, Taito continue to support ‘Puzzle Bobble’ with releases on mobiles and current generation hand-helds.

The truth is that ‘Puzzle Bobble’ would have been a success with or without ‘Bubble Bobble’s central characters; Bub and Bob. Their inclusion simply adds charm and cuteness to what is already a near –perfect puzzle game. 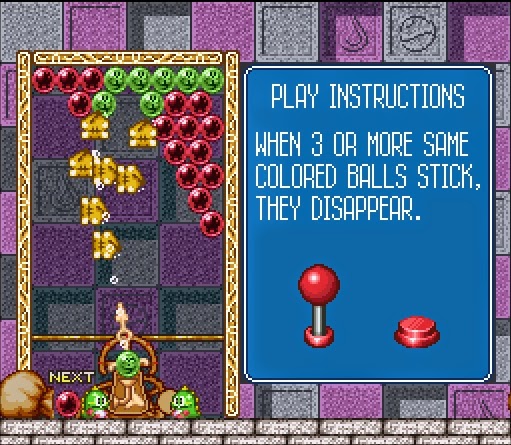 Like all the best brain taxing games, the premise is simple but amazingly hard to describe. Pre-arranged bubbles litter the game space and they slowly descend towards the player’s avatars at the bottom of the screen. If these bubbles hit Bub or Bob, the game is over. The only way for the two dragons to avoid this strangely ironic fate (considering they normally use bubbles to kill others) is to fling more bubbles into the slowly reducing available game space. To do this the player controls a device called a "pointer", which aims and fires a randomly coloured single bubble up the screen. If the player can clump together three bubbles of the same colour, they will disappear. As these bubbles pop, any others that were attached to these will also vanish. Clearing the screen of all bubbles allows the player to progresses to the next level. Of course as the player adds bubbles to the screen the number of bubbles they have to clear increases, so precision placing of bubbles is essential. Fortunately before long the player will find themselves bouncing bubbles off the edges of the play space, and creating chain reactions – two skills that mean even the most cluttered of starting screens can be cleared. 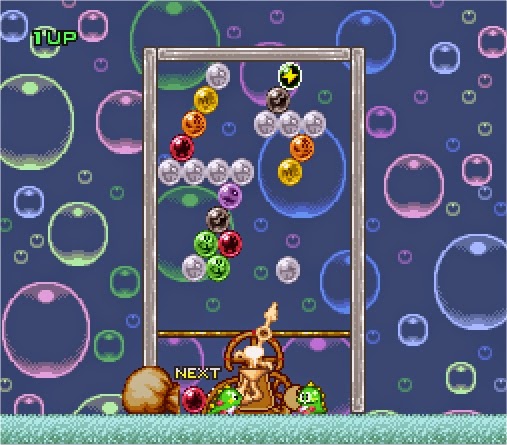 Despite many ‘Puzzle Bobble’ games being released after it, this Snes iteration, still for me, remains one of the best in the series. Unlike its later sequels it’s not bogged down with un-necessary gimmicks, or deliberately weird ‘zainy’ characters and story. As with many genres, keeping things simple keeps a game accessible and Super Nintendo ‘Puzzle Bobble’ can really be enjoyed by anyone. As Tony Mott said in his Super Play review it’s “a video game for people who don’t play video games”.  It literally takes 10 seconds to go from inserting the cart to playing the game; there’s no convoluted menus to navigate, or variables to set. There’s simply the choice between the puzzle mode or the versus mode. 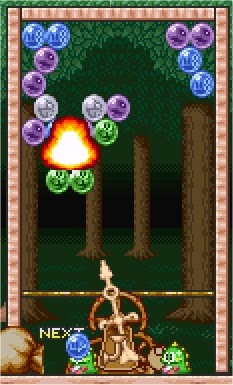 In the standard puzzle mode, the difficulty curve is pitched perfectly. Though special bubbles like the electric, flood and fire bubbles do appear, they are introduced in a way that keeps the game fresh rather than intimidates a player.

For any puzzle game to work, the player should feel that they were at fault if they fail a challenge, they should never feel that the game was obtuse or that success was beyond their grasp. This is the true strength of ‘Puzzle Bobble’. Though it may get monotonous after extended play, it never loses that ‘one more go’ drive when a particularly tricky levels beats you. As Nintendo Power said at the time of release “It’s one of those games that is nearly impossible to abandon. An action puzzler that can capture player’s hearts and imaginations.”

The visuals are unashamedly cute with the character sprites and animation actually taken from ‘Bubble Bobble’s sequel ‘Bubble Symphony’. What’s most impressive though is that despite being beautifully animated and adorable, Bub and Bob aren’t very prominent. In a puzzle game this is a good thing as it means they are not distracting. The player’s focus is always on the bubbles, which are after all the true stars of the game.  This is why I favour the 16 bit edition of the game over later versions, there aren’t distracting animated backgrounds or bubbles popping in a shower of stars and excess. Everything on show here is beautifully drawn, but entirely functional. It’s cute and charming, but not at the expense of game play. It’s an ideal Electronic Gaming Monthly magazine agreed with, believing ‘Puzzle Bobble’ “is a game that relies more on solid play than flashy graphics and effects”.

I can be less complimentary about the audio though, which really does test the patience. Throughout the bulk of the one player campaign, only one song is heard. To make matters worse, once you get the hang of the game a great number of levels can be finished in less than 20 seconds. Ultimately this means, in a run through of the game you will actually hear the same music over and over again, to the point of irritation. The tune may be sweet and lovely, but when you’ve heard it over a hundred times in an hour its allure quickly fades. Indeed it’s not until you hear a 16 bit remix of the original ‘Bubble Bobble’ theme in ‘Puzzle Bobble’s credits that you realise the music in the spin off really isn’t a patch on the original game’s. 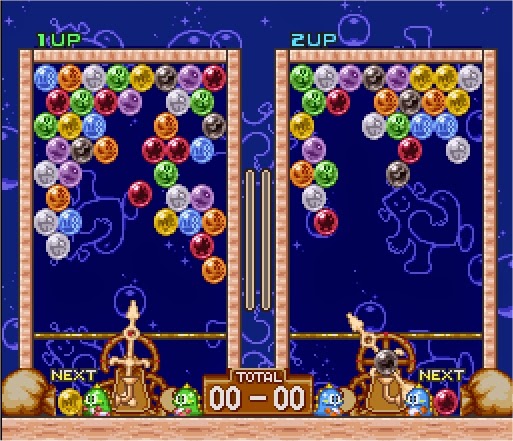 There are 100 levels in the one player puzzle mode, ending in a boss fight. However, once you have grasped how to successfully use the bubble pointer, these prove little challenge and the game can be completed in one sitting within 90 minutes.  As with so many puzzle games, ‘Puzzle Bobble’ really comes alive when two people play against each other. Frantic bubble popping with two really is the best way to play the game especially as the music is better.  As Super Play magazine once said; “the single player mode is fairly forgettable but its two-player mode has been known to force an office to grind to a halt for an afternoon, such is the volume of competitive juices its able to squeeze from its participants”. Both players have their own play space (both visible on screen) and an identical arrangement of coloured bubbles. Instead of having to clear your play space of bubbles entirely , now the goal is make sure the descending bubbles reach your avatar after your opponent. When a player removes a large group (four bubbles or more) some of those removed are transferred to the opponent's half of the screen, usually hampering their efforts to avoid the descending bubbles from reaching the bottom of their space. Consequently, bulk bubble popping when playing against someone has greater consequence and adds so much more depth to the game. Now the player must decide if it’s best to try and simply clear the screen as quickly as possible, (as is the case in puzzle mode) or if it’s worth risking bubble suffocation waiting for the right bubble to appear that will make lots of bubbles pop at once. 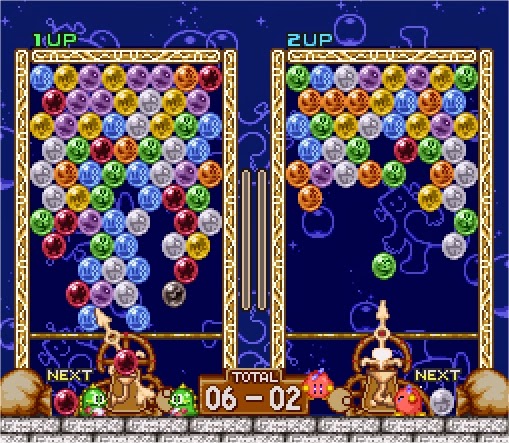 What’s good about this Snes version of ‘Puzzle Bobble’ is that the computer can play as your opponent, in the absence of a real life chum to play with. Though the artificial intelligence makes some ludicrous decisions sometimes, the game does present a robust challenge. This really does mean that with or without a real life opponent versus mode remains the optimal way to play ‘Puzzle Bobble’.

And playing ‘Puzzle Bobble’ really is something that everyone should do. Ideally you’ll opt for this Super Nintendo version but the run-away success of this spin off series really does mean that I doubt it’s possible to own a games playing device that doesn’t have the game available in one form or another.

It may be a puzzle game that has spun off from a platform game, but this isn’t the reason why ‘Puzzle Bobble’ is worth you attention. It’s a fantastic premise for a game on its own merit. When combined with the best bit of ‘Bubble Bobble’ (namely its two main characters) ‘Puzzle Bobble’ really does become a winning package, one that compliments the source material rather than tarnishes it.

Where did I get this game from?
Keen to thank me for helping me promote his new online business, a Japan based friend wanted to send me a game he knew I would enjoy. By picking the Super Famicom edition of ‘Puzzle Bobble’ he really did excel himself. I therefore paid nothing to get this game, and even though its the Japanese release of the game there is very little Asian text in the game, certainly not enough to make the game unplayable. As a huge fan of puzzling games, and ‘Bubble Bobble’ on the NES I knew I would enjoy this game. I never expected to enjoy it more than the platformer I loved as a child though.