Close your eyes and think of a "Mario Game". Chances are you’re now imagining that portly plumber jumping across platformsin 2D, 3D or even 2.5D. If not that then he is almost certainly driving a kart, playing a sport or having some sort of party. One thing I guarantee you're not imaging is Mario attempting a complex number logic puzzle that can take half an hour to solve.

It was the goal with the Wii and to a lesser extent the DS for Nintendo to find and seduce new audiences that were not being served by the likes of Microsoft and Sony. It was a brilliant decision that saw Nintendo's profits soar for a number of years. People who traditionally didn’t consider themselves games players were finding themselves in Game stores, buying consoles and titles not for others but for themselves. Housewives had their Wii Fits and a more senior audience had Brain Training and the Professor Layton series. People spoke of these "puzzle games" as if they were a new idea. They weren't of course. This very same audience would have loved Picross 11 years earlier when it was released on the GameBoy.

It’s a game that is perfect for anyone who loves a crossword, but hates letters. 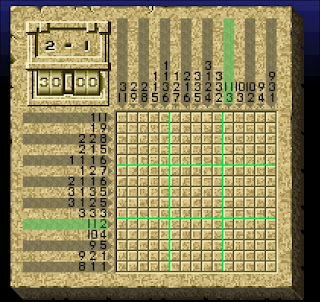 A fine mix of patience, logic and luck. The idea sounds massively complex but is actually really simple. To solve a puzzle the player must remove certain boxes from a grid of varying sizes to create a picture. The numbers on the top and left side of the grid hints towards which are the correct boxes to loose.  For example, if the puzzle is on a 10 by 10 grid, and one of the numbers at the top is a 10, that means all boxes should be removed. If the numbers 3 and 4 are at the left of a row, that means that all but three of the 10 boxes make up part of the picture. The player has to figure out which three and four consecutive boxes must be removed, and also which three must be left.  The game is timed and for every error you make you lose this precious time. To help you out, if you’re sure the box is a keeper then you can mark it with an X to remind you not to remove it. At the start of each puzzle, you are given the option of revealing one vertical, and one horizontal line but otherwise the puzzle must be solved entirely using the numbers around each row and column. The name reflects this familiar yet new puzzle style, it’s a picture cross word Pic-(c)ross.

Every Sudoku loving granny would lap Picross up, yet they didn’t for one simple reason - perception. When originally released on the GameBoy, Picross lacked the clean functional almost sterile appearance of its later DS iterations. Instead adorning the packaging and the game’s title screen was the familiar moustachioed face of what was then perceived as a character associated with children's games. The two things really don't marry: Any child interested in playing a Mario game wouldn't be too impressed with the main body of the game, meanwhile any adult that would enjoy the brain taxing puzzles wouldn't have picked up the 'childish’ box off a shop shelf. The original Gameboy version of Picross consequently bombed in Western markets, meaning a later update of the game never found its way from the Super Famicom to the Super Nintendo.

Playing Mario’s Super Picross (Mario no Supa Pikurosu) after years of enjoying the DS games is like trying to eat ice cream with a fork. It's tasty but certain things could be incorporated just to make the process easier and more enjoyable, even if that dulled the challenge. The game is generally the same as other Picross games, only (of course) dressed in Mario's clothes. Turning away from his normal plumbing profession, Nintendo's mascot now had an interest in archaeology. The whole game has an Egyptian aesthetic supporting the notion that ‘Explorer Mario’ is chipping away at ruins to expose (contemporary) images and Japanese symbols. The initial levels are smaller and a lot easier and when solved correctly, the black-and-white representation becomes coloured and animated.  The player must work through levels in order to get access to harder levels, which offer exactly the same game play but with more rows and columns. Divided into two halves the game offers the choice of playing as Mario or Wario. 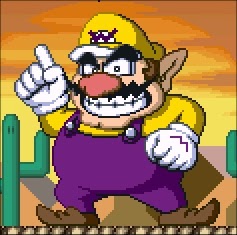 Of course you don’t see the mascot and his evil doppelgänger during game play, just in occasional cut-scenes, so you’re actually choosing a play mode rather than an avatar. Mario’s mode is the traditional one, you’re given time penalties for making mistakes with the amount of time lost doubling for every mistake. In Wario's puzzles, the time counts up and the player is not penalized. This sounds much easier, but that crafty evil yellow suited scoundrel keeps to himself if you make a mistake. Because of this, Wario's puzzles are harder than Mario's, as it takes pure logic to solve them, rather than having the option of deliberately taking a time penalty to test a hunch. This mode is similar to the Free Mode in Picross DS, but obviously as this was the third entry in the series other later introduced series staples (such as the dulling of numbers when a line is completed) aren't present.  Coupled with the console’s puzzles are of course also solved using a clumsy controller rather than the DS’ precise stylus. Neither of these things subtracts from the joy felt solving a particularly large or complex puzzle, they just make the process less intuitive. 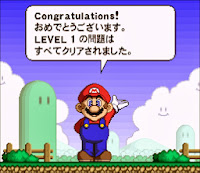 As an un-translated imported game language and cultural barriers cause slight issues but not in the conventional ways.There's very little text and presuming you know Picross in advance skipping the tutorial isn't a problem. What is problematic though is some of the puzzles use Kanji rather than Roman letters, and Japanese icons as oppose to symbols that would be familiar to a European or American player. This is only an issue though if you solve the puzzle by second guessing what the picture you're exposing is- something not necessary considering the number clues around the grid gives you enough help to solve even a 15 x 15 grid.

The biggest problem with Mario’s Super Picross though has nothing to do with the bizarre visual style, the excessively respective music, or the tetchy fumbley controls. Its greatest flaw is entirely down to where you must play the game, sat on a sofa in front of a TV. What the original GameBoy release and the later DS versions of Picross did was provide amusement on a train journey, when unable to sleep at night, when sitting on the toilet. With a TV available why would you opt to play this over a multitude of other games?  The game suits being played on a handheld, and in some ways even having the puzzle blown up to the size of a TV means its more effort to scan your eyes across the puzzle to calculate which blocks can and can’t be removed. It feels like a game that is at odds with its platform. It’s like an NTSC SNES cartridge in a PAL machine, it just doesn’t fit correctly. 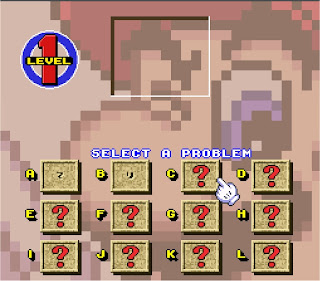 For my purposes Mario no Supa Pikurosu was fine, as I could play on emulation on my laptop using a mouse. As a fan of the nongram logic puzzle, what this game did provide was more brain bending fun, having already exhausted Picross DS and Picross 3D. The manner in which I consumed it however was not how it was intended to be played. I would have much rather have tackled these puzzles using the Picross DS engine, on my Nintendo DS, using a stylus. Developments in the series have lead to much better games, and I miss using a spoon to eat my ice cream. For anyone who has never played Picross, what’s on offer here is enjoyable, but can just be found far better elsewhere.

Where did I buy this?
Like 90% of my imported games, I got this from my buddy in Japan, an ebay seller who goes by the name of Tsunami Games. This was the game I bought at the same time as Pachinko Wars.

At the time I was shocked I got it so cheaply – just £1.49 plus postage. However, thinking about it there’s little demand for it in the UK. Those who want to play the brilliance that is Picross can easily get the superior DS version in Cex. There’s simply no need to go to the effort of getting the inferior Japanese version on a console that doesn’t suit the game as efficiently. It’s still nice to have though. It’s the most obscure SNES Mario game that most have never heard of let alone played.  Mario no Supa Pikurosu therefore is a novelty; fun to talk about but I doubt will ever get played again – certainly not on a TV!


To import games from Japan, eBay isn't your only option. I always check on sites like Solaris Japan as often they have a game in stock cheaper than the final price it goes for on eBay. The also have a few gadget that removes any worry of getting charged extra at customs, so they're worth a look.
Posted by Julian Hill at 1/24/2014