Cartoons lie. If you step off a cliff, you can’t stay afloat until you look down and realise there’s nothing below you. You can’t paint a picture of tunnel in the side of a wall and then run down this drawing as if it were really there. You also can’t get whatever you want on credit from the ACME Corporation without people asking tricky question about what you’re using this dynamite and pulley for. But worse still, the Road Runner himself is a lie. He is probably a Geococcyx bird, one that can run at up to 20 miles an hour for a short period. Meanwhile coyotes are twice as fast as the Road Runner and can run for extended periods.  Should a Road Runner venture into a Coyote’s territory it would not go “meep meep”, it would not stick its tongue out and kick its heals. It would be eaten. Well it would if Coyotes actually ate Road Runners, but sadly there has never been a documented instance of this ever happening.

The cartoon may have got it all very wrong, but fortunately the end result despite failing to understand the inspiration was great- a series of cartoons. They even today continue to make me laugh out loud. Ironically the snes game based on the Road Runner series also failed to understand the very thing that inspired it. The cartoon Road Runner as his name suggests is built for speed. The majority of his time is spent moving at speed bending the laws of physics as he sprints over around and through the coyote’s devious plans. Even from this simple description it's obvious what form a game adaptation should take - a race style perpetual movement style game where speed is the focus and controls allow for quick reactions. A game adaptation should be a shameless rip off of Sonic with the blue hedgehog swapped out and Road Runner replacing him. It should have been like Uni Rally, Sparkster or like Rainbow BellAdventures. A quick glance at screenshots and all appears as it should be, but upon playing it for longer than 5 minutes it’s quickly becomes clear how wrong they got it. 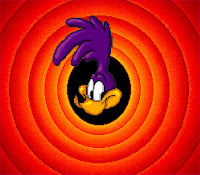 The game starts with so much promise. The rings of the Warner Brothers cartoons welcomes you upon pressing start accompanied by the theme tune that's etched into a mind of anyone who grew up in the 80s watching Saturday afternoon cartoons. As you start a level the horror of the game really isn't apparent, all seems actually quite good. The episode I shall be playing "Zipity Splat" is named onscreen and Road Runner is moving at such a speed he is simply a motion blur. The frantic running freezes for a moment and their names (and humours faux-Latin equivalents) appear above them, the action continues Road Runner meep meeps and Coyote looks confused. So far it's like the cartoon has been

digitised and thrown onto the snes. Everything seems fantastic for a lover of the source material. This section lasts 10 seconds at most - it's the best 10 seconds of the game. As soon as the level starts everything begins to unravel.
It's amazing how forgiving I am to things that look nice. Death Valley Rally does look very pretty indeed, the graphics are certainly the game’s biggest strength. Maybe this is why I've always wanted to play this game, pictures in magazines and the back of the box show something beautiful. Both main characters look exactly as they should, reflective of their TV counterparts and well animated. The worlds they inhabit are full of life and vibrancy,

even including cameos from other Warner Brothers characters and many visual puns. The game's many many problems start to become obvious though when you look at Road Runners sprite as he jumps; his width trebles when compared to his size standing. It becomes really vague which part needs to clear platform edges and platform games require precision and clarity. Road Runner takes the floaty jump seen recently in Little Big Planet and magnifies it. Imagine a low gravity moon

level on any good platform game and you know how the jump in this game feels. Pressing the jump button while moving in a direction and Road Runner launches into an arc that covers the width if the screen. You have to then attempt to line up his huge sprite so it's completely on a platform, a sizeable problem if the platform is smaller than the protagonist.


You don't want to be jumping on any platforms of course, you simply want to be running away from your nemesis. There are few occasions in the cartoon when Road Runner would decide that running away from certain death should be put on hold while he tries to jump up a series of platforms to find a hidden flag that contributes to his score. Even if he did decide this would be a good plan, I'd bet his legs would follow the directions of his brain, there wouldn't be a delay between him deciding to jump and his body actually responding.This lag much like the ridiculous floaty moon jump makes traversing any vertical platforms a nightmare. Even if the subject matter lent itself to a game where level exploration would be thematically appropriate the controls should at least make such activity easy to do. Things get significantly worse when Road Runner dashes - something he should be quite adapt at. Jumping when dashing on any surface other than a flat one, causes random results. Road Runner may leap forward in the direction of travel, vertically upwards or even strangely move back on himself. Even if you do manage to move in the desired direction while dashing, the platform destination is moving at such a speed that it'll already be off screen unless you pre-empted where they will be before you saw them. Use up the limited dash metre in the wrong section and level progression becomes impossible. This then forces you to backtrack and painstakingly explore platforms to find bird seed that recharges it. In a narrative sense this seems madness; youre sending the hero back towards danger - back into the arms of his predictor. The odds are stacked in the Coyotes' favour anyway, as death for Road Runner is everywhere. Enemies and level hazards will kill you in a few hits, and often the only way you know they are there is because the Road Runner is already performing his injured animation. Even knowing where threats are doesn't really help, as the collision detection is vague and imprecise (made worse by the fluctuating sprite size). Dashing through levels will kill some enemies but not others so that doesn't help and your only other form of attack is pecking foe, something that can only be done when completely stationary.

The cumulative effect of all these terrible mechanics is a game that ludicrously hard and painfully unfair. So much so that when reviewing it Super Play had to confess that the screen shots dotted around the pages were from the rolling demo you see if you don't press start. The game is so hard and unplayably broken that they couldn't get off the first episode (at least they were honest about this they add!)

If fate is on your side, if you memorise the entire level layout and if you have time on your side you can progress through the game. Later levels see Road Runner escape the confines of the desert and explore a mine, a circus and eventually space. This may seem varied but regardless of the background change you're doing the same thing on increasingly complex maps that are increasingly harder to navigate.

If you even manage to stick with it long enough you even get to play a section where Road Runner has to move across the carriages of a moving train. We all know my feelings on levels involving trains. Even if this train is more forgiving than others in cartoon inspired platform games it's still a terrible part of what is a pretty terrible game. The music in this stage is particularly awful, although picking one track from a collection of horrible tunes is as hard as most of the levels in the game. The big problem comes from the length of each track and the fact that each level of each episode has the same music repeating every thirty seconds or so. No matter how good the merry melody may be, when it repeats that often it grates. The iconic sound effects of the cartoon may be faithfully replicated, but what good is that if the music has driven you to play the game on mute?
At the end of each episode you have to take on Willie Coyote directly, as he attempts to capture his dinner with ludicrous schemes and contraptions. It's actually quite funny seeing the schematic for each and these sections are the best bits of the game not least because they are the closest to the cartoon. They prove that there are rare glimpses of goodness in this mess of a game. Its when the game actually stays closest to the cartoon that it’s at its best; not just the strong visuals but also in the characterisation of the sarcastic Road Runner. He may not be able to jump properly, may be easily killed by spiders but at least he has two buttons solely devoted to taunting the Coyote.

It's amazing how wrong they got this game, and amazing that it got past the play testing stage at all. Clearly the money was spent by Sunsoft on getting the license to the cartoon, with no money spent on developing an appropriate game around the strengths and skills of the main character. Anyone who likes this game either hasn't played it or is so in love with the source material they can ignore the actual game play. I'm massively disappointed, I desperately wanted it to be great but scratch away the beautiful paint job and what's below is awful. A very attractive misinterpretation of the source material, a failure to even understand what was needed in a Road Runner game.

Where did I get this hideous monstrosity?
What’s worse than owning a bad game? Having it twice.  My first copy was sent by a twitter friend but unboxed. I then sought out a box to put it in and saw the PAL version going cheap. My second copy was bought after only having checked that the first worked. If I had played the game for more than a few seconds, the box I sought would have not been a replacement cover; it would have been an envelope with Return to sender written on it. My internet friend you are brilliant, but this game is not!
Posted by Julian Hill at 10/11/2013