We’ve had walking simulators, but can a passenger simulator capture your imagination?

I sit next to a taxi driver on a journey home from work one day. I’m tapping away at my phone, and the driver seems to be more and more disgruntled that I’m paying him no attention.

“You’re sending a lot of messages there mate” he says, his eyes thankfully fixed on the road.

“I’m writing about something on the Nintendo” I reply, as if it a thing normal people spend their days doing.

“Ah, right” he says stifling a laugh. “My kids play those. You writing about the shooting one, or the digging one?” My taxi driver clearly has a knowledge of video games that doesn’t extend beyond ‘Fortnight’ and ‘Minecraft’.

“Actually it’s a game about humanity’s dependence on memories to define our existence and how recollection of the past can be distorted and manipulated, to suit the present’s need for survival and recovery”. My reply is admittedly filled with a hint of arrogance and condescension but, he did ask what I was writing about!

The taxi driver snorts. “Doesn’t sound like a fun game.”

And that’s where he’s wrong again on two counts. ‘Hitch Hiker’ is incredible, but it isn’t strictly a game. We sit for the rest of the journey in an awkward silence. 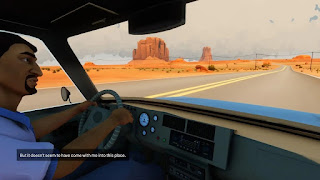 Were you to imagine this situation, you would like have a mental image that isn’t too different from ‘Hitch Hiker’. You play as Copernicus, a young man who, over the course of the game, goes on five car journeys. However, this isn’t a driving game; you are not in control of the vehicle. Instead, developer Mad About Pandas, call it a “passenger game”. “We had been making games about driving a lot” says Patrick Rau, creative director at Mad About Pandas. “I made a game about driving trucks over all of Europe and I was like ‘what can I do with this technology?’” At the game’s start you have no idea why you are in a car, however as the gripping and thought proving narrative unfolds you piece together a back story and in so doing realise where your final destination will be. The developers call this a “Mystery Game”, and while initially ‘Hitch Hiker’ feels quite grounded and realistic, over the course of the five episodes things become increasingly more surreal. Each of the half hour long episodes features a different driver. 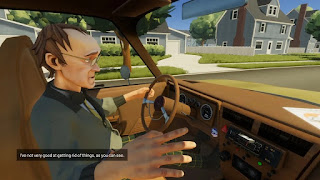 “Your drivers range from stoic farmers to off-duty waitresses, and each one has a story to tell“ says Mad About Pandas. For the most part you’ll be simply talking to them. There is branching dialogue, but unlike a Telltale, Dontnod or Quantic Dreams game, what you say has little effect on the game’s progression. Much like the car journey you take, the starting point and ending of a chapter is fixed. At most, your conversation choices lead to marginally different dialogue exchanges between Copernicus and his driver. Similarly there are some puzzle elements, such as solving riddles heard on the radio, sliding puzzles and finding a sweet spot on a dial but the speed at which you solve these again has no effect on the outcome of an episode. ”We have some puzzles in there to keep the player engaged” admits Rau. ‘Hitch Hiker’ is very much a narrative experience. You are there for the story - you’re there for the ride. 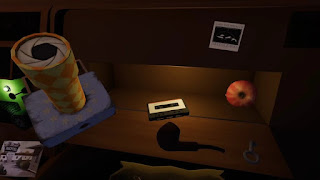 Thankfully the story told is exceptional. Like the best mystery novels to discuss it too much would only detract from the experience for anyone who hasn’t played ‘Hitch Hiker’.  Unconventionally it’s a game that examines the nature of what is true; our longing to find meaning in madness, set against our need to avoid the truth when it hurts. While never being harrowing or too intense, there are moments throughout ‘Hitch Hiker’ that will make your hair stand on end, not because they’re grotesque but simply because they are astute. A subtle change in an environment that puts you on edge, making you wonder if it was there all along and you just never noticed. ‘Hitch Hiker’ is heartfelt and honest, taking on topics that will likely strike a chord with most players. Unusual for a video game, it deals with an exploration of the self and introspection. “There are thriller elements to it, inspired by films by David Lynch” says Rau. “There’s an emotional journey to it”.

However, ‘Hitch Hiker’ isn’t a closed story and there is no obvious narrative climax. I’ve seen some comments online that the game simply ends, without a conclusion. Such criticism feels odd, considering the final chapter explains exactly what’s going on – albeit in a very subtle way.  It’s a thinky game, where the more you engage the richer the reward will be. While Mad About Pandas have an official timeline of events and can explain the conclusion, this is left for the player to piece together outside of the game.  As the credits roll you mentally digest all that’s happened over the last three hours, and the story dots join together.  While it’s a short game, I’d bet anyone that emotionally invests in ‘Hitch Hiker’ will play it again. “The players will have lots of questions after they play the game” says Rau. “We have created a game so the player has their own interpretations of what has happened”. 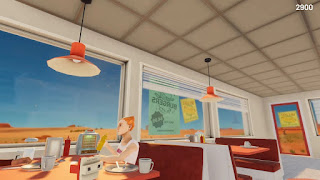 For a game that’s entirely dependent on story, the voice acting has to be superb. In this the game certainly delivers, with stand-out vocal performances from all the five drivers. Motion capture was recorded at Altagram in Berlin, using a number of largely unknown actors. Erik Hansen and Amanda Mahr give particularly good performances, masterfully making their respective characters approachable yet simultaneously creepy and untrustworthy. ‘Hitch Hiker’ doesn’t create fear by making you feel like you’re in a car with a serial killer, instead the game is unnerving because of what it makes you realise about yourself. “Each ride is connected to an emotional state” says Rau “and each ride’s environment reflects that visually”. The bulk of the game is stylised 3D and while you’re stationary in the passenger seat of the car you can look freely around. The visuals while not photo realistic by any stretch of the imagination are effective. Like so much of the game they suggest a great deal without explicitly showing it. Playing ‘Hitch Hiker’ feels like you’re in a dream, where the world around you is familiar yet vague. 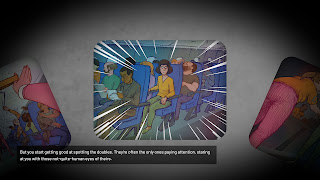 At various points action does take place outside of the car though, in a diner and a mountain top. More crucially, at one point during each chapter the visuals change to 2D animation. The style of these un-interactable cut scenes varies;  with one rotoscoped like a 1980s music video, another echoing Edward Gorey illustrations and a different one viewed as if looking through a Viewfinder toy. The variety of visual presentation is intriguing and keeps ‘Hitch Hiker’ varied, when there is a possibility that the game, as short as it is, would feel more monotonous if it were visually constant.

Mad About Pandas, grandly claim that ‘Hitch Hiker’ offers “five rides with five total strangers who will challenge your grasp on reality… And maybe your philosophy on life”. This isn’t just promotional speil; I did find the game that thought provoking.  The medium of video games is unique in that player participation creates greater immersion. Yes, ‘Hitch Hiker’ is light on game play with a simplistic look but the first person perspective makes you feel central to the evolving story. It’s a story that will play on your mind, and make you question so much. Like, was the taxi driver conversation in the first paragraph of this article real, or simply a made up memory to serve my immediate need.

If you enjoyed this maybe consider a book I co wrote all about point-and-click games. "The Art of Point and Click Adventure Games" can be bought here:

A copy of this game was provide for free to review. The publisher and developer have not seen or had any influence on the content of this article prior to it being posted.