Turtles Lunchbox, Turtle Action Figures, Turtles Videos, Turtles Comics, Turtles T-Shirts. Turtles Fan Club Subscription, Turtles Vinyl Record, Turtles Posters, Turtles Key Rings, Turtles Video Games. In 1989 I was a huge Teenage Mutant Hero Turtles fan, I thought the cartoon was the greatest thing on TV and would watch my VHS recordings over and over again. My friend at the time Chris (who I have not seen for 15 years) and I would even re-enact the shows, dressing up as Raphael and Donatello, fighting imaginary foot soldiers. The Turtles game on the NES was I think the first game I owned
twice on different formats; the glitchy Amiga Version and the rock hard NES version. It may have had a closer resemblance to the original comic than the cartoon (it always angered me that the cover showed the turtles all wearing red masks!) but I would live on that game, even if it had ludicrous difficulty spikes (the underwater bomb diffusing level was notorious for its near impossibility). The problem is when you’re 7 as big a fan as you may be of something, something better always comes along. What was the centre of my world after a few years suddenly became painfully un-cool, and I was almost embarrassed to admit that I liked the turtles so much.  As a result when the SNES game ‘Teenage Mutant Hero Turtles IV: Turtles in Time’ was released in November 1992 I couldn’t care less about it. I had moved onto other TV shows, probably Tiny Toon Adventures  and these fancy new Japanese  cartoons called Anime. It’s a shame I never played this game as a youngster, as its by far the best Turtles game you could buy. Unlike the NES game I knew so well, platforming has gone and instead the game takes the form of a scrolling brawler clone.


Starting the game up is a memory filled joy. The theme tune I once knew so well fills my ears, and how wonderful it is to hear the phrase “cowabunga” said without irony. As a Konami game it really goes without saying that it sounds great, with brilliant music throughout and humorous sampled speech. It also looks nice; clean crisp sprites, smooth animation and thematically varied environments. Each stage is peppered with environmental hazards, some like the road cones can be used as weapons others are there just to cause an obstruction such as the wrecking balls. Even the way enemies appear varies between levels, sometimes leaping from the foreground, sometimes climbing out of sewers, other times even climbing over things into the screen. There’s lots of nice visual touches that are there to just enrich the environments. However despite the variety and diversity of each stage, the same enemies populate the entire game (even though there logically should be no foot clan in 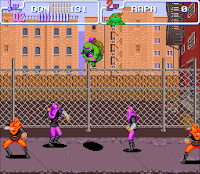 prehistoric times). Despite the designer’s best efforts, the key problem that plagues all scrolling brawlers remains; once you’ve played the first level you’ve essentially experienced the majority of what the game has to offer. There clearly is a conscious effort for the SNES’s Mode 7 effects to be used to add the much needed variety that the genre lack. However, this visual trickery though has very mixed effects. When it works its great, the F Zero alike racing stage, 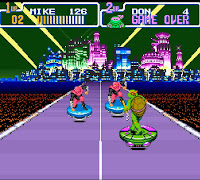 though short and simplistic is a welcome respite from the scrolling fighting.  All other uses of Mode 7 though feel rather ostentatiously gimmicky and actually hamper the player’s enjoyment. Much love has been heaped on the way enemies can be launched towards the player point of view sometimes even hitting the glass of the TV. This may look clever and fancy initially, but in reality as the enemy fills the screen the player’s view of the action becomes limited. This essentially makes the move one you hope to avoid as it’s harder to control a character you can’t see. Similarly the level 3 fight with Shredder suffers from the same problem of design limiting enjoyment. It may seem a good idea to see from over the shoulder of your arch enemy, but when he blocks the player’s view of half the game space things become less fun.

Further short comings of the game, are generic problems that I have with scrolling fighters rather than this game specifically. Button bashing is only fun for so long, when enemies attack you from both sides at once there’s little you can do. Without sprite scaling it’s often hard to get a sense of the physical space that things inhabit and being sent to the start of the level after using a continue is irritating. Some of these problems evaporate in two player mode which is perhaps how the game was designed to be played but on your own I doubt you would choose to play this multiple time especially if you own the far superior Final Fight or Batman Returns. 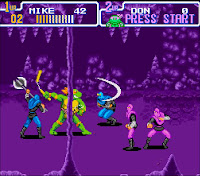 The game may be short usually taking half an hour to play through, but by the end my fingers were tired of hammering the same button. I was bored of repeating the same actions against the same enemies. There’s limited replay appeal too, as apart from the cosmetic changes all Turtles play near identically, with only minor variations in speed, reach, health and special move. Difficulty changes effect just how much damage opponents can take, which only marginally elongates the game length.

It’s not a bad game at all and I imagine that enjoyment is magnified in multiplayer. But sadly it does fall victim to the rapid inflation of boxed complete SNES game prices. There’s a hideously ugly 3D re-imagining on PSN and X-Box Live which is £8. 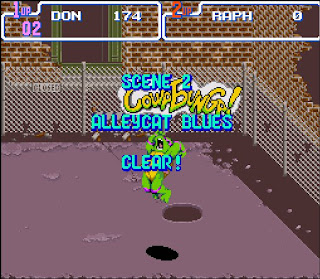 This for me is all you should pay for such a limited and repetitive game. With CIB Super Nintendo copies reaching £60 on eBay, I can’t help but think that (taking nostalgia out) the game now feels shallow and most will expect more varied content for the price.  On emulation though, I’m sure it will provide half an hour of fun, especially for former Turtle addicts or fans of the genre.

In my blog post for Super Probotector you may recall I talked of a friend of mine who runs an indie game shop in Norwich called Regenrating Gaming. In addition to that run and gun shooter he sold me his original copy of this game and as before the price I paid was much less than the going rate on eBay.

If you’re ever in Norwich I would encourage you to visit Regenerating Gaming – home to a great selection of games and a great guy who like me once loved the heroes in a half shell.  I should pop back one day and play it in Co-Op.
Posted by Julian Hill at 8/30/2013

Email ThisBlogThis!Share to TwitterShare to FacebookShare to Pinterest
Labels: Beat Em Up, SNES