Times were simpler once. You could sit in front of a game, pick up a joypad and have a go. When did things get so complicated? When did the world decide that more is best, that complexity equates to depth. Now I'm all for things being value for money, I want my game to have enough to justify the price of admission. But there needs to be a balance, sometimes more is just scary.

For example I've always been a bit of a fan of Street Fighter 2. The series as a whole has been something I've always wanted to get back into as I love the lore and the aesthetics of the modern games. In a recent sale on PSN I saw the Vita version of ‘Street Fighter X Tekken’ for £13. I wrestled with the fact it wouldn't have a box, would probably be free on PS+ in a month but still thought for that price I'd give it a go. I also liked Tekken and understood that this was built around the Street Fighter IV engine so it would be a perfect little game to fill a few minutes on the train I thought. Starting it up and you're quickly thrust into a training mode, with series ‘figure of fun’ Dan Hibiki teaching you "the basics". By "basics" I clearly mean: Launches, Cross Rushes, Super Moves, Super Charges, Cross Cancels, Switch Cancels, Super Arts, Cross Arts, Charge Assaults, Gem boosting, Pandora, Guard Damage, Tag defense, Combination Parings and Throw Reversals. It was an experience that I can best compare to opening up a door and walking straight 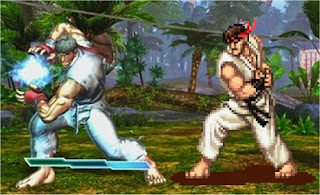 into a wall. Even though I completed this training stage, by the time I got past the equally intimidating character select screen I'd forgotten it all, reverting back to just the kicks, punches and quarter circle specials  I'd known in my youth. Though I enjoyed playing SFxT, it was all a bit much. I really felt like I wasn't getting the most out of the game as I simply didn’t understand everything that had been added to the series since I last played it. I needed to go back to basics and the best way to do this was to return to the game where it all began; Street Fighter 2. 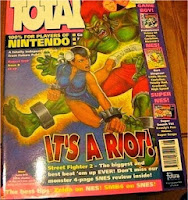 I'd never played the first in the series (who has let’s be honest) and somehow the third passed me by. But the second Street Fighter game, that was something special. I remember first seeing it in an arcade in a Holiday camp in the south of France. Every day I would just go in there and watch the demo on repeat. It was at the same time as the game was about to be released on the SNES, as I remember the Total! Magazine I took with me on holiday having a huge review on the game. (That very same issue also had a free pair on sunglasses, that I insisted on wearing even though they were an adult size and looked ridiculous.) I remember how thrilled I was when I got it for Christmas, having convinced myself that it was globally out of stock and impossible to buy. My Mums reaction to the game I had so desperately wanted was less enthusiastic than I'd hoped "Is all you do fight?" she asked. Yes Mum, the clue is in the title, but that was the brilliance of it.

What my Mum had failed to predict in her 5 word review was the change this game would cause. She’s right Street Fighter 2 does look like a simple fighting game which has you fighting one on one with opponents. But what lies beneath that is a lot more complex and significant. The game was one of the absolute defining titles of the 90s, and did more to influence the fighting genre than any other release before or since. 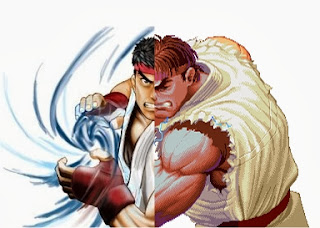 Compared to modern brawlers it’s a simple and accessible thing.  You didn't have focus bars, or cross gauges, you had just one life bar that you hoped would decrease slower than your opponents. A diverse range of characters all which not only had different moves but actually felt different to play. Enough to add variety but not so many that it was intimidating. It often forgotten that what made Street Fighter 2 so unique in the first place was the ability to choose whom you played, a total revolution at the time. Prior to this (and as was the case in Street Fighter 1) players always played a hero character, taking on opponents sequentially . Now it seems crazy that ‘selecting a character’ was such a genre revelation, why wouldn’t you be able to play as the other fighters, all their moves and sprites were there after all?  This new invention added depth and the replay ability; you didn’t need a bewildering range of gauges and charge meters. It took time to learn each character, rather than your time being spent learning the complex game mechanisms. It was time I was happy to invest and I remember the same Christmas that I got the game I also got a magazine with an hour longVHS discussing tactics and moves for each fighter. I watched it till it literally wore out.

Returning to the game now (though I have opted for Super Street Fighter 2 as I don't like the idea of not having Cammy on the roster) it's surprising how confident it all feels. There's no forced training to do prior to a first match, just a selection of character. The opponents start off so slow and unresponsive that you learn the various moves and specials through play, rather than through preparation beforehand. Much was made of the Super Nintendo’s Street Fighter 2 port and looking at it now it’s hard to believe it’s as old as it is. With the modern fighting genre resurgence favouring a 2D plain of combat the visuals still feel modern and relevant. Large well animated sprites, fun detailed but not distracting backgrounds. In retrospect it's apparent how trend setting and genre defining the game was. So much of the game was copied by the many fighting games that followed it, in a way the archetype ends up feeling stereotypical. With the exception of Ryu and Ken each pugilist is varied and original even if they are horrific racist caricatures. With few exceptions they all have also been copied and mimicked in every fighting game since emphasising the impact this game had. Beyond the character types the game play shift away from basic kicks and punches to a focus on character specific moves is something that originated with Street Fighter but was only really perfected in its sequel . Likewise stringing moves together to form combination attacks also was something pioneered by Street Fighter 2, although it was apparently an accidental invention only celebrated in this Super iteration of the game.


With so much going on visually it's a wonder the Snes keeps up, with very little noticeable slow down. It's not surprising that this game was the trump card for playground console wars, the mega drive version couldn't match its arcade fidelity or smooth colourful look. Likewise the Super Nintendo's superior sound processing power is clear for all to hear, throwing out some of the most memorable and well orchestrated tunes from 16bit era. Due to the fact that the Mega Drive and the original arcade machine both had similar sound chips the music could be downgraded and directly transferred relatively easily from one to the other. Meanwhile for the Snes version the developers had to recreate the music from the arcades from scratch optimising it for the platform and adding to the quality and richness of the sound.


When non console owning friends would come around Street Fighter 2 would be the game that most would want to play. In the 90s when I went to parties there were three games that would come out without fail Bomber Man, Mario Kart and this; everyone knew in versus mode Street Fighter 2 was a fun thing to play. Problem is I was and still am a bit rubbish, and would often literally get beaten at my own game by people button bashing with Chun Li. One player mode became something I’d play to get better for when friends came round. It's lucky because looking back at it now the narrative of Street Fighter 2 is rubbish. Although it’s great to get straight to the action in retrospect this comes at the cost of story. Unless you read the manual, it’s not until beating M Bison that you actually know why your character has entered the tournament and even then the reason is often either convoluted or ridiculous. But really who plays fighting games for narrative? Well, me actually when I have no one else to play with. Maybe this is why Street Fighter X Tekken has so many characters to dabble with, so many movies to unlock and so many plot threads to laugh at. It gives a solo player something to work at, something to do when no one wants to play with them. Evidently the Street Fighter game I want is a fusion of old and new. The complexity of current 2D fighters may be great for tournaments buts it’s just too 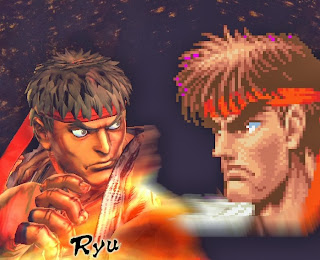 much for a casual player. All these games need is one bar - a character’s energy. Having said that I would love to retain the narrative of SFxT; as silly as it may be, I do like to be told a story. Character roster in my ideal world would be closer to 16 than 32, as it’s enough to add variety but not so many it's a daunting task just finding the player you want on the select screen.

It feels like there is the assumption that anyone interested in playing a modern fighting series would have already spent countless hours getting to know the previous iteration intimately. Consequently, there is a need for developers to inject a new mechanic or gimmick with each release to keep the established audience on their toes. This of course makes sense, but it also prevents anyone unfamiliar with every series entry from being able to join or rejoin the franchise.

Maybe the best thing for me would be to watch the cut-scenes from modern games on YouTube and stick with the simpler older but equally attractive sibling. Maybe eventually I’ll be able to progress to the next game in the series, and the next until I reach the latest game. It'll take years of course, but that's ok. It's not as if they release yearly updates or anything.


Where did I get this from?


It’s amazing I’m so rubbish at Street Fighter 2, because I’ve bought it so many times in various forms. To date I’ve owned it twice on the SNES, on the GBA, on a various PS2 collections and as a HD update on the PS3. It’s always nice to see a SNES copy on the shelf, even if the box art for all the PAL Street Fighter 2 games is universally awful. It’s simply a case of waiting for the right priced copy in the right condition to come up on ebay, with Super always proving to be the most expensive. Like me people seem to be happy to pay more just to stare at Cammy.
Posted by Julian Hill at 11/15/2013