Calling a game 'Lady Stalker' could conjures up many an inappropriate image, but was the name the only reason the game didn't see a western release?


During this time of increased interest in perverse video games it's hardly surprising that a game called 'Lady Stalker' would come to the super Famicom. As it wasn’t localised for the west, many (myself included) saw the title and feared the worse, especially as it was developed by a company called Climax Entertainment. But to my surprise and delight it wasn't the game I expected. Evidently the name was never intended to be salacious, it was simply factual. You play as a character called Lady who stalks the land looking for treasure. Rather than preying on women, you play as one. It's an unfortunate title that would certainly have been changed if the game were localised. 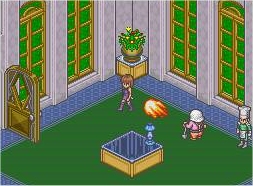 Lady is a woman born into wealth. Despite a longing for adventure she is imprisoned in the family mansion by her tutor Yoshio and the family chef Cocks. We join the story when a house fire caused by Yoshio allows Lady to escape. As she flees our protagonist heads towards Deathland Island; convinced that here she will find the adventure she has spent her life yearning.


The game is actually a sequel to the Mega Drive games 'Land Stalker'. It's an isometric RPG similar to 'Equinox' and 'Solstice' but without the heavy puzzle focus and frustrating gameplay. Combat is triggered by Random encounters like a traditional Turn based JRPG and combat is all done in real time, similar to 'Secret if Mana'. However 'Lady Stalker' lacks the depth of this celebrated masterpiece. Battles seem to mainly consist of swinging a sword until everything is dead. The player can use a standard or charged attack and both deal more damage if the player attacks the sides or backs of the enemy. With this being an RPG, experience points and money are handed to the player upon victory.


For the early part of the game Lady is on her own and defeat in battle means Yoshio and Cocks will take her back to the charred remains of the family home. 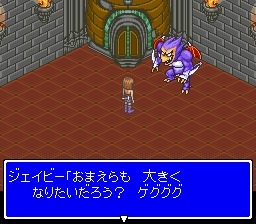 However, as the player progresses eventually the antagonists will join Lady in battle, united to fight a bigger foe. An enlarged party does little to affect gameplay though as Lady remains the only character the player gets to control. Your new allies simply use magic from the sidelines with the tutor attacking with fire and the Cook healing.


As is the tradition in the RPG genre, if too much damage is taken the player needs to head to a church to heal. These can be found scattered throughout the game, typically next to an inn which can naturally be used to save. Villages also present the opportunity to buy weapons and armour but it's a convoluted process especially when you can't read the text. This isn't necessarily a fault in the game but words rather than icons make 'Lady Stalker' very inaccessible to a Westerner. 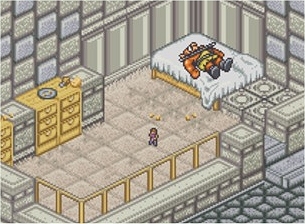 While there isn't the sweeping plot of a game like 'Final Fantasy VI' there does seem to be more text than needed. Menus are awash with Kanji to the point where a non-Japanese reader has little hope of being able to equip items. Indeed I only understand the basic plot from reading translations online and have no idea why Yoshio and Cocks suddenly decide to help Lady when they seem so keen to keep her locked away at the start of the game. Until the fan translation community turns their collective heads to this game, for anyone outside Japan it's largely inaccessible. Given that it's not been done by now suggests it never will be.


It's a shame as the game looks quite attractive. The choice of an isometric view would remind most people of 'Final Fantasy Tactics', 'Super Mario RPG' or of course the prequel 'Land Stalker'. The main sprite is Colourful and quite detailed but 'Lady Stalker' does suffer from the same problems that blight the other games that chose this perspective. Some paths can't be seen as they are obstructed by foreground objects and 'Lady Stalker' also lacks diagonal movement which makes navigation around the screen difficult. The game never seems to know if an Up input on the controller should make Lady move North East or North West across the map. In my two hours spent struggling with the game I continually battled with the controls and had to hold the controller at a bizarre angle to progress as far as I did. Thankfully the jumping that destroyed 'Land Stalker' has been completely removed as presumably negative opinion made Climax realise its folly. The prequel would possibly be celebrated as the greatest Mega Drive RPG was there no platforming elements. Depth and platform position within the game world was impossible to judge as nothing gave shadows and there was no scaling. This lead to a frustrating experience where you couldn't progress in the game without battling through near impossible jumping sections.


While I can claim 'Lady Stalker' is better for being a straighter RPG, Clearly it's impossible to offer much objective opinion on a game where I managed to play so little. Indeed 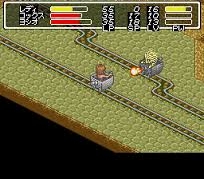 there's an infamous YouTube video where many of the 12,000 viewers criticise the reviewer for giving a score to 'Lady Stalker' after just watching the introduction. That being said this opening video does show some game scenes that look quite good fun. Apparently the game can be finished in 12 hours which is rather short for an RPG but in that time you'll ride in mine carts, shrink in size and climbing inside an enemy's body.


It's likely that many people owning 'Lady Stalker' will have bought it based on the title. However, if you can read the Japanese potentially it is the game that 'Land Stalker' always should have been. An entry level RPG with an accessible simple and inoffensive story. There appears to be some depth through item management even if the lack of party management suggests it can't compete with most of Square Soft’s output. 'Land Stalker' left me disappointed because it was a great game ruined by a poor design choice. 'Lady Stalker' disappointed me owing to a lack of English language options. I do wonder if others were disappointed for other reasons. Japan is undeniably a country that caters for those were more perverse taste, but 'Lady Stalker' is not an example of this.


A few years ago a very generous French reader contacted me saying he wished to send me some of his duplicate Super Famicom games for free. “I know you like the strange Japanese games” he wrote, “so you[‘ll] be pleased with these”. 'Lady Stalker' has sat on my shelf all this time as I knew I wouldn't be able to progress to far in it. After trying 'Land Stalker' I thought it worth the try.
Posted by Julian Hill at 7/21/2017