Critics and players may have loved 'Magical Quest' but its was frequently criticed for being too easy and too short. Why should you play the sequel to this platformer when its even easier and shorter?

The video games industry struggles with length, it has yet to determine how long a game is meant to be. In film you’ve got a rough ballpark: ninety minutes if you can keep things tight, three hours if you’re stretching things out. A music album will amuse you for about an hour. TV shows typically have two rough lengths; an hour or half of that. Even then the exact amount of content depends on how many adverts are to going to be shown.  However the main story component of a game seems to have no universally accepted length. Arty games like 'Journey' and 'Everybody's Gone to the Rapture' last a couple of hours and the campaign mode of many first person shooter games feels like an afterthought, sometimes failing to reach an hour. 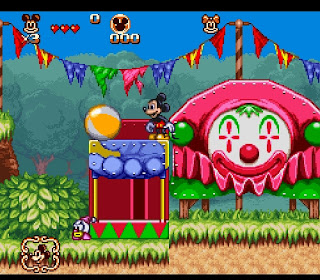 For most, the story sweet spot seems to be between 10 and 20 hours.  However, we lavish attention on people finding ways to beat a title in a quickly in a speed-run. Conversely, Role-playing games use their length as a sort of qualitative yardstick. Fifty hours seems to be an unofficial bar to clear, but some stretch on for multiples of that. 'Persona 5' takes at least 80 hours just to finish the main story and you can easily treble that  if you're a  player that is obsessed with seeing everything that's on offer. Buying video games, particularly retro titles, can be an expensive hobby and we understandably want to get our money's worth. But when we have no idea how long a game should last, how do we quantify value for money?

With this all in mind, the criticism that a game's too short is in reality back handed praise. The reviewer is essentially saying the game was enjoyable while it lasted and the experience was over sooner than they would have liked. It was something many reviewers said when looking at the Mickey Mouse Snes platformer 'Magical Quest'. According to Capcom the Super NES version sold 1.2 million copies worldwide, so a sequel was inevitable. The follow up, 'The Great Circus Mystery starring Mickey & Minnie’ has built on its predecessor, but while it's certainly the better game it's also even shorter than the "blink and you'll miss it" 'Magical Quest'.

'The Great Circus Mystery starring Mickey & Minnie’ is unmistakably and unashamedly a sequel, but this is a very good thing in this situation. The core building blocks of the first game have remained but the gameplay and levels have been changed sufficiently so that 'The Great Circus Mystery' feels fresh and original. It's an entirely new adventure with different set pieces but one that'll be comfortably familiar to anyone who has played the prequel. 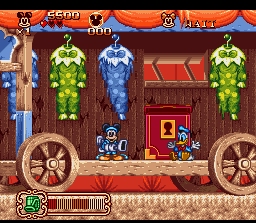 'Magical Quest' saw Mickey Mouse searching for his lost dog Pluto, whom had been dog napped by a sadistic scientist. On his journey Disney's mascot mouse met several friends who each gave him a new suit to wear.  Each new suit grated new abilities. Later levels therefore demanded that the player switch between different outfits to solve puzzles and pass level hazards. In this follow up the Magician, Fireman and Abseiling outfits are out and Mickey is given new clothes to wear throughout his adventure. These are entirely new, offering new skills for new challenges and I do really like this approach to a sequel. It would have been easy enough for Capcom to just add one new garment to the three options in the previous game; that's certainly the minimal approach usually taken.

Super Play magazine however didn't believe that the same game engine with new costumes and new level designs was enough to constitute a full price release. "Capcom expect people to shell out for another £50-£60 worth [on a] new cart that amounts to the equivalent of an only slightly glorified data disk. The gameplay is the same." 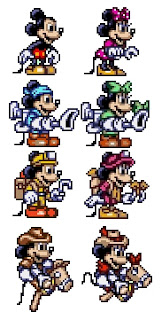 Like the first game, Mickey’s default clothing allows him to grab some types of objects, including some enemies, and spin-throw them.  In 'The Great Circus Mystery’, the first additional set of clothes he can collect is the sweeper outfit, which allows Mickey to suck up some types of enemies with a vacuum cleaner.  With a limited battery the suit will be familiar to anyone who has played 'Luigi's Mansion' especially when foes become coins when ejected from the back of the machine. Nintendo were clearly taking notes when they played 'The Great Circus Mystery’. The second outfit, the safari suit, allows Mickey to scale vertical walls as well as swinging from special kinds of circle blocks. More inspired is the Western outfit simply because it's see Mickey riding a hobby horse. Surprisingly it also arms Disney's famously pacifist with a pop-gun, which damages enemies by firing corks at them. The Western outfit is by far the most versatile since it allows the player to jump higher and also offers the Desperado Dash move. 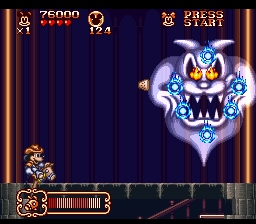 Given that it improves Mickey's jump and attack you’ll no doubt use the Western attire almost exclusively once you obtain it. However at various points in the game a you'll have to change clothes to overcome a puzzle. The game makes this pretty explicit though; if you see lots of hooks you should be dressed for a safari for example. Compared to the first game, the bosses in The Great Circus Mystery' are less inspired. Everyone is killed by jumping on a weak spot and the creativity seen in 'Magical Quest's fire or snake bosses are sadly absent in this sequel. "Patterns tend to emerge very quickly for disposing of bosses" said Mean Machines magazine. While you can use the different outfits to dull their attacks for the most part Mickey can beat them without needing to make the effort. 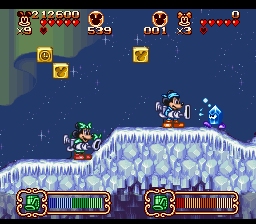 The levels settings will also be familiar to anyone who has played a platform game before, all the generic standards are here. Super Play magazine even suggested the stages are too familiar for anyone aware of the prequel. "There are six levels all themed - haunted house, forest (told you it was familiar) mountings (yeah?) an icy World, you know the sort of thing [...] It's too similar to the first game." Edge magazine also felt the level locations were "amazingly uninspired". "It's all very formulaic" agreed Mean Machines magazine "very much a retread of 'Magical Quest'. However I'd say that ‘The Great Circus Mystery' has more creative stages than its predecessor; they are certainly less linear. That being said the platform action in 'World of Illusion' and 'Mickey Mania' is far more diverse and surprising. 'The Great Circus Mystery starring Mickey & Minnie’ tends to stick to its core mechanics, which thankfully all work really well, even if this does mean the game becomes tiresome when played from start to finish in a single sitting.

While the levels may be familiar to players of the ‘MagicalQuest' series, one massive addition really elevates 'Mickey’s Circus' over the prequel. While the first game had a two player option that had partners taking it in turns to play, this sequel brings simulations play. It was a feature that critics felt was notably absent in 'Magical Quest' and now while one player controls Mickey at the same time another can control his wife. 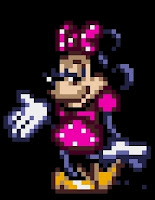 According to Next Generation magazine this was the first time Minnie Mouse was playable in a video game and while the two mice play identically, my daughters certainly think a game becomes infinitely better when your playable sprite has a bow in her hair. It's all just perception though. 'World of Illusion' may have offered different levels and bosses tailored to two player play, but 'The Great Circus Mystery starring Mickey & Minnie’ is identical no matter how many are holding joy pads.

Naturally the game can be finished single player, so with the help of a friend the game halves in difficulty. In 'Magical Quest' a player death would mean being taken back to a continue point. However this would be irritating for a surviving player in 'The Great Circus Mystery’; no one wants their play interpreted due to the mistakes of a fellow player. As a result when you lose a life in this sequel you simply reappear exactly where you died, you're even invincible for a short period. With more lives than you'll ever need death seems to have no consequence other than an arbitrary number at the top of the screen changing. This makes an already easy game even easier. In fact it seems almost impossible not to complete the game (especially with infinite continues). 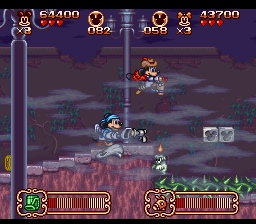 With wonderful graphics and catchy music, critics of 'Magical Quest' drew attention to the game's brevity, lack of challenge and lack of two player options. By addressing the latter Capcom has exacerbated the former. With two playing 'The Great Circus Mystery' becomes ever easier and consequently shorter than its "too short" prequel.  Now it's even more obvious that any long term challenge comes from a disciplined player imposing their own restrictions. "Near saving graces are provided in shape the graphics and gameplay which are both on par with the first game" noted reviewer Tony Mott. "There is no doubt that they'll provide no small amount of pleasure during the few hours which it takes to play the game from start to finish".

While magazines at the time were quick to criticise 'The Great Circus Mystery starring Mickey & Minnie’ we mustn't forget who was the likely target audience - children. Disney is a family focused company so the games they lend their brands to should be accessible to young and old. My daughters thoroughly enjoyed 'The Great Circus Mystery’ and that was certainly down to the fact they easily progressed through the game and could play together. It may not represent the best value for money but if I'm honest I'm glad 'The Great Circus Mystery starring Mickey & Minnie’  is easy and short. Those are two ingredients that make the game wonderful for Disney loving children still learning their way around a control pad.


While ‘Magical Quest’ is well known, few seem to be even aware it had two sequels. 'The Great Circus Mystery starring Mickey & Minnie’ did not shift large numbers, so the number of copies in the hands of the public, are few. Scarcity drives up price, but I managed to get 'The Great Circus Mystery’ cheaper buying the American copy from ebay France. I’ve only seen it in my local Retro Game shop once, and I’ve kicked myself for not grabbing it at the time.
Posted by Julian Hill at 4/27/2018