Developed By Maxis/ Nintendo EAD
Published By Nintendo
Released in 1991.

It's an event that only occurred in a fantasy but just imagine for a moment the conversation Will Wright and Shingaru Miyamoto would have had if they bumped into each other in a lift in the mid nineties.

"Oh Mr Miyamoto how do you do it? My games are so serious and dry, people just don't think they're fun or accessible" Will Wright would have said.

"But people only think my games are for children" Miyamoto may have replied, through a translator that was also in this fictitious lift. "Did you know Will, the Super Nintendo is about to come out. We really could do with a launch game that'll appeal to adults."

"I have just the thing Miyamoto-San. My friends think my 'Sim City' game is pretty good, but only once they have actually sat down and played it. Until they pick up a mouse most think it's a bit boring, can you help?" 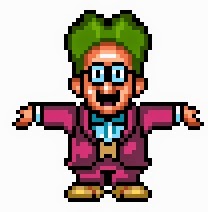 "That's a great idea" Miyamoto would reply, clapping his hands like an over excited Japanese anime school girl. "My team will take your game, sprinkle some Nintendo magic over it and make it something everyone will think is cute and fun."

"You've got yourself a deal. Just one condition; can you name a game character after me?"


Without such a meeting of two great creative minds you really have wonder how the Super Nintendo version of 'Sim City' ever came into existence, especially as a launch title. It was a clear statement of intent from Nintendo; "this is our new Super console and on it will be games for Adults and Children".  Maybe it was hoped that Children could sit down with their new console during the day and play 'Super Mario World'. Then once they've gone to bed the parents can boot up 'Sim City' and pretend to be town planners.

Evidently planning a town from the ground up is a rather tricky business, even though the game starts off simply enough. There are three basic building blocks that make up a Simulate city; residential, industrial and commercial. A winning city will strike a balance between the three, after all there's no point having lots of houses if the residents have nowhere to work and nowhere to buy living essentials. Put the residential zones to close to the industrial factories though, and the city’s population will complain there's too much pollution, too far away and there will be unhappy with long work commutes. 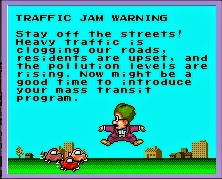 Then of course they need electricity, but what power station will you, the mayor, go for? Coal is cheaper, but dirtier and more polluting. Nuclear is more expensive but with it comes the risk of nuclear meltdown. Then to decide on the number of police and fire stations, too few and your city will be considered unsafe and people will leave. Too many and their costs will drain the treasury limiting the amount of cash for further development.

Town planning in 'Sim City' really is just a succession of tricky choices and getting things right from the outset is essential. In fact the early decisions are far more important than those taken later on. They dictate the city's social makeup and structure, things that once established are hard to alter. Success in the long term depends on a player taking a long view, working out what works best for the city's population at that moment but not making rash decisions that inhibit later expansion. Growth of your city will critically depend on tax rates, since you do not build on any of your designated zones, your populace does. 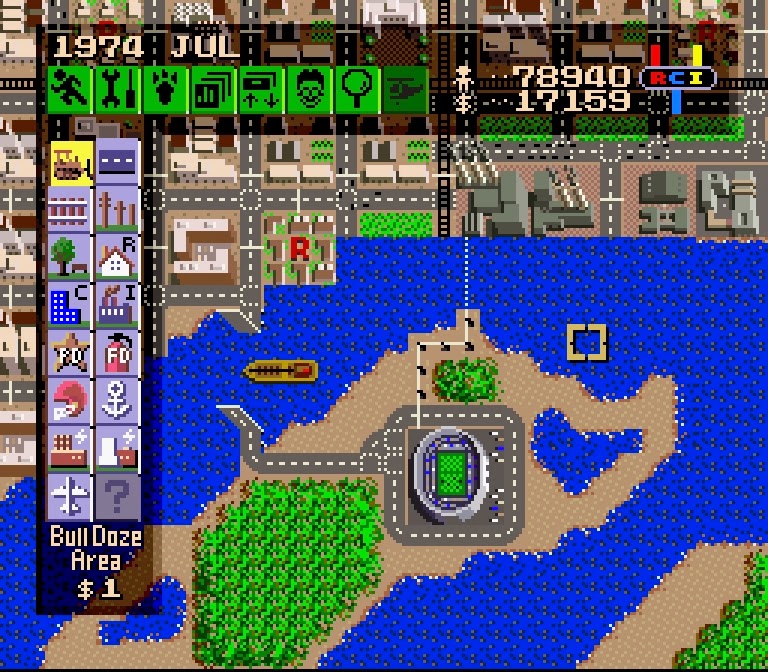 The game's biggest challenges are therefore to find the best purpose for each piece of land, to keep people coming and most importantly to convince them to pay the amount of taxes you're demanding. Tax payments are after all the only income you get to maintain and expand your city. Building you city is really just the start. As your village becomes a town, a city, a metropolis the considerations mount. Before long the plethora of decisions you must make as a mayor all have bigger consequences. For example, expanding commercial areas increases the number of people coming to the residential zones but that also increased traffic density. Build more roads to solve this problem and the environment is affected. All of this costs money of course, but tax too much to bring in the finances and everyone will leave anyway.

While there are dozens of things to keep your eyes on, it’s a slow paced game.  Money only comes in once per year, which means you often you can see an emerging problem but no ready cash to solve it. The reality is that you can often find yourself frustratingly sitting around with nothing to do and no real way to grow or improve your city.

‘Sim City’ is all about commerce, taxation and risk assessment. How on Earth did Nintendo turn these complex "boring" ideas, into a game that attracted over a million sales? Clearly they did something right, because If the box is to be believed "players just can't get enough of the fantastic feeling that governing a unique city provides. The greatest simulation game on the Super NES." 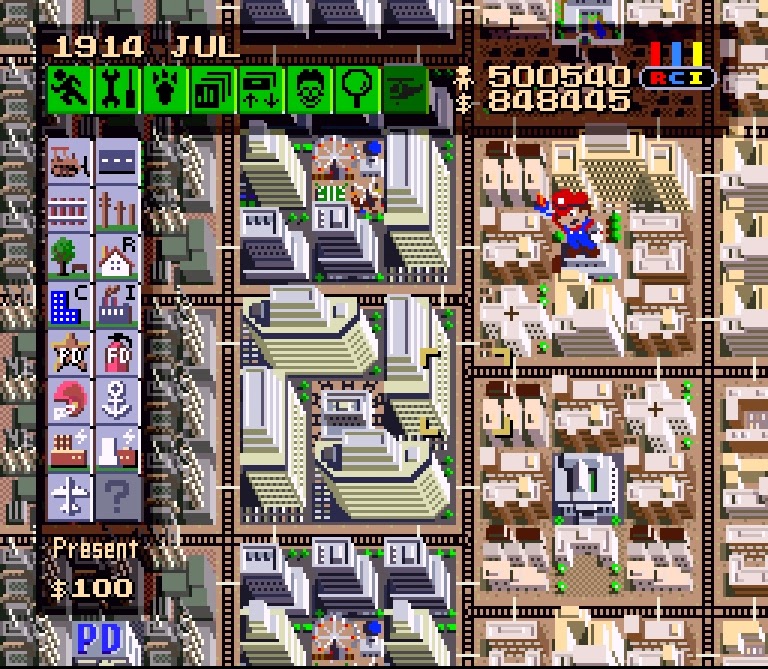 The fact you move a mouse pointer around the screen immediately betrays the game's origins as a non-native Snes game. The system launched without the mouse peripheral being available and as such it is not compatible with the game. Consequently, the only option the designers had was to allow the player to manipulate this cursor using Snes controller and its 8 button d-pad configuration. It's not a very elegant solution but it does work, and at least the controller’s face buttons act as short cuts to the most often used functions. Bizarrely though, given that this game was one of the first to be released on the Super Nintendo, the universal rules governing what each controller button typically should do had not been established. “X” the normal short cut for “confirm”, is actually a “back” button, which may sound insignificant but in practice this gets very annoying.

The PC version of ‘Sim City’ is famously open ended and the years will progress with no end in sight. However, the Snes version can probably considered complete once you unlock the Mario statue, something you are awarded when a city’s population exceed half a million.  However, to achieve that high population you're going to have to systematically cover every inch of the map and every building would have to be placed to ensure maximum population potential. 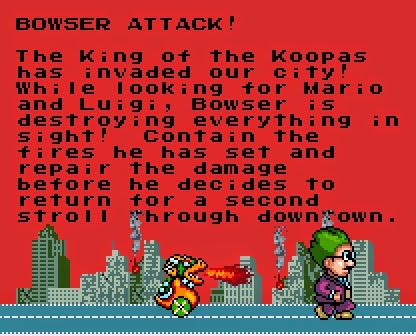 Completing the game actually feels like a chore rather than exercise in creativity. If measured success is your goal, you’d be far better suited to taking on one of the game’s scenarios. Like the home computer version, the Snes iteration of ‘Sim City’ presents you with the option of solving a pre-made city's problem in an allotted time. Typically these scenarios revolve around some sort a disaster like a nuclear meltdown or flooding, or exclusively to the Super Nintendo version, a Bowser attack on the streets of Japan. Some are even based around real-life disasters that actually happened, such as the San Francisco earthquake of 1906. The scenarios present a way to dip into a play ‘Sim City’ in a shorter dose and they present quite a fun challenge for even the most experienced mayor.

The graphics are fairly basic but they're able to convey what you need to, even if the buildings in the Super Nintendo’s release resemble Japanese buildings more so than the western looking buildings in the other releases. But this all contributes to the “Nintendo feel” Snes ‘Sim City’ has. It’s a feeling that’s encouraged by the jazz inspired, but catchy, background music that is un-avoidably always repeating. Though he can get annoying, Dr Wright, the advisor also wouldn’t feel out of place in the Mario universe, filling stat and information screens with his bizarre antics and overly expressive emotion. 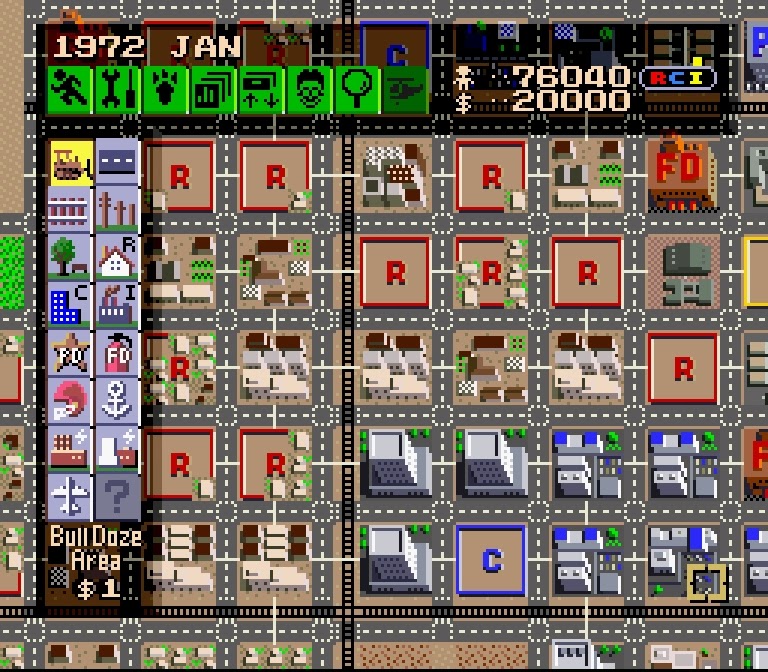 Do these audio, cosmetic and interface changes contribute much to a ‘Sim City’ experience? Not really. Generally of course, 'SimCity' is 'SimCity' no matter what platform you play it in. The rules are the same, and the general procedure to get things done is the same. There’s no denying ‘Sim City’ sold well, but it hardly seems likely that this was because of Nintendo’s minor tweeks. As the Snes launched with only a handful of games, the more cynical may argue that the game’s popularity was solely because Snes customers had few alternative titles to buy. What is more likely though, is that this game sold well simply because it’s simply a good game. In fact Andy Dyer said in a review for Total! magazine that ‘Sim City’ on the Snes “is one of the best games that there’s ever been in the entire history of the World. Utterly, utterly brilliant, a true video game classic”.

So after their fictitious meeting in the lift, what did Miyamoto have to do to make Will Wright’s game sell well on the Super Nintendo? Nothing. All he had to do was make it possible for people to buy. It isn’t a game for those looking for a quick blast of adrenalin and it isn’t a game that in any way shows off the Super Nintendo’s capabilities. In this way it probably wasn’t a good choice for launch title. What ‘Sim City’ did do though, was prove that there was a market for more thoughtful games on the Snes. Considering this was one of the first games available, its success perhaps set the foundations for later, more mature titles appearing on the Snes.  Maybe it was for the best that two industry celebrities got in a made up lift that day.

Where did I get this game?


The price for ‘Sim City’ has sky rocketed in the last two years, presumably fuelled by enthusiasm for the latest releases in the series.  For a modern gamer, accustom to ‘SimCity 4’ and ‘SimCity 2013’ it is little hard to go back to the original for a long session.  Both of the new titles are so much more complex and engaging and don’t require infinite cash cheat codes to keep you busy. But for a less stressful more sedate game, you can do worse that pick up the Super Nintendo version of ‘Sim City’. I was given my copy for a birthday present, and while it is rather monotonous and limited, it is certainly relaxing to play.
Posted by Julian Hill at 5/01/2015