This action platformer should be celebrated for its tight responsive controls and clever stage evolution gimmick. But to fans of a certain 1982 Sci-Fi film, it’s hard to ignore certain visual similarities.

Developed by Traxmaster Software
Released in 2019

‘Super Mario 64’ is arguably the most influential games of the 3D era; it set the benchmark for 3D platforming mechanics that echo even in current games. But According to ‘Star Fox’ creator Jez San,  Mario's success in the third dimension is down to an unassuming little game called ‘Croc: Legend of the Gobbos’.  Talking to Eurogamer, San claimed that ‘Croc’ was originally pitched by Argonaut to Nintendo during their exclusivity arrangement. "We mocked up a prototype using Yoshi” he says. "It was essentially the world's first 3D platform game and was obviously a big risk”. But Nintendo were still reluctant to allow outside companies use their characters so “the deal fell apart." San even claims that Shigeru Miyamoto even confesses that the game influenced ‘Mario 64’. “Miyamoto-san came up to me at a show afterwards and apologised for not doing the ‘Yoshi’ game with us and thanked us for the idea to do a 3D platform game”. While it’s largely been forgotten today, Argonaut’s ‘Croc’ was release for the PlayStation, Saturn, and PC and enjoyed moderate success. Had it carried the ‘Yoshi’ name it would probably have been still celebrated today. 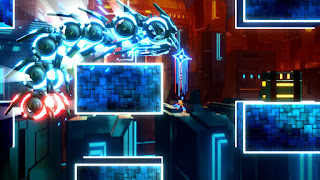 A recognisable license offers many benefits to developers. An established audience will be immediately attracted to the new title. The characters and worlds of the source material can be transposed easily into the game, and even established music and visual aesthetics can be used as easy starting points for a new addition to an established series. But as we have seen with ‘Croc’ and also games like ‘Journey to Silius’ and ‘Shatterhand’, sometime developers have to adapt their game to work without their desired license attached.

Developer Will Traxler is clearly a fan of the 1982 Disney Film ‘Tron’. “I’ve always been a fan of the aesthetic from the ‘Tron’ movies. I grew up in the 80s and am fascinated by the comparatively low-tech effects used in much of the media from that period.” His game ‘Exception’ is the most ‘Tron’ like game to not carry the ‘Tron’ license. It so explicitly ‘Tron’ inspired that it feels like it was pitched to Disney as a ‘Tron’ game, only for it to be rejected by the house of mouse. You need only watch the games introduction sequence to see that ‘Exception’ is a ‘Tron’ game in all but name.
Inside an elderly lady’s laptop, digital entities are fighting against a virus that has infected her computer. In ‘Tron’ they would have been called Programs living in the grid. In ‘Exception’ they’re Threads in the system. In Disney’s film the digital defenders follow the orders of an Overseer called the MCP, in this game everything answers to the commands of Alice34. 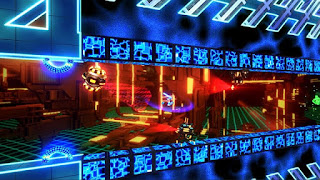 The world of this game will be immediately recognisable to anyone familiar with ‘Tron’. Black shiny buildings punctuated with blue streaks of neon. Digital highways see races between cars leaving light trails, with the criss-cross of a fluorescent green grid floor extending to the horizon. The loading screen shows familiar rotating concentric rings; almost indistinguishable from the identity discs   so closely associated with Steven Lisberger’s 1982 film.

It’s a world of surging electrical sounds that perfectly complement the catchy synthwave soundtrack by Kalax and Waveshaper. It’s music reminiscent of the amazing soundtrack heard in ‘Velocity 2X’ but it is almost certainly inspired by Daft Punks ‘Tron legacy’ score. Orchestral in places but also fast and electronic, striking the perfect balance between epic and frantic. 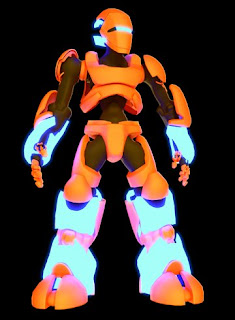 While the story, visuals and music may be influenced by the world of ‘Tron’, the gameplay takes its inspiration from action platformers, most notably ‘Strider’ and ‘MegaMan Zero’. The game comprises 128 levels located in sixteen different worlds.   Armed with a light sword, enemies met are sliced and diced as you dextrously vault through the stages. The goal of each stage is to reach a glowing cube, and initially ‘Exception’ feels like a slightly generic ‘Ninja Gaiden’ or ‘ Castlevania’ clone. However, as soon as you grab the cube for the first time, you’ll realise that ‘Exception’ is far more complicated and exciting than it initially seems. When activated the cube will actually cause the stage to evolve: The game momentarily pauses as the entire environment rotates, twists and warps. “After creating a basic platformer framework, I started toying with the idea of levels that transform in simple ways. It started with some basic platforms that would shift around as the player moved through a level” recalls Traxler. “Finally I was playing with the game engine one day and realised I could just make the entire level transform.” What was once walls can become the floor you’ll then stand on. While gravity and the side-on 2D view of the stage remain constant, the levels may twist; turning the top into the bottom. “When you have a level that rotates sideways or upside down, this can open up a lot of interesting opportunities for the player” boasts Traxler. 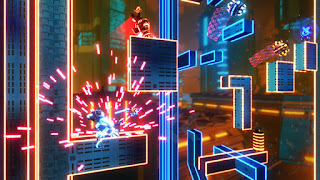 What starts off as an interesting visual gimmick quickly becomes an integral element of the game. You’ll play through levels with a consideration towards how the stage will need to be once the evolution has taken place. For example, you could remove a wall using your beam sword, but then it won’t become a platform to stand on once the level is orientated in a different direction. Unlike the main protagonist, Level enemies occupy predefined ‘local space’; so when the levels rotate and transform, foes maintain their original orientation and gravity. In practice this means that if an enemy is patrolling a platform and the level inverts, that same enemy will end up walking on the ceiling. Of course they will still hunt down a player, but the altered orientation may mean they’re out of reach or alternatively in a more troublesome position for the player.

However, puzzling potential is somewhat squandered as you don’t get a say over how the level evolves, you don’t choose the way the level with rotate or change. ‘Exception’ could have become far more intriguing if you had any control over how the level changes. Without this once you hit the orb it’s simply a case of hoping what appears will still be possible after your previous actions. According to the developers, although there is scope for slight experimentation every stage was designed with a set route in mind. “At its core, ‘Exception’ is an action game and I tried to avoid situations where the player needs to stop and analyse a situation” Admits Traxler. 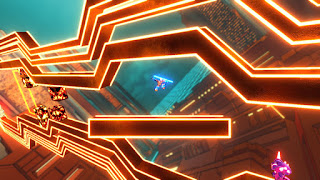 As such all you really have to do is get through the three permutations  of the same level as quickly as possible, if you see an orb you should always leap towards it. Unlike a game like ‘Portal’ or ‘The Spectrum Retreat’ you don’t really have to worry too much about which direction you hit the orb, you don’t need to consider propulsion, velocity or any other Laws of Motion. Even if your die in the third stage permutation, you’ll be returned to the start of the stage and all previous actions will have been forgotten. It sounds brutal but as every stage can be finished in minutes it’s a fast paced game that always feels frantic and relentless.

Each new level offered something new, whether it was laser traps, different platforms, or new enemies. By the games closing you’ll be adept at ricocheting off bounce pads, manipulating moving platforms and avoiding pools of lava. Nothing revolutionary to the action platform genre but all done well. At its best you’ll see the end goal from the start position and then watch in awe as the levels evolves to expose the path to it. 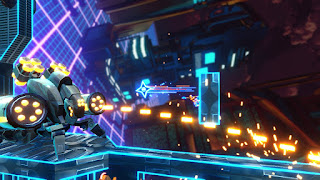 There is nothing stopping you reach the goal before performing  all the stage evolutions of course, but to do this you’ll have to have complete mastery of the games responsive controls and the many stage mechanics there is a steep but fair learning curve, where levels always felt challenging but doable and finally conquering them felt like a thrill. In between standard levels are boss fights, which are far more complicated than its being larger versions of standard enemy foes. Many will manipulate or destroy the levels they inhabit, so precise sword swipes must be performed while leaping between platforms and safe zones.

As you progress through the game there are opportunities to upgrade your character and their abilities. In fact there are two different ways to do this.  A player can level-up by finding hidden ‘bytes’ scatter throughout stages.  Typically they’re found behind destructible walls or laying in some hard to reach practically hidden area. Alternatively speed yields reward. For every level, the player is awarded up to four stars based on how quickly they completed it. The more stars accumulated, the more quickly you will unlock new attacks. Bonuses can reduce a stage time and therefor increase the star count too. “Say a player finishes a level in ten seconds. During that run, the player performs and aerobatic attack that destroys multiple enemies using different attack types. Perhaps the player also destroyed every single enemy on the level. Both of these events create bonuses for the player” explains Traxler. “That ten-second completion time might actually result in a final time of eight-seconds after the bonuses are considered”. 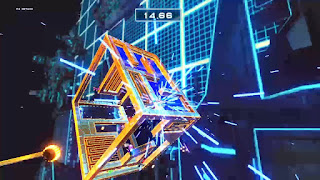 A player’s final score can also be added to global leader boards giving some a drive to replay stages in the hope of become a global champion. “The goal is to create incentives for players to apply creativity to their speed running. The fastest time might be a straight line from point-A to point-B, but the best leader board score might involve some elaborate techniques” says Traxler.

Of course when a game depends so much of speed, good performance is critical. To maintain a constant 30fps refresh rate there has been a visual downgrade for the Switch‘s ‘Exception’ when compared to the PS4 version. No longer 1080p, the Nintendo release runs at 720p both dock and undocked. In handheld mode, the background resolution is also scaled down slightly to improve performance. But despite these visual compromises, developer Traxler remains happy with the experience Nintendo fans are being offered. “I think Switch players will be very happy with this version. The foreground action is nearly identical to what PS4 and Xbox One players’ experience.” 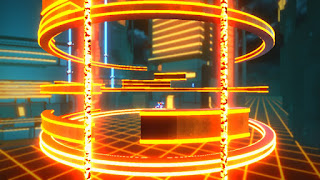 ‘Exception’ is certainly an attractive and stylish game. While the game is two-dimensional, all of the graphics and environments are three-dimensional. This allows for realistic real time global Particle and lighting effects, something you don’t see in most 2D platformers. Alongside the neon lighting there are continued nods to the game taking place in the world of a computer. As you take damage the screen becomes more pixelated. While this makes the game harder it also makes it feel like you’re stepping back a console generation with each enemy hit.  Your characters 3D model almost feels like a 16bit sprite after a few bad enemy

confrontations. A similar thing that happens when you play ‘Tron Evolution’ and it’s yet another reminder of how close ‘Exception’ is to Disney’s under-rated sci-fi classic.

It’s a shame the game doesn’t carry the ‘Tron’ branding as it would have raised the games profile and potentially attracted a bigger audience. It deserves as much because
‘Exception’ is an enjoyable game. At around 5 hours it’s a short game, but once you’ve mastered the controls and fully upgraded your protagonists it’s hard to resist the lure of replaying levels to see how quickly you can complete them and if you can compare with the world best. Just don’t be surprised if you see the names Kevin Flynn or Clu at the top of many online scoreboards.