Now-a-days it's fairly common for RPG elements to be shoehorned into every genre of game but this wasn't the case in the nineties. While it may not look it, 'Wonder Boy in Monster World' is a whole lot more than linear jumping on platforms.


Between 1986 and 1991 there were more 'Wonder Boy' games released in Japan than there were 'Final Fantasy', 'Dragon Quest' or 'The Legend of Zelda' games. Although it vanished after a flurry of games, for five years the 'Wonder Boy' franchise was clearly rather popular in the Far East. 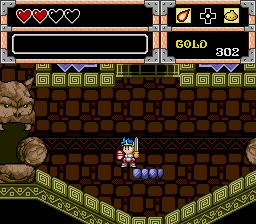 The series itself consists of the main 'Wonder Boy' games and confusingly also games from the 'Monster World' series. Titles may be part of one series, the other, or indeed both. Despite most being released, few 'Wonder Boy' games found popularity on Western shores. Of course, some players may have been enjoying the games and not even realising due to legal wrangling. Sega owned the rights to the Wonder Boy characters' but developer Westone owned the games themselves. This meant they could port the games to non Sega consoles with Sprite swaps and new names. Some 'Wonder Boy' games became 'Adventure Island' titles as a result.

It tells a slightly predictable but none the less charming story; where an adorable blue haired hero must save the world. Admittedly the world Shion wishes to save is actually called "Monster World" suggesting that Monsters should have a fair claim to exist there, but it was more peaceful (if inappropriately named) prior to their arrival. Leading the invading army is the villainous BioMeka whom Shion must defeat to return peace and harmony to Monster World (in so doing making the name once again inaccurate). 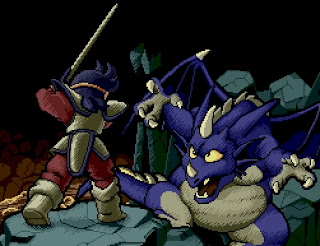 Like the other games in the 'Wonder Boy' and 'Monster World' series, 'Wonder Boy in Monster World' combines standard platforming elements with things more typically associated with a RPG games. Playing similar to 'Zelda II : The Adventure of Link' the action-adventuring is viewed from a side on perspective with hero Shion collecting weapons, items and magic, talking to village folk and exploring an open game world filled with floating platforms to leap over. According to 'Video Games and Computer Entertainment' magazine it's "'Zelda' Lite [...] a beginner level RPG ".


As with so many older RPG style games, 'Wonder Boy in Monster World' starts off surprisingly difficult only to get progressively easier as you pick up more powerful weapons and can take more damage. In fact for Western audiences the entire game was made noticeably harder. In the original Japanese release death returned you to the most recently used Save Point with your gold and collected upgrades intact. Indeed backtracking across the game world was actually made quicker by deliberately dying; as it would teleported the hero across the map with no penalty other than the inn's usual fee. For English players however, death was absolute. Losing all your hearts meant seeing a Game Over screen. Of course you could resume from your last save point, but any character development or story progression achieved after that point has to be redone. It's not however the only way that 'Wonder Boy in Monster World' was made tougher outsider of Japan. 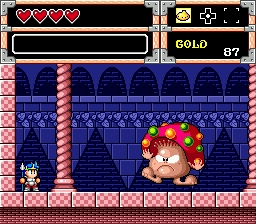 Bosses have harder forms and enemy numbers are significantly increased. Oddly the drop rate of items wasn't lowered to reflect this though, meaning you'll typically have enough money to buy everything you see in every shop. 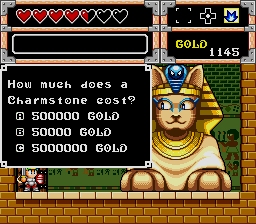 Fortunately there is a lot for Shion to buy as he travels through the many interconnected regions of Monster World. Players can improve their armour, boots, shields and weapons throughout the quest, with eight available upgrades for each.


There aren't character stats in 'Wonder Boy in Monster World' a conscious choice by game creator Ryuichi Nishizawa. His approach to game design is detailed in the informative  'Sega Mega Drive / Genesis : Collected Works' book. He notes that "in a typical RPG as the main character progresses through the game only the stats number goes up. However for an action RPG to be satisfying the characters progress has to be reflected in their action, abilities and appearance." So instead of just being able to jump higher as a result of defeating enemies, you instead have to use the coins obtained from their deaths to buy new shoes to wear. 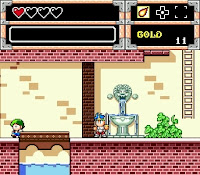 Of course the ability to customise the hero doesn't remotely compare to games like 'Final Fantasy III' or 'Chrono Trigger' but there is still a need to balance which items you equip. The hero can be tailored to suit play style to some extent. Offensive players can opt for doubled handed spears, while defensive heroes can instead favour a sword and shield combo. But thrashing enemies with weapons isn't the only form of attack.


There are six types of magic, including Fire Storm, Thunder, and Quake. Health-replenishing items are available for purchase, and the life meter can be extended by finding heart containers. Judicious use of magic is imperative though, as once used its hard to replenish and you'll struggle to defeat some later bosses with swordplay alone. 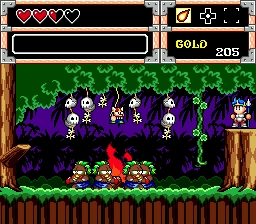 While he doesn't form a 'Final Fantasy'-esque party during his travels, Shion will often be joined by a small companion who follows you around. However, each companion is bound to the region they belong to and will return to their respective homes when you leave familiar territory.  These companions function essentially like Navi in 'The Legend of Zelda: Ocarina of Time', unable to harm foes and acting more like a guide. Amazingly this isn't the only time that 'Wonder Boy in Monster World' foreshadows what many consider the greatest 'Zelda' game; despite coming out 7 years before 'Ocarina of Time'. By the game's end you'll see yourself playing Link's favourite instrument with each button representing a different note. Admittedly it's rather awkward on the Mega Drive controller, but should you get the timing for the melodies spot on doors will open and you'll be able to progress with your adventure. 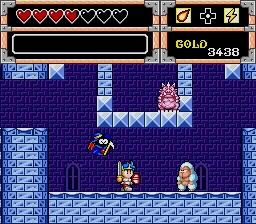 Like the 'Zelda' games you can choose a secondary item or weapon which is displayed on screen alongside your health and wealth. The only problem is that one third of the screen is devoted to this character information. While some of these gauges are necessary, the amount of play space that is forfeited for this purpose seems excessive. Indeed you really feel like you're missing out when the graphics shown on the remaining 60% of the screen are beautiful. The environments you visit are all your typical RPG fare; icy worlds, deserts, scary fortresses, with a "surprise" space finale. But lush scrolling backgrounds clearly define each area, with the game having a charming hand drawn story book look.

Our hero and the enemies he faces are all sketched with a bright colourful palette, filled with charming detail and fluid animation. If anything you would be forgiven for thinking 'Wonder Boy in Monster World' was a Super Nintendo game rather than a Mega Drive title. Foregoing the gritty visual style that typified the system the game looks unashamedly childish, providing players with a world of fantasy and wonder. Complementing the delightful visuals is an even more impressive soundtrack composed by Shinichi Sakamoto. It has an orchestral feel to it and each area in the game has its own theme. Indeed, in the first 30 minutes alone, you'll probably hear half a dozen different melodies. Each one is unique and all are ideal accompaniments to exploration.


And there's no shortage of exploration in 'Wonder Boy in Monster World' . Even though one town does act like a central hub (with all other areas accessible from it) there is still an awful lot of backtracking and dead ends in the game. Much like 'Metroid' and 'Castlevania' it's worth mentally mapping where these dead ends are as most will become accessible once an item or ability has been obtained. Essentially these are barriers to progression, forcing the player along a set route despite the game appearing entirely open. It's a common trait in RPGs yet 'Wonder Boy' director Ryuichi Nishizawa believed his game series offered some of "the best 'Metroidvania' games". 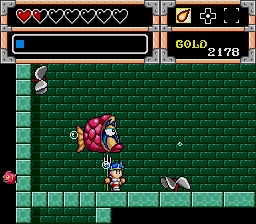 In comparison with other RPGs, 'Wonder Boy in Monster World' is short, lasting just 8 hours on a first play through. The bulk of this is spent trying to figure out where to go and how to use the item you've just obtained. Villagers may tell you where you should be going next, but they neglect to mention how you're meant to get there. For example, I spent nearly an hour strolling around with a trident equipped looked for the Water Temple. I discovered totally by accident (after mistiming a jump) that my destination was actually a pool that I had dismissed as an environmental hazard. Yes it may sound obvious now, but I had already been in the same pool a dozen times (without the trident equipped). Modern RPGs have made me dependent on World Maps and way point markets it seems. 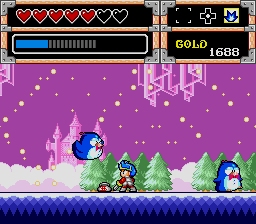 'Wonder Boy in Monster World' really does feel like it is over too soon. The final boss presents an unfair and excessively punishing challenge but there was a reluctance to beat him as it meant an end to an enjoyable, underrated game. In the closing moments the game does say that the adventure is "to be continued" but the next game released was 'Monster World IV' which has Arabian aesthetic and tells a very different story. Series creator Ryuichi Nishizawa has repeatedly said he wishes to return to the series and new games are apparently inbound, but it is unlikely Shion will feature.


'Wonder Boy in Monster World' may have been overlooked by the West and lost in a confusing maze of names in Japan but it's a game that's worth looking for. As Eurogamer said "'Wonder Boy [in Monster World]' has compelling and confident genre-straddling design, backed up by well-tuned gameplay and just the right amount of depth to keep you playing and exploring." Of course it isn't the best RPG or platform game you can get, but it's not often you seem the two genres so beautifully interwoven.


Like most Mega Drive games I own, 'Wonder Boy in Monster World' was part of bulk buy bundle. It had sat on my shelf un-played for far too long simply as I had never heard of it and wrongly dismissed it as a platformer with swords. While this initial assessment was actually true, it's so much more too. Yes it is short in length, but the game was well worth the £8 I paid.
Posted by Julian Hill at 10/28/2016