‘The Spectrum Retreat’ is an intriguing mix of ‘Portal’ style puzzles and ‘Bioshock’ atmosphere, but can one man’s labour-of-love so effortlessly measure up to such celebrated works of gaming art?


I hate Dan Smith. At the age of 15 I was wasting my days running away from zombies on my PlayStation and running away from girls in real life. At the same age Smith started work on ‘The Spectrum Retreat’. “Bored one day, I downloaded the ‘Unity Engine’ and created my first project ‘Spectrum’” recalls Smith. “I thought I was just going to create something simple, a puzzle game that invited you to look at any object and swap colours around. Swapping colours was fun, but I soon found that you can’t design puzzles with zero constraints. The solution was to limit colour swapping to particular cubes and design levels around those, in turn creating the core mechanic of what is now ‘The Spectrum Retreat’”.

Understandably this challenging intelligent game caught the attention of BAFTA, turning bedroom coder Smith into an Award winner. “By the age of 18, I had a polished 20-minute prototype over three years in the making”. ‘Spectrum’ was nominated and won the BAFTA YGD Game Making Award in 2016. Collaboration with Ripstone publishing followed and with their involvement ‘The Spectrum Retreat’ evolved into the impressive game now available on the Switch eShop.

According to Smith ‘The Spectrum Retreat’ “is all about swapping colours”. Using a hand held device, a player is able to change the colour of cubes dotted around the stages. Although opening stages are you simply swapping between two colours, as the game progresses more and more must be juggled. However the challenge comes from the fact that your futuristic device is only capable of storing one colour at a time. Holding a colour allows the player to progress through any gates of that colour. While the colour change device has infinite range, you can only interact with the cubes that you can see. So the main thrust of the puzzles in the games is arranging and colouring cubes to ensure you have a line of sight to them when you need that colour. 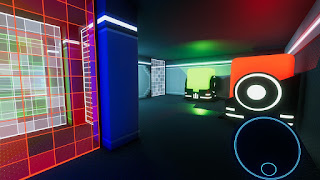 Like so many similar puzzle games it sounds abstract and confusing when described in isolation, but when playing ‘The Spectrum Retreat’ it all feels logical and dare it be said deceptively simple. As Smith points out “there are no reaction based puzzles, there are no timing based puzzles, no physics involved. Your ability to think about the puzzle in front of you and then just carry out the actual execution of it is all the skill that's required”. This isn’t strictly true though, as some levels involve floating coloured blocks that need to be shot at specific times. Over great distances this proves fiddly with the Switch’s analogue controls, especially in handheld mode where the aiming reticule is minuscule. As the levels pass four colours are introduced and you start to have to consider what exists above and below you as well as in front of you. To make things more complicated still, for the Second half of the game you will also have to factor in colour coded teleporters, and the last levels involve level orientation manipulation. There’s a surprising amount of depth to the game, and on one occasion I even had to draw a map on paper. Obviously it would have been nice to have a map in the game but to be honest that would have diluted the difficulty somewhat. “A big part of the challenge of the game is memorising where you put different colours” reminds Smith, “figuring out what order to arrange colours in”


While the levels do vary and there are creative ideas continually introduced, the finale of too many stages involves progressing through a corridor consisting of various coloured gates. It seems your goal for the latter half of most chambers is simply to position coloured cubes to allow you to see them as you pass through this corridor. Admittedly, it’s fun the first couple of times, and becomes more varied once more colours are introduced. However often a stage’s ending will be greeted with a sigh when I realised you have to do something very familiar to finish it. 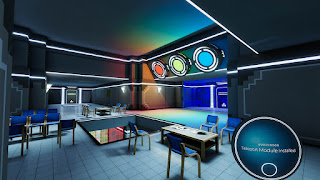 Considering there are no continue points mid levels and it’s because it’s possible to lose a colour, you’ll also find yourself frequently in a no-win situation. You can of course restart a stage so you’re never permanently stuck. However, this can be incredibly frustrating when you’re close to the end and a single mistake can cost you its completion. Some stages are too long, as even a perfect run when you know the solution can take ten minutes. A careless error nine minutes into this really tests the patience.


That being said there is always a drive to finish a level, if only to see what happens next in the story. ‘The Spectrum Retreat’ (initially at least) keeps the puzzles and the narrative entirely separate; a conscious decision by Dan Smith. “Something I wanted to explore with this game was having quite a unique gameplay and narrative structure. We have a hub world in the hotel that links all the puzzles together but it's more than just a hub world. It’s also a game play space and it's also a very involved space as far as the narrative is concerned”. 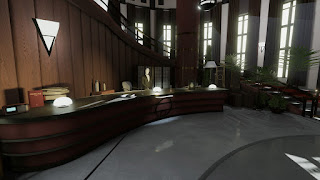 Echoing adventure games such as ‘Myst’ and ‘Riven’, solving puzzles unlocks new areas in the hotel which in turn progresses the story. For Smith it was crucial that story development was divorced from the puzzling. He believes it’s “a really interesting and involved narrative [told] in a way that doesn't disturb the thought process that you go through when you're trying to just solve puzzles.” The story acts as a reward for solving puzzles and according to Smith “provides quite a nice relief from just constant puzzle solving”.


Although amnesia stories are hardly original ‘The Spectrum Retreat’ is intriguing from the outset. You wake alone in the Penrose Hotel, unable to recall your past and with no sense of identity. The player’s only company are mannequins and there’s a lingering sense that they’re responsible for keeping you trapped and that this hotel isn’t what it seems. Like the ‘Bioshock’ and ‘Portal’ games, the story in ‘The Spectrum Retreat’ unfolds primary through voiceover. Characters communicate with you but for the most part you can’t see them. Thankfully the voice acting is engaging enough to maintain attention, which is certainly testament to the strength of Amelia Tyler’s performance. It’s worth being aware that the story that unfolds is actually quite harrowing. To say any more would spoil things, but I was certainly caught off guard by the revelations and had to mute one section. 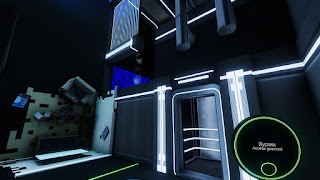 The separate hotel and puzzle sections of the game, while both viewed from a first person perspective look distinct. Once again ‘Bioshock’ and ‘Portal’ provide great points of comparison: The hotel is lavish, detailed and intricate. Reminiscent of the decadence of 1920s New York. The stylish Penrose hotel looks lived in, comfortable and romantic. Warm colours and rich furnishing define each room but they fail to disguise an ominous foreboding sense of dread inspired by the lack of any other guests and a prominent blood stain in the restaurant. While not photo realistic, the hotel section of the game do look incredible especially given the game’s humble origins. There is occasional screen tearing and jagged shadows but that never stops the environments being anything but immersive, even if it’s devoid of any human life. “Every aspect of the hotel has been meticulously crafted to create a captivating environment to explore” claims Smith who is understandably proud of ‘The Spectrum Retreats’ Visuals. However, it’s ultimately essential for the hotel to look this good if it’s to contrast with the authentication chambers. “We’ve got the Art Deco hotel which is very classical, it's very colourful and we also have the more clinical puzzle environment.” For the colour swapping game mechanic to work, a player must be able to clearly identify what can be swapped. To avoid frustrating trial and error the environments need to highlight, rather than disguise, the colourable cubes. “We needed a really de-saturated look for the puzzle environment so that the colour elements could really pop” clarifies Smith. “When you walk into a puzzle room you should be able to quickly identify which things are important to you progressing and which parts are just part of the environment”. 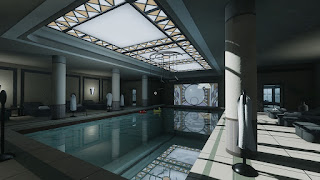 If the hotel has detail that rivals ‘Bioshock’, ‘Portal’ was perhaps the inspiration for the authentication chambers. Valve’s seminal work has a celebrated look, that while monochromatic, remains stylish. ‘The Spectrum Retreat’ can stand shoulder to shoulder with it. “We don't want to just make greyscale [levels]” notes Smith. “We want to keep it interesting and I think this really hyper modern hyper clinical look complements the Art Deco fancy thrills environment in the hotel”.

Sadly the audio isn’t as impressive as the visuals. It’s atmospheric but forgettable. Of course you don’t want music to be a distraction when you’re solving puzzles, but considering the narrative hotel sections are deliberately made to feel different, it would have been nice for there to be a big gear shift in audio as well as visuals. The music is underwhelming but only in comparison to the rest of the product. At around 7 hours it’s shorter than I would like but at least this means ‘The Spectrum Retreat’ doesn’t outstay its welcome and most players will see how the intriguing story plays out.

It’s an astonishing achievement for such a small team and with one game Dan Smith has made me feel like I wasted my youth. Playing ‘The Spectrum Retreat’ feels like witnessing the debut of a creative genius and I can’t wait to see what he does next with a larger team and a bigger budget behind him.


A copy of this game was provided by the publishers for review. They have not seen or had any influence on the content of this review prior to publication.