Imagine an arcade game where you and a friend control characters who had one purpose in life; popping balloons with harpoon guns. Each stage of this game consists of a single screen and in an ‘Asteroids’ style way, each time an onscreen bubble is popped it divides into two. The play space as a results gets more cluttered, filled with marginally smaller bubbles which again divide when harpooned, only to eventually vanish when struck for a third time. To complete the stage, you must burst all these bubbles and avoid losing lives by being hit by them.  After completing each stage, these two players progress to a new location around the world, where there are yet more bubbles to burst. 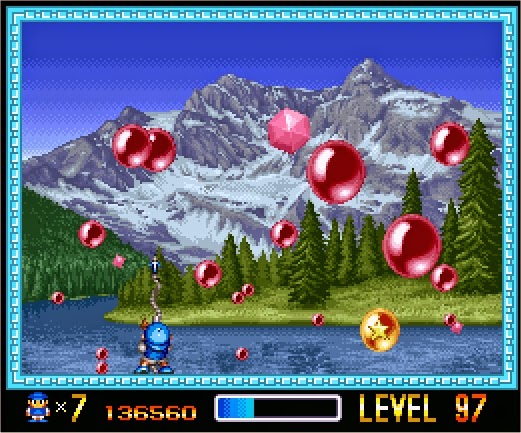 There are three key things to note in this game. There are two characters, which pop bubbles, while travelling around the world. The perfect name for this game would therefore be ‘Popping World’, or at least it would be if it were made by a company that could correctly translate English. Alas, Tokyo based software developer Mitchell
Corporation could not and so arcade goers instead got to play ‘Pomping World’. 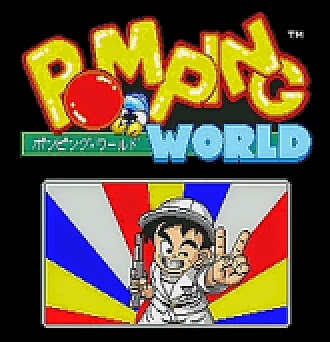 The machine was released by arcade giants Capcom and Taito and ‘Pomping World’ enjoyed a very warm welcome across Japan. The game was so popular in fact, that it was eventually ported to a multitude of home consoles and computers. Presumably it was at this point that Mitchell Corporation realised that they had christened their beloved game with a name that makes absolutely no sense in the west. The ‘Pomping World’ title was abandoned and ‘Pang’ was born. It is a fantastic name. It uses a word that manages to sound like the noise a harpoon gun makes while also remaining suitably Japanese, echoing the game’s original roots.  It was a name applied to all subsequent Asian and European releases but, it seemed Capcom, who published the home console version, considered it too Japanese and onomatopoeic for America. ‘Super Buster Bros’ was a far better name for the States, no doubt because it conjured up positive associations with Nintendo’s famous plumbing brothers. Japanese elements clearly are not desirable in American Snes bubble based games. 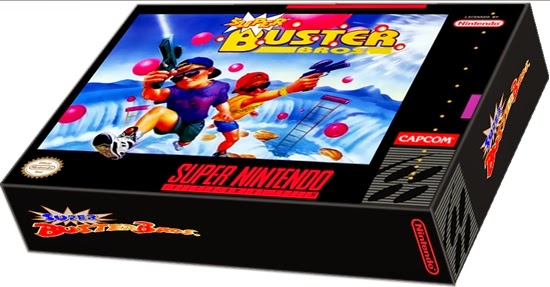 This is epitomised by the excision off the anime intermission screens that used to appear between levels in the arcade. In America ‘Super Buster Bros’ evidently is all about nineties attitude not world exploration. A glance at the NTSC box shows this. Safari outfits that the arcade characters used to wear are out, backward caps and neon colours are in.  Harpoon guns apparently are less exciting than blaster guns, so these are depicted on the box despite this only being a bonus weapon you can pick up. 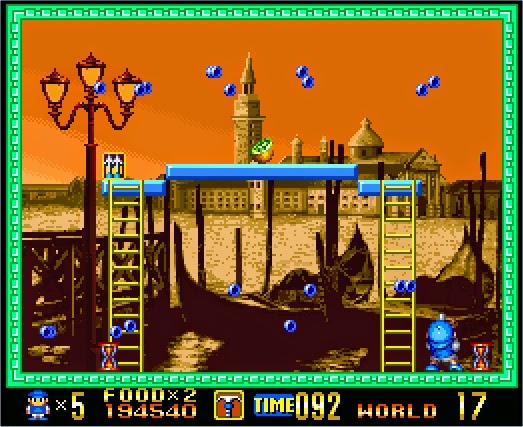 In many ways, calling the Super Nintendo game ‘Super Buster Bros’ makes about as much sense as ‘Pomping World’ did. Admittedly, it is a game where busting bubbles is the goal but if it’s a game that revolves around brothers, where has the second player gone?  The box shows two, but in the game only one can be played.

‘Pomping World’ was great in the arcade because two could play at once and while you worked toward the same goal it was still competitive. Dividing the bubbles in a haphazard manner could cause headaches for the other player and there was also a rush to get weapon upgrades like the twin harpoon or grappling hook. Bizarrely, other home ports on more rudimentary machines had this two player mode, so its exclusion in the Snes version of the game seem like a conscious design choice rather than a necessary technical cut. It was without doubt, the wrong design decision. Critics at the time applauded the multiplayer ‘Pang’ games. Stuart Campbell believed that the “very best bit” of the Amiga port was “the two player mode.” In his Super Play review, Jonathan Davies even went as a far to say that cutting the Snes multiplayer mode was “unforgiveable”. He is of the opinion that “’Pang’ [in the arcades] was always best as a two player game – ‘Oi, I was supposed to be taking the left hand side of the screen.’ ‘I needed that power-up, what did you take it for?’ ‘You should have shot that one, now it’s gone and killed me’. There’ll be none of that in ‘Super Buster Bros’ and for that reason the game’s appeal quickly pales”. 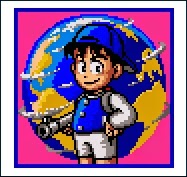 There is no mistaking that it’s a game designed from the ground up for two people to play together. Retro Gamer’s Paul Drury described the original two player arcade version as a “shared journey”. “Strategies emerge as once player takes on a big [bubble] while the other hunts down a solitary blighter trapped in a corner. There are collective sighs of relief when someone picks up a clock that freezes time for a few precious seconds. Fingers are pointed at who ever thought collecting dynamite and reducing all bubbles to their smallest components was a good idea. Squabbles erupt when someone selfishly snaffles both protective force fields.” “Remember”, Drury reminds us “you’re in this together”.  That is if you’re playing the game on anything other than a 16 bit Nintendo machine.

A much more appropriate name for the American Super Nintendo version of ‘Pang’ clearly should have been ‘Lonely Buster Brother’. However, despite this two player game only being playable solo, it is still playable. However, is it enjoyable on your own? 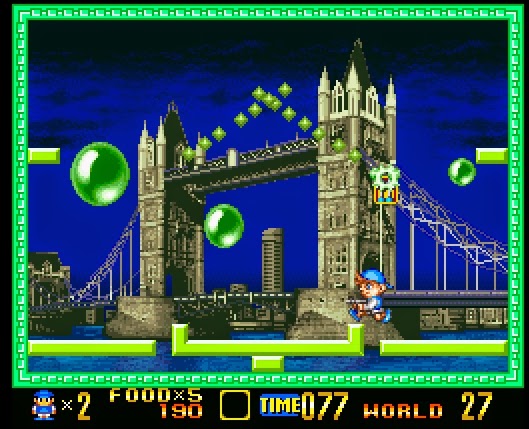 The core mechanics of each stage is exactly the same as the original ‘Pomping World’ game; you burst bubbles while avoiding them. However different ingredients in a stage does add some variety . The number of starting bubbles and their sizes changes with complexity added when some stages have platforms or ladders to negotiate. Other levels house animals who rather than attempt  to harm you will, instead cause havoc by jamming your weapon or popping  bubbles. The latter is more of a concern of course, since it will contribute to the number of dangers on screen. While ammunition is unlimited there are always things to consider when choosing when to fire and which upgrades are worth risking a life for. The Grappling Hook for example fires once and stays on screen for about five seconds. This may sound useful but in practice is actually not very helpful at all. If your life depends on shooting another target, the last thing you want is to have to wait to fire. Likewise the blaster gun may make it to the box cover, but it’s actually less useful in the game than the standard harpoon. It removes bubbles quickly, but its spread fire makes it harder to aim at specific targets and wayward bubbles are never your friend. 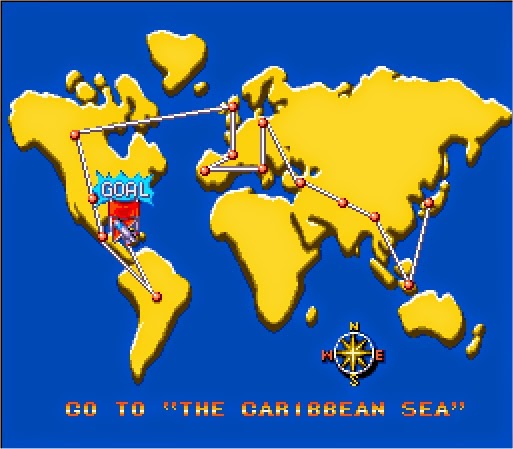 When the only thing that varies visually between the levels is the background, at least they are both educational and attractive. There are numerous locations to visit, varying from the Taj Mahal to the Wild West of America ending in the Caribbean . Without the world map that appears between levels though, it wouldn’t be immediately obvious where you are though. The London level is suitably called ‘Tower Bridge’, but France bizarrely doesn’t feature any of the iconic sites. 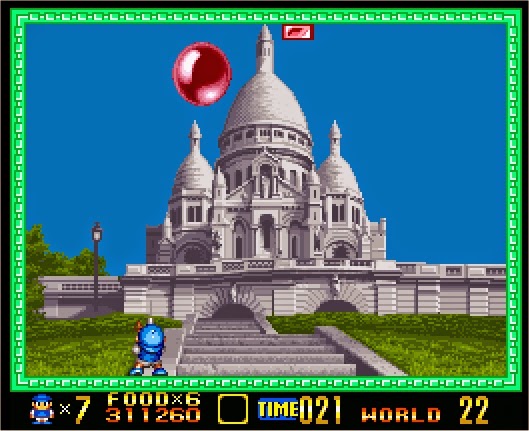 When you think of famous French landmarks you probably imagine the Arc de triumph, Eifel Tower or even a Vine Yard. You wouldn’t picture Pierrefonds Chateaux, which while beautiful is hardly well known. It seems almost like a Japanese game designer has flicked through a book entitled “Famous Places around the world” and randomly picked locations.  The background has absolutely no bearing on the game play though. While the arcade and other home ports had ice based stages, which sees you sliding uncontrollably, these are gone in the Snes version.

There are lots of clever visual tricks throughout the game that collectively make ‘Super Buster Bros’ an attractive game. You spend three stages in a  world location but between each of these stages the time of day changes. It may only be a pallet swap but it’s a visual flourish that is never even considered by designers of other similar games. The sole playable brother is quite an adorable little sprite too. 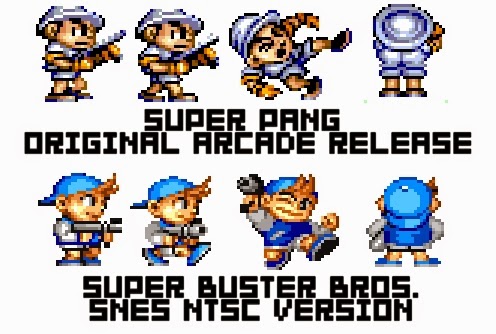 He remains full of adorable charm even though he has lost his penchant for Safari and is instead wearing his urban clothing. He may no longer get up to silly anime antics in the pictures that originally featured between levels, but he is still a pleasant chap to look at during the couple of hours it takes you to finish the game. Presuming you manage to complete all the levels of course, which is a challenge for one surprising reason. 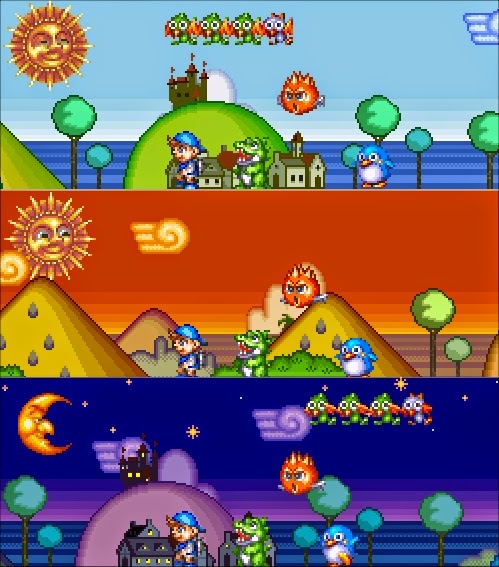 In reality, the biggest obstacle to completing ’Super Buster Bros’ isn’t the bubbles it’s monotony. All the bonuses, pickups and fancy backgrounds don’t change the fact what you have to do is exactly the same, over and over again. Admittedly this is true of a lot of similar arcade games, but at least in those you have a companion to help and hinder your progress. Half the number of players, in this case means half the fun.  It’s a shame, as the original game and indeed every other port, benefits from the two player option and becomes a fantastic little game to play as a result. There is still fun to be had playing in short bursts on your own, but anyone who has played any other version knows that they are making the best of what is being offered.

As Super Play said in their first issue, ‘Super Buster Bros’ really is “like a swan that’s had its wings cruelly clipped.” 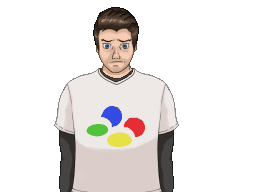 ‘Pang’ was a game my brother and I played a lot in our youth, on the Amiga rather than Super Nintendo. We were the ‘Buster Bros’. For Christmas he got me this game, and was as disappointed as I was that it wasn’t two player. I did enjoy playing through the game alone, but I would much rather have shared the experience with him. It’s a game that fluctuates in value, but is marginally cheaper if ‘Pang’ isn’t on the box – one of those rare occasions when the Japanese version sells for more than the American one. Playing the game gives you tinges of nostalgia, but these get lost amongst the throb of disappointment. Yes it is an enjoyable game and there are far, far worse on the Super Nintendo. But it can only really be adored by someone who has never seen how great the experience is with a friend, with a brother, with a second Buster Brother.
Posted by Julian Hill at 1/23/2015