Never released in Europe on any platform, it's hardly surprising that most have never heard of Square's 'Front Mission'. However considering the inaccessibility and complexity of this SRPG, are they missing out?

Developed by G Craft / Square
Published by Square
Released in 1995 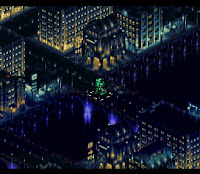 When audiences today think of a 16bit Square game they will think of a Japanese style RPG and if it doesn't have the word "Fantasy" in its title it will almost certainly have "SaGa" "Mana" or "Chrono" in its name. Today, various company acquisitions and mergers have meant Square Enix is associated with quite a diverse array of series and franchises (either as developer or publisher). You see the company name when you start 'Life is Strange' and their logo is on the box of a 'Tomb Raider', 'Hitman' or 'Deus Ex' game. However, so successful were Square's Snes fantasy JRGs that many are surprised to learn that the company were involved with other 16 bit titles. Though still an RPG of sorts, Square's 'Front Mission ' series has straddled many systems from its origins as a Super Famicom game. However, this first game was never released outside of Japan so western speaking gamers had to wait till it was eventually rereleased on the DS before they could play an official translation. In order to experience the complex and war-torn story on the Snes you have no choice but to turn to fan translations and Rom hacking. But it is a story that is worth the effort. 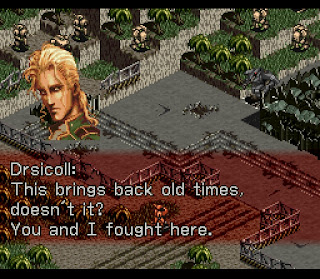 Traditionally, the series has hosted some very complex and well-told tales about war, sabotage, military-politics and ethics. Playing the first 'Front Mission' demonstrates where that legacy came from. Set in the not too distant future, the game takes place on the fictional Huffman Island in the Pacific.  After being charged with terrorism following an explosion they didn't commit Royd Clive and Ryuji Sakata are discharged from the coalition Ground Defence Force. In reality the explosion was caused by a villainous captain named Driscoll, who has also kidnapped Royd's fiancée. His goal was to break a peace treaty between the Oceania Community Union (OCU) and the United States of the New Continent (USNC), starting a War over occupation of Huffman Island. The bulk of 'Front Mission' takes place a year later when hero Royd has become a pilot of a walking battle robot called a Wanzer. He now fights with the Canyon Crows mercenary unit, claiming to be there to bring an end to the war but really seeking revenge on Driscoll whom he believes is responsible for His fiancée's apparent death.

If this plot summary has left you bewildered, 'Front Mission' may not be for you. With so many names, crafts and factions to keep track of it is easy to get confused. But for those paying attention (probably having to make notes of who's who) there's greatness in 'Front Missions' story which is lucky because you'll have to work hard to get to it.

'Front Mission' is a turn-based strategy RPG and it would be quite a leap for those who have only played 'Advance Wars', 'Fire emblem' or 'Final Fantasy Tactics'. Nintendo Power Magazine is typically known for their easy praise but their view of this game was less than rosy. When reviewing the DS port they called 'Front Mission' "a stark, futuristic 'Advance Wars' without the happy combatants and vehicle variety [...] brutally hard and mercilessly intense". They may have a point. The difficulty is unforgiving and even getting the perfect team together, before starting a mission, can literally take hours. Each of your characters pilot their own walking battle-tank Wanzer, and the games feature a very broad range of customisation. Each individual part of the Wanzer mech can be tweaked for the greatest possible performance, right down to paint colour. 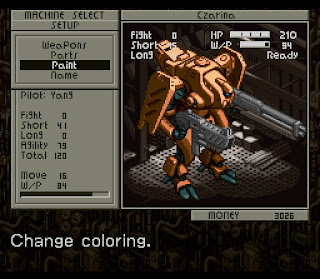 Provided the total weight does not exceed its Power Output limit, a player can configure a Wanzer out of almost any combination of parts with up to four weapons and an assortment of armour options. Backpacks, storage, leg servos, CPU, shoulder mounts, everything has to be considered and optimised for the best possible performance. The problem is that the interface doesn't make this part of the game particularly user friendly and it's tricky to compare your new parts with old ones.  You're also always looking at the varying demands of the next mission, adapting accordingly. For example you can create a sniper style Wanzer built to move fast and shoot long-range weapons from a safe distance, or you can build a Close Quarters Wanzer designed to withstand heavy hits and deal close-range damage. In 'Front Mission' preparation is perhaps more imperative than execution, as unless the most optimal equipment choices have been made success in battle is neigh on impossible.

Unlike other Tactical RPGs, 'Front Mission' is entirely linear. Your path through the game pre-determined with little opportunity for deviation. Typically game play involves watching plot-related scenes which set up a mission. You then travel to the location on a point-and-click world map, with new locations revealed as they become relevant to the story. Towns and cities act as intermission points and it’s here that you spend an age perfectly customising all your Wanzers, before heading into a mission to see how hopelessly wrong your choices of guns and armour were. 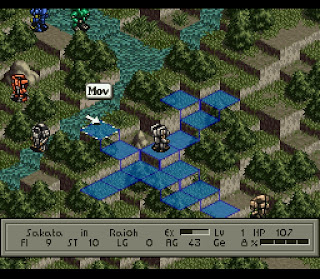 Missions involve a grid-based battlefield and turn based combat. Using a D-Pad that's at odds with the isometric view point, you instruct your forces to move one at a time to any available highlighted box. After moving you can either use an item or if the enemy is within your attack radius you can then do battle using either close, medium or ranged weapons (presuming you've had the foresight to equip guns to do this). Lowering their health to zero destroys the enemy and missions last until one team is entirely wiped out. Unlike other games in the genre there is no variety in the stages with no rescue, defence or escort missions. Battles also only ever involve two sides, with no bystanders to get caught in the crossfire. While you can suffer casualties, if Roid should be killed the game is over so using your strongest Wanzer does add a risk reward mechanic to the battles.

After many many hours spent playing 'Fire Emblem Awakening' I felt very at home in 'Front Mission' and this battle experience was rather fortunate. The game doesn't do much to explain the interface, battle system, or nuances of damage and terrain navigation. To make thing more alienating for newer players, no western release means no western instruction manual. It may not be just the complex plot that baffles a huge chunk of the audience, with little hand holding the battles could seem daunting too. 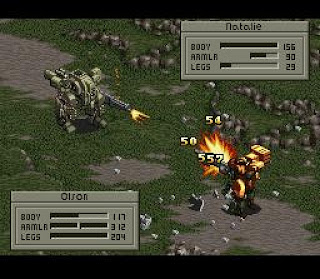 Initially missions last half hour but this tripled by the end of the game. Like a chess master you have to think three moves ahead of your enemy, but with random chance being a contributing factor, all the planning and the perfect customisations may not be enough. After a 45 minute battle, it is a touch annoying to have to restart simply because luck hadn't favoured you. When you lose a three hour campaign through no fault of your own though it's mortifying. If you do opt to play 'Front Mission' I can't stress quite enough the need for artificial save states. With a 20 hour game length, getting to the conclusion of the story takes long enough without having to replay the same three hour mission numerous times.

The music and graphics feel very of their time, with unmistakably SNES era music accompanied by some pretty detailed (albeit small) sprites. The game won't blow you away visually, but most importantly it's functional. The fixed isometric angle can at times make it hard to see what's going on. However it is clear what weapons the various Wanzers have equipped and which direction they are facing, both of which are somewhat essential to the game. That's not to say 'Front Mission' lacks the Square polish they liberally apply to their games. Fighting between Wanzers is frequently shown in close up which certainly ups the drama and makes a change from spending hours looking at a map. The character portraits are the high point though; full of life, emotion and depth. This is of little surprise when you think that they were designed Yoshitaka Amano, who has acquired almost legendary status since this games release, owing to his work on the 'Final Fantasy' games. 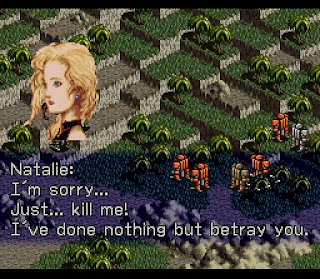 The pilots themselves have quite acutely defined personalities. As is often the case, baddie Driscoll is the stand out character; a true Villain that won't blink an eye lid at destroying hospitals should the need arise. But even minor players such as Carabell and Blakewood aren't lacking in growth or development, prompting many a plot twist. Thankfully the fan translated script I read isn't corny and thrown together. The dialogue is not just cohesive, it is also entertaining to read, a blessing when you consider the strong story is the real reason you're spending half a day lost in customisation menus.
'Front Mission' is probably one of the most mature and complex games to be released on Nintendo's 16 bit console. You'll have to invest a great deal of time to see all the major plot points and then you'll spend an equally long time trying to work out what's going on. Not that that's a bad thing of course, I applaud a game for being intelligent, complex and thought provoking but that is an acquired  taste. in today's world of quick fix, instantaneous gaming  gratification, it wouldn't be a surprise if new players quickly get frustrated or bored; lost in the melee of menus, stats and story. Much like other strategy RPGs  'Front Mission' is a game that only few will like and even fewer will be able to fully complete. Were it made by a company other than Square it would have be called their finest work, but when sat alongside the likes of 'FinalFantasy III' and 'Chrono Trigger', 'Front Mission' was always going to feel inferior. However should you love number crunching, political intrigue and picking the best outfit for a number of huge robots, this could be the best game you've never played.

Where did I get this game from?
One of my closest gaming friends gave this to me when they acquired the U.S only DS version. I of course have it on the Super Famicom, but with the right patches the Retron5 will happily play this in English on my TV. It's worth pointing out that while my friend is exceptionally generous he does make jokes about the fact that this game involves playing with Wanzers. Something I have managed to refrain from doing at any point in theses 2000 words.