It’s that age old question, robots or commando men? You may not go through your day wondering this question, but for some it’s an impossible decision that they one day have to choose between. Robots or commando men? Robots or commando men?  For reasons involving, German censorship and Nicaraguan counter-revolutionaries, what the American and Japanese markets know as the Contra Games have until recently been known as Probotector in Europe. Every game up until 2002 have seen a sprite swap with the gung ho Rambo style protagonist replaced with Anime style humanoid robots. Apart from the story and a few cut scene screens very little else is changed. The bulk of the enemies remain the same, as does the game play and level structure.  So in essence the only choice you have to make in deciding which version of the game you want to play depends on your preference between Robots and Commando Men. I have never understood why anyone would prefer playing as Jimbo and Sully though. Even in the original NES games you are fighting an alien entity, and while the US release may have been set in the (then) present day (1987) the original story line of the Japanese game was set in the future (2633). With a series where the narrative jumps hundreds of years between instalments playing as non human charters help to avoid narrative pot holes.  With robots you don’t have to worry about explaining that the playable characters are descendants or clones of the heroes of earlier games, nor do you need to justify the elaborate weapons on vehicles. When the bulk of the enemies you face are either aliens or robots, it makes no sense in a narrative context to be playing as parodies of Stallone or

Schwarzenegger, with their bulging Chris Redfield muscles and John McClain vests. To fight robots you use robots, especially when you consider the feats your player character over comes. How can any organic man jump from rocket to rocket firing a flame thrower as he leaps? Can your average Joe cling onto a helicopter with one arm while firing a grenade launcher with the other? (However it is important to remember that there’s no bigger hero than a nineties’ action hero!) So for me it’s a simple answer to the question that has tested the greatest minds, it’s not Contra 3, its Super Probotector. Its robots, not commando men.

Title controversy aside, Super Probotector is perhaps best known for its rock hard game play. For the most part the game takes the form of a run and gun platform game, where a single hit from an enemy will kill you. Anyone keeping up with my blog will know that while I don’t mind a challenging game, they need to be fair and progression should only hampered by the player’s skill. My big criticism of Smash TV was that its difficulty was entirely random.  Near impossible to avoid death in places simply due to the number of enemies, and the unsystematic distribution of the player upgrades needed to beat them. Super Probotector is tough, but I would maintain it’s fair. I doubt there are any ‘no death speed runs’ on YouTube for Smash TV, as the player would never know what’s coming and could not survive every screen through skill alone. There are however perfect speed 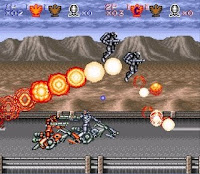 runs for this game and they are very impressive to watch. Like a bullet hell shooter it’s just a question of memorising attack patterns and lightening fast reactions. Enemies make take hundreds of hits while you can only withstand one, but reserving the right weapon for the right situation makes things fun. It’s a case of perfecting the game mechanics till even the most elaborate of enemy bullet sponge can be taken care of. Random luck is a help, but it isn’t required to complete the game, an important distinction that makes Super Probotector brutally hard, but entirely fair. 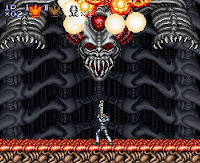 With this firm but fair level design comes the addictive quality of the game. No one has ever, completed the game on their first go – now that would be impossible. With the huge variety of the levels, the all action situations and over the top bosses, it takes repetition to learn how you are meant to beat them. The game constantly asks the player to evaluate the scene, to figure out what is expected of them and then to overcome what initially seemed like an insurmountable obstacle. However if repetition is required to reach perfection there is one thing the game needs to make it less frustrating, even if it would remove the tension –infinite continues (something the Japanese release actually had). You’d be hard pushed to think of a modern game that doesn’t have infinite lives. You get shot in the head, you go back to a continue point. You fall down a hole, back to a continue point. Impale yourself on your own sword, continue point. There is a freedom in modern gaming to take risks, knowing that the penalty for failure is not having to restart a level, all you have lost is a few minutes of progression. I have become accustom to this, I expect it. So going back to a game that has trial and error at its core (and a certain amount of finger dexterity), the penalty for failure seems excessive.  You may get 7 lives and 5 continues, but that simply isn’t enough for someone who has limited free time to play thegame long enough to memorise everything. I do enjoy the figuring out element, but I’ll often have to try many more times than I have lives before I understand the process of killing the boss correctly.

Being sent back to either the start of a level, or a midway point after each continue is thankfully something that seems to have become a thing of the past. This is why nowadays, I tend to always finish the games I play, where as when originally playing these games I wouldn’t have done. In Super Probotector I doubt I would have made ot to the fouth level even at the peak of my gaming powers.  But with this modern need for a safety net comes a modern solution – emulation with its life saving (literally) state saving mode.  Essentially this makes the EU game similar to the Japanese one in that I can give myself infinite continues, and as many continue points as I need. 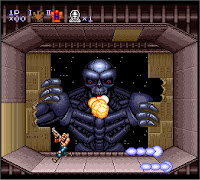 As an early demonstration of what the Super Nintendo was possible of, Super Probotector really is a tour de force. Detailed and smoothly animated player sprites, layer upon layer of parallax scrolling, imaginative use of mode 7 for backgrounds and incidental events. Everything about the game seems excessive in a wonderfully bombastic way. Though it may test the realms of realism, the set pieces too are spectacular and inventive.  Not just the aforementioned helicopter and missile leaping sequence but also the moments when huge screen filling boss sprites burst through the background to confront the player. 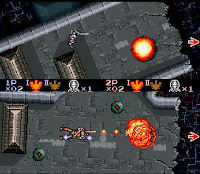 The overhead levels maybe glitchy and disorientating but they do offer a change of pace, that breaks up the platforming action. Even without them though, the level of inventiveness and original ideas on show, offer an amount of variety that isn’t apparent in other run and gun games. The problem is of course that with a difficulty curve that resembles a right angle, so few people will actually see the later stages. Rousing metal music, screaming guns and a barrage of enemies, if only the number of lives was as excessive the game would be more enjoyable.

I did enjoy my time playing this, though even with my save state abusing technique, I found it frustrating. With time to invest memorising things I’m sure it would be a great game to spend time with, but without a way of jumping to later levels I imagine replaying the first levels over and over again, would become tiresome. While I try to write this blog from a modern perspective its hard not to imagine if I would have enjoyed this when I was younger. While I had faster reaction times then and enough time to devote to this would I have?  Probably not, its a slow burn that is only rewarded after an investment in patience, practice and perfect recall. I’m very pleased to have this in my collection, if only to marvel at the art and imagination, but a certain little blue bomber is and always will be my run and gunner of choice.

Where did I get this from?
Whoever said playing video games is not a social thing is wrong, so of the people I spend the most time talking to I only know from a shared interest in video games. For example, I got this game from a friend of mine who runs an indie game shop in Norwich called Regenrating Gaming.

To say that he is a generous guy is an understatement. When I was doing my slightly bonkers charity SingStar event, he was fantastic at raising awareness and money for the cause, and for that alone I am forever in his debt. When I went back to Norwich recently his shop was more or less top of the list of places I wanted to go back to visit. I had mentioned my blog and my desire to collect Snes games to him of course. When I got there he said he had a few left from his own collection he wanted to see go to a good home, both rare, both mint and both classics. The price I paid was ludicrous, so much less than the going rate and it is another reason that I am indebted to him.

He may not offer you the same level of discount but if you’re ever in Norwich I urge you to visit Regenerating Gaming. There you will find not only a great selection of games, but also a great guy I’m glad to call a friend.