What exactly is Kirby? Looking at him gives us no clues, at best you could say he is a big pink cloud with wings and a perpetually happy expression. That is of course if you ignore the US box art when the least aggressive game character conceived is made to look bizarrely threatening! I call Kirby a "he" but I'm not even sure of that since he is also pink; traditionally the most feminine of colour. Kirby is a big pink enigma, a curiosity that transcends genre.

When you look at the games that Kirby has been in on The Super Nintendo alone you realise just how versatile he is; ‘Kirby’s Dream Land 3’ is a platformer, ‘Kirby’s Super Star’ a varied mini game collection, meanwhile ‘Kirby’s Avalanche’ is a bean based puzzle game and ‘Kirby’s Dream Course’ is a mini-golf game.   However this game didn't even start life as a Kirby game; originally it was developed as 'Special Tee Shot' and was only re-themed to include the punk fellow late into creation. Indeed, it was so close to completion that 'Kirby's Dream Course' was featured on some Super Nintendo packaging without the titular character and with a ' Special Tee Shot' logo. 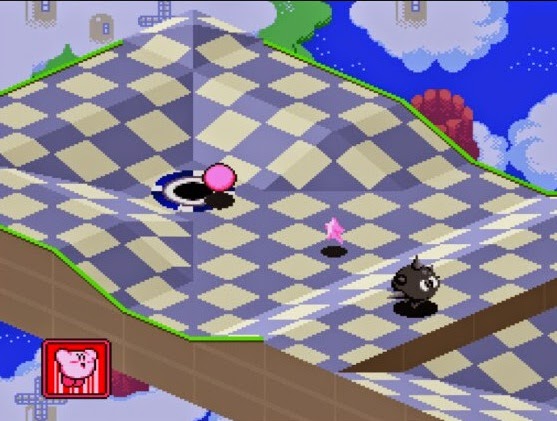 However to call the game a simple mini golf simulation is to do it a dis-service as the game play involves much more than this simple description allows.  With an instruction book of more than 50 pages and a detailed in-game tutorial there's a lot to understand before you can really progress in 'Kirby’s Dream Course'. Once upon a time I attempted to play a Japanese version and without guidance had no idea what was going on. "If this game is a mini golf game" I thought, "where's the hole, where's the ball, where's the miniature windmill?" The ball on this dream course is actually Kirby himself. The player is tasked with setting the power, angle and spin to bounce him around the course hoping to hit all the stages enemies in the process.  When only one enemy remains, that enemy will transform into the hole. 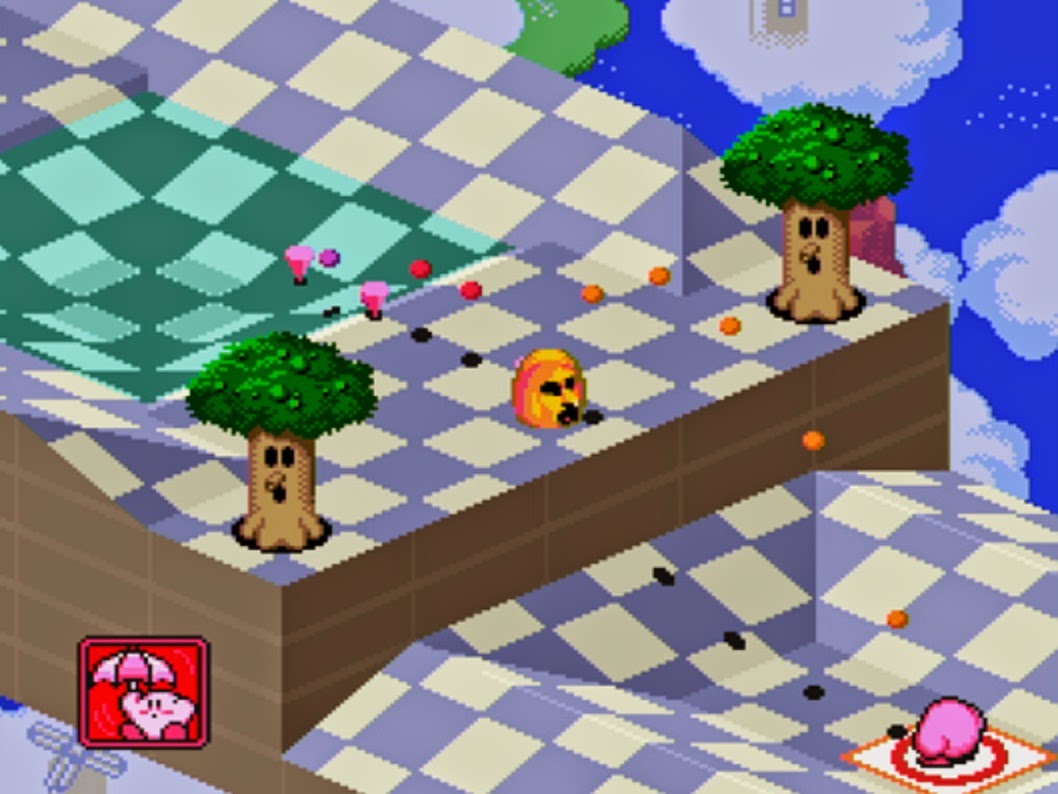 It's unlike any other golf game; one where the golfer is non-existent and the ball itself determines its own movement. To make things stranger still, this ball has powers beyond being able to be bounced off barriers, through water traps and over ravines. In the tradition of the series, this Kirby ball can also acquire different skills from the enemies he collides with. Some of the strangest powers turn Kirby into a tornado, wrecking ball and a UFO for example. All the skills are activated by the player and judicious use of these abilities is as critical to success as getting the right speed or angle on your shot.

Indeed, these abilities and their use are so integral to the game that some courses even requiring their use to create a hole. Not being a harden sports fan, I've often found that most golf games get samey after a few courses. Real golf hardly seems the most exciting sport to start off with, so I welcome any novel gimmicks or quirky additions to make the game more appealing. It certainly isn't a game for golf purists, but I doubt anyone would have expected that from a game called 'Kirby's Dream Course'.

One thing I'd bet that has never been included in a golf game before is a health gauge and it is actually possible to die on a course should too many shots be used.  In 'Dream Course' Kirby loses one point of health every time he makes a shot or gets hit by an enemy or an obstacle. 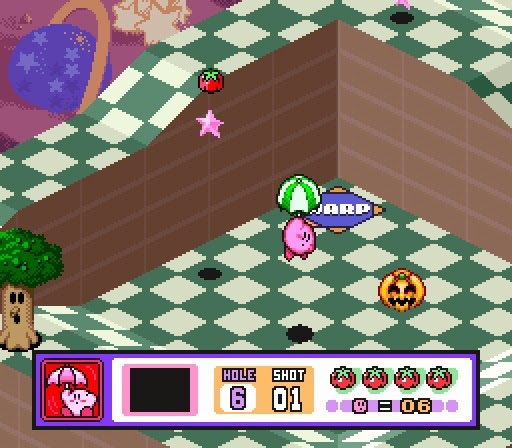 Thankfully he also gains one the first time he hits an enemy and when he eventually lands in a hole. When all his health points are gone a life is lost and when these are depleted the game will end. Initially this limited life and energy makes the game one where it's hard to progress beyond the fourth or fifth hole as beginner’s errors quickly mean that all life is used up. Even once the controls and rules of the game have become second nature having limited energy lends a sense of jeopardy to the proceeding. It forces the player to think about approaching a course in as few strokes as possible. 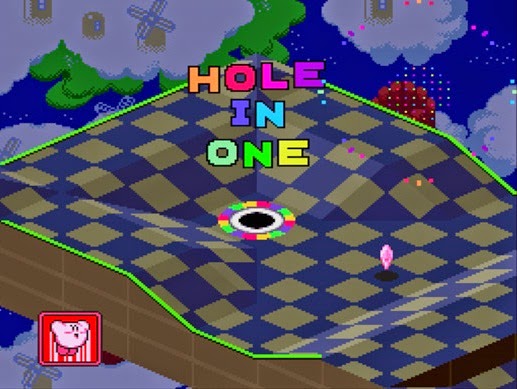 As to take damage means that the score you get for each level is significantly reduced. This score is translated into medals, bronze silver and gold; awarded in accordance with performance. While you can, to a certain extent, bounce Kirby around in a haphazard way and still complete the course with a bronze medal, getting gold or even silver demands an understanding of geometry and physics that greatly exceeds my own. Even minute deviations from an optimal route will mean strokes are lost and the gold medal becomes uncontainable. I found it frustrating but rewarding as it's only by obtaining the best medals that the course roster increases. Initially starting out as 8 worlds, an additional 8 are opened up following excellence on the fairway. Though these are repeats of the existing stages with tougher enemies (an expert mode if you will) it's good to see that devoted play and the medals it generates actually lead to something. It adds longevity to the game, but the real reason to keep coming back is undoubtedly because you’re playing the game with a friend.

I don't like turn taking as being a viable method of making a game multiplayer. For me sitting there watching while another player plays is hardly playing together. If turn taking is the only method of including a friend, the game should at least allow one player's actions to effect another player's game. Take the golfing genre for example. Two people can't obviously hit the ball at the same time that would be impractical and not really a reflection on real life. But should player 1's ball land on the green it should remain there when player 2 takes a shot. Ideally player 2 should be able to interact with player 1's ball knocking it off the green; they are after all playing the same round of golf at the same time. This is exactly the set up in 'Kirby's Dream Course' and knocking into another player’s ball really is a desirable thing to do. In multiplayer mode colliding with the other Kirby results in the two happy chaps trading abilities, stealing stars from one another and also causing damage. True to the single player mode a tomato life gauge is also present, but running out of health is less finite and results in Kirby falling asleep and losing a turn. For years I have known this as the 'ice cream cake dream' as (if his thought bubbles are to be believed) this is what a large pink anthropomorphic cloud dreams of.

With more than one player 'Kirby's Dream Course' becomes a very different game, in a way more tactical and complex, yet also far more fun and varied. In fact Super Play magazine seemed to be of the opinion that two player mode is the only way in which this game should be played. “In one player mode the game is really too hard, inferior to the addictive and highly satisfying two player mode” James Leach wrote.  “In two player mode it works a treat”.
Like multiplayer, the graphics are wonderful. Each level is constructed with tiles and basic shaded shapes that are easy on the eyes and entirely functional. Nothing in the level is there just for show. The checkerboard floor in most levels allows for easier lining up of shots. It’s a clean crisp aesthetic, filled with detailed colourful sprites and a sense of whimsy, with the added bonus of making ‘Kirby's Dream Course’ easier to play.

So with attractive graphics, original game play, jolly tunes and sounds taken from the astonishing ‘Earthbound’ did this need to be a Kirby game to be good? Considering he is not as big a draw as some of Nintendo's other franchises I don't really know what he added to 'Special Tee Shot' to make it worth the effort reworking it around him. If anything his inclusion cements Kirby's place as Nintendo's go to character when unusual games need a mascot. Kirby is Nintendo's big pink plaything when an injection of character is needed to sell a quirky experimental title. It looks simple and cute, but behind that is quite a complex game unlike any other I've played before or since. Not a golf game in any way other than the basic method to propel the ball in a hole. A much more appropriate title would be "Kirby's Geometry Logic Puzzles" though that would never appeal to children.

Where did I get this from?
Chatting to like minded people is one of the greatest things about being part of a Retro gaming community. Another perk is that when these fellow collectors want to get rid of some games, they are often up for a trade. When an online friend decided to focus on Super Famicom games her boxed NTSC games needed a home; something I gladly provided. A great trade with a great friend for a great game.
Posted by Julian Hill at 5/30/2014