There are games to suit all moods. Felling furious? Then for you I prescribe a fighter to vent your rage. A brain power surplus ailing you? Why not dabble in some puzzling fun. Feeling down and in need of a giggle? Then take two point and click games and call the doctor in the morning. Tragically the bulk of my playing nowadays is done commuting an hour to and from work; a nice distraction on a high speed train. Recently however, work hours have been long, intense and stressful. How nice it is to know that from the moment I sit on that train I have an hour to myself, unavoidable but also uninterrupted. It’s been my way of just switching off from work, and in the last few weeks a way to disengage my brain and just unwind. My choice of game for this surprised me, as on the surface it seems the least likely game you would pick to unwind.

Given my love for Pop N Twinbee, Parodius really should have been a lot higher on my playlist. In essence they are the same game, but on a different orientation. The genetic make-up so similar that you can even play as Winbee and in both colourful bells provide ship enhancement. Parodius is of course a parody of Gradius (hence the name), a horizontal scrolling shooter. As a deliberate pastiche of the genre, all the usual rules apply. Enemies float on screen attacking in predictable wave patterns that need to be memorised. There’s the typical power up gamble, with the player deciding if they should opt for the first upgrade or stack them for a greater reward. And of course at the end of each section is a screen filling boss, which 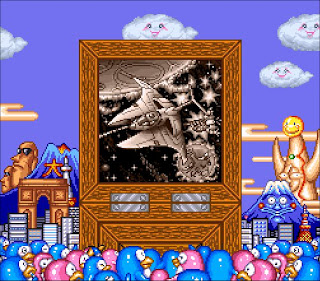 must be destroyed in order to proceed. In fact Parodius is so similar to Gradius III that initially it feels like a simple re-skin. Playing the two games side by side and for the first five minutes there’s nothing else that separates them but the visuals. The number of enemies the same, some of the sound effects are the same, even the attack patterns of the first enemies are identical. However, this visual overhaul is the reason why Parodius works so well for me. There is a delight in the familiar game style, but also equally delightful is the surprising.  There seems to be a deliberate attempt to crowd the game with the most outrageous and unusual targets possible. You may know the formula but you have literally no idea what will come next.

Take the first level for example. If you wrote a list of enemies you would expect to face in a space shooting game you would never consider multicoloured Easter Island statues, spraying syringes, stressed chickens, crabs, blue penguins in bathing caps, pink penguins firing cannons and a pirate galleon with cat’s face at the bow. All of this madness then 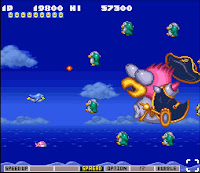 culminates in a giant end of level boss penguin that wears a pirate hat and has an infected belly button. A collection of enemies as diverse as imagination allows and that’s only the first 5 minutes. Before the game’s conclusion you will find yourself flying through the legs of a belly dancer, shooting a patriotic American turkey, taking on sumo fighting pigs and dodging the aubergine lava of an angry volcano. Everything beautifully presented in detailed well animated sprites and vibrant colours.

The bonkersness extends to other areas of the game too. Who would expect power ups 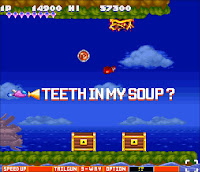 that take the form of a protective bubble and a megaphone that shouts random phases that obliterate anything immediately in front of the player? Naturally, this being a Konami published game, the music is of course fantastic – not as great as Pop N Twinbee’s but something rather special none the less. Like the rest of the game, there’s something simultaneous familiar yet off kilter about it. Re-workings of vaguely recognisable classical melodies, forced through an energetic 16 bit sieve. Catchy and memorable, yet frantic and calming. Much like the aesthetics it’s just all very odd and shouldn’t work but somehow does.

There are of course faults. You can’t always shoot behind you, even though enemies can come from that direction.  Certain routes through levels lead to unpredictable unavoidable deaths. Sometimes it’s even hard to tell what is the background and what is an enemy. Boss fights too are easy when you first meet them with your supped up armed to the teeth ship. Get hit however and as soon as you lose a life and returned to the default weapon things get a whole lot harder. These faults are true of the genre, not unique to Parodius itself and though they may not be game breaking they prove to be annoying. They take me out of my Zen like Parodius playing state, they grate, they frustrate.

But grumbles aside it is for this Zen state that I enjoy playing Parodius after a long day spent at work. Even the way I set up the game up is geared towards minimal brain input, maximum sensory return. Difficulty is set to easy and continues are infinite. The game almost feels like it plays itself, as I watch the colourful enemies cross the screen rhythmically tapping the fire button in time with the music. When talking about the game, a smarter person than me said that

“human beings tend to gravitate towards repetitive or habitual activities in order to stave off anxiety or boredom. So it's definitely possible that repetitive gaming could be symptomatic of a need to control one's environment.”

I may be irking the hardcore by reducing what is I’m sure a rock hard shooter down but for me it’s the ideal distraction in this way. Sometimes you don’t play a game for a challenge, sometime you just play one to be entertained and engulfed by it.

It may all be a non-sense fantasy, but it’s also the best form of escapism.

How did I acquire this game? 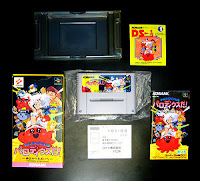 If a game is niche, it’s expensive. Typically a boxed complete copy of Parodius sells for between £30 and £45 on ebay, partly because the only way you can play it in English is by owning the PAL copy. But why would you spend so much, when the Japanese Super Famicom version is half the price? In fact for me it feels more authentic playing through the madness in its native tongue, it’s not as if anyone ever played a  parody space shooter for its emotive story.  To import games from Japan, eBay isn't always your best option. I always check on sites like Solaris Japan as often they have a game in stock cheaper than the final price it goes for on eBay. The also have a few gadget that removes any worry of getting charged extra at customs, so they're worth a look.