With frantic intricate hack-and-slash gameplay and stunning 2D Graphics, ‘ICEY’ should be a game to delight many. But with an abstract story is it all just  a bit too complicated to be enjoyable?
Developed by FantaBlade Network
Released in 2018
There’s a good chance you’ve never heard of ‘ICEY’, a game created by an unknown Chinese developer that arrived on the eShop with little fanfare. However on this occasion ignorance may actually aid your enjoyment of this obscure and intriguing title. Like so many other fourth wall breaking, meta stories, the less you know about ‘ICEY’ the more it’ll surprise and delight you.

With this in mind its worth noting that some of the games surprises will be revealed in this review, so if, like me, you'd prefer to go in completely fresh stop reading now. 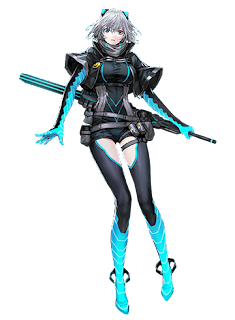 'ICEY’ presents a complicated post-modern tale that is certainly influence by the novels of George Orwell, H.P. Lovecraft, Ambrose Bierce, Philip K Dick and Yevgeny Zamyatin. With such exalted inspiration you’d be forgiven for thinking that ‘ICEY’ story would be revolutionary, but everything, initially at least, seems depressingly formulaic: The game is set in a digital city known as Ultimopolis, controlled by the consciousness of JUDAS and his many evil android zealots. “A Chosen One” is activated from cryogenic slumber to oppose him and this is ICEY, the Android you’ll manipulate throughout the adventure.
As the only audible voice in the game, a narrator demands attention and speaks to you constantly. “As long as you follow the arrow you’ll defeat JUDAS” he instructs. This seemingly omniscient presence tells you where to go but with a disingenuous delivery it’s hard to know if his objectives are in line with ICEY’s. Not following instruction irritates the Narrator and he becomes more and more exasperated when repeatedly ignored. “Do my words mean nothing to you” he asks, “or do you simply not understand what I’m saying”. The degree of compliance produces varied results; sometimes ignoring instruction leads to rooms filled with credits that can be used to buy upgrades. At other points it’s worth following the advice as doing so sheds light on ICEY’s back-story or avoids dangerous enemy filled areas.
Games like the ‘The Stanley Parable’ and ‘Portal 2’ have taught us that disembodied voices shouldn’t always be trusted and similarly in ‘ICEY’ you’re left wondering if the narrator has their own hidden agenda. As the trust breaks you’ll find yourself deliberately finding any way to not do an instructed. 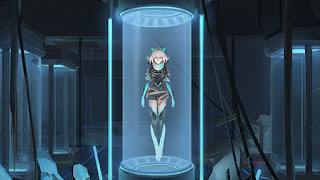 Depending on choices made a first play through will last around three hours but once finished additional objectives are shown on an in-game trophy list. This essentially requires replaying some chapters and trying to find additional ways to disobey the narrator. It’s worth spending the two hours it takes to complete these though as you’ll be rewarded with an extended ending that really is game changing.
While the relationship between the protagonist and the narrator on its own would make for an interesting game, it is merely the tip of the meta iceberg. Jarringly the narrator also behaves like a DVD style “directors commentary”; talking directly to the player discussing the process of creating a game and even at times mocking their play style. This familiarity creates a surreal sense of unease that ultimately makes the player feel like an additional participant in the game. You’re known by the Narrator but not by ICEY and this makes the player almost feel like an accomplice. You are physically leading your protagonist towards a fate (as you normally would in a game) yet feeling a sense of guilt as you do. It’s an odd sensation but one that’s unique to the video game medium where the audience is active rather than passive. 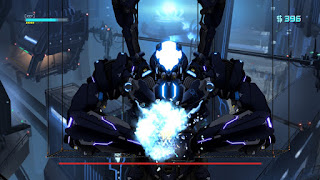 ‘ICEY’ is very aware that’s it’s a game running on a console. An obvious point of comparison would be the psycho mantis boss fight in ‘Metal Gear Solid’ which can only be completed if a player physically changes the port that their controller is in. As the battle against Psycho Mantis continues he “reads your mind” noting which games you enjoy playing. The information is gathered by the game looking at save files on the player’s memory card but even knowing this doesn’t stop it being an unsettling experience. ‘ICEY’ pulls similar tricks, addressing the player by their own name (presumably gathered by reading the profile section on the Switch), adjusting the volume (with a volume gauge appearing on screen) and even making the game appear to crash wiping your save data. Sadly some of the fourth wall breaking loses its impact when it doesn't reflect a feature of the Switch. 'ICEY's Narrator insists you "leave a 5 star review" which does rather expose the games Mobile Phone origins. Regardless, as the game progresses the distinction between your role as a Switch holding player and as the true protagonist in the game become even more blurred. At times it’s uncomfortable but that’s exactly what makes ‘ICEY’ so engaging.

I couldn’t honestly say that I understood exactly what was going on all the time and it’s difficult to know if that is deliberate or a problem with the Chinese to English translation. References to 'The King in Yellow' short stories are frequently tossed in; with the assumption the player will understand their relevance. Coupled with this is a constant stream of video game criticism, with the narrator mocking trophy addicts, hidden Easter eggs, unfinished buggy games and unnecessary side quests. ‘ICEY’ is an abstruse game that never feels restrained but this also makes it compelling.


If this all sounds confusing then it is an accurate reflection of the playing experience.
‘ICEY’ is certainly a game that requires both concentration and a willingness to just go along with it. To say more would ruin the surprises but it’s the narrative delivery that’s ‘ICEY’s real selling point. 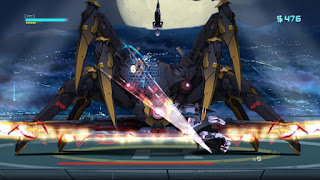 That’s not to say the game play isn’t enjoyable of course, quite the opposite in fact.
Developer FantaBlade are certainly fans of the IntiCreates games as ‘ICEY’ plays very much like the ‘Mega Man Zero’, ‘Mighty No 9’ and ‘Azure Striker Gunvolt’ Games. Our protagonist is armed with a lazer sword with which she can make quick, light normal attacks or slower heavy attacks. Once an enemy’s health is depleted ICEY can finish them off with an elaborate move. Enemy attacks depletes health and guard gauges and when the latter runs out ICEY’s combos can be interrupted reducing the power of her attacks. Thankfully you can jump and dodge to keep away from harm but a more elegant and effective defence is to use a dash to get behind enemies. This same move also allows ICEY to zip around levels, travelling vertically and horizontally with ease. Alongside the handful of repeating level enemies are larger bosses. Like other similar 2D action games, the secret to beating these bosses is to recognise their attack patterns and attack accordingly.
Defeating enemies causes them to drop crystals which can be used to briefly stun foes. As the on screen combo meter builds attacks become harder for opponents to block which is why this brief stun is so useful. It can be used to string attacks together and before long you’ll find you’re alternating between finishers and stuns building up a huge combo total. Some have described ‘ICEY’ as a 2D ‘Devil May Cry’ or ‘Bayonetta’. Like these games Button mashing won’t get you far on anything but the easiest difficulty and the game presents an imposing challenge. 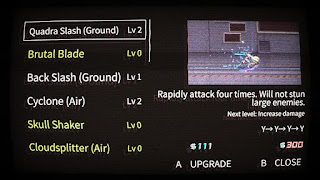 Sprinkled throughout the different areas in the game are upgrade terminals which allow you to spend the credits enemies drop or that are found in crates hidden around levels. For a cost Additional attacks can be added to ICEY’s repertoire which can in turn be upgraded three times. Her health and guard gauges can be extended and the rate at which she recovers energy or the duration of the stun can be improved. The upgrades make the game’s combat a lot easier, which particularly useful when you’re replaying sections to meet a specific objective.
‘ICEY’ is a very attractive game, with detailed pixelated character sprites and varied environments. The locations you visit also pay homage to other video games. A sign early in the game says “Welcome to Silent Hell’ and the references don’t stop there. Again, to say more would ruin surprises, but as you progress through the game it’s worth taking time to look at the incidental details in the backgrounds. 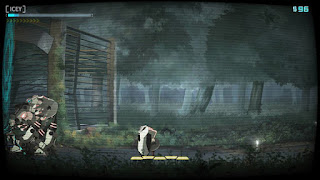 However in keeping with the narrative ‘ICEY’ embraces the fact it’s a video game. The visuals misalign, distort and glitch as you play, almost as if it’s breaking or being created around you. Menus feature dot-matrix text and they warp and distort as you access them; almost like you are forcing your head through a TV screen to see what’s behind it. Combat looks dazzling especially the finishing moves, with sparks and robotic limbs flying off the brawling combatants. The more powerful moves even cause the screen to bulge, almost as if the Switch itself can’t contain the energy. There’s a lot to keep track of though and often enemies do get lost in the visual splendour of the battles. 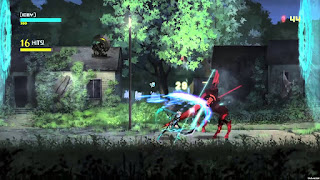 The game’s audio is on par with the visuals, with a soundtrack that’s memorable without being intrusive. A title screen recommends earphones for a better experience and with them on the atmospheric audio is as immersive as games like ‘Super Metroid’. The main theme is rousing and suitably epic certainly influenced by cinema’s recent influx of superhero movies. Meanwhile levels have a DaftPunk ‘Tron’ vibe, which perfectly matches the look of the main character. The focus of the sound is the narration of course and this defaults in English. The delivery is suitably informative and patronising only deviating from this when ICEY is particularly stubborn. Intriguingly other language options are available in the menu and the Chinese and Japanese delivery is much more dramatic and excited. As much of the narration is repeated in subsequent playthroughs I found it fun to change the nationality of the narrator each time I started again. English subtitles are always available and it’s amazing how a different vocal delivery can change the urgency and mood of the game.
‘ICEY’ has no touch or motion controls, so you can play it docked or undocked. However, it doesn’t seem to support the pro-controller which isn’t ideal as this is many people’s favoured mode of play. Combined with the insistence of wearing headphones it would seem the developers want you to play the game in handheld mode which is a shame as it looks glorious in 1080p. The explosion of light and colour are so bright they’ll illuminate a dark room and there’s no denying that you get a smug feeling of satisfaction when you see your perfected combos on a larger screen.

‘ICEY’ isn’t a game for everyone, it even acknowledges this as you play. It’s likely that the types of gamers the narrator mocks will be ‘ICEY’s harshest critics. But for a player that’s willing to be stretched it’s an incredible experience; a game that plays you and somehow always wins. I believe it’s a hidden gem on the eShop and I urge those tempted to play it immediately, ideally without reading any more about the game. While you shouldn’t know what’s in the game you should certainly be aware of its existence. Ignorance simultaneously is and isn’t bliss.
--
A download copy of this game was provided for review. The developers and publishers have not seen the final version of this review prior to publication nor did they have any influence on its content.