The Night is Dark and Full of Temptations

Its 3am and I'm sitting looking at eBay on my phone. This is a crazy situation to be in, I'm tired, shattered and the alarm is set to go off in 4 hours. I don't want to be awake at this time of course, but as I have a newly born daughter the decision has rather been taken out of my hands. Looking at eBay in the middle of the night has become something I do now, with it leading to some great results. However recently as my house has gained another voice crying out in the middle of the night it seems to be a daily occurrence - in fact I'm on eBay so much that I can literally see items appear as they are listed. Window shopping online is the same as window shopping on the high street, in that the more you do it the more you spend. You promise yourself that you're only looking to learn prices and gauge how much your collection is worth, but when that bargain appears temptation strikes. In the middle of the night strange things suddenly seem desirable but tonight's temptation has surprised even me. The seconds are ticking over on a listing I don't want. I looked when I went to bed and this game was only £2 (and £3 postage) but now it's on £6. "It's trebled in value, there is no stopping it" I think. The morning light rolls in, I wake with my phone in my hand and the listing for this game still on screen. The was a stopping point, it was £10. The game isn't really worth that, 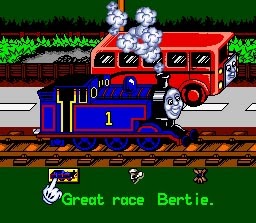 it's 'Thomas The Tank Engine', it's an awful game and the listing is for cartridge only. I'm not watching it because my three year old daughter loves the TV series. She likes playing with her train set, but I imagine she would get pretty bored answering multiple choice questions or doing 'Pipe Mania' style puzzles which is what makes up the bulk of this SNES game. I'm not watching it because it has nostalgic value, or because it has trendy or ironic box art. I'm watching it solely because I thought it would make me some money.

In my local second-hand cd and vinyl shop there's a little section devoted to games. They don't get many in there mainly PS2 or 360 titles it seems. But, they do have a couple of unboxed SNES games, of which Thomas The Tank Engine is one. It's for sale for £4 and 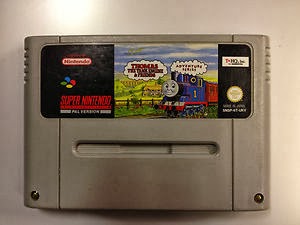 my hope was that if it was worth significantly more than that on eBay I could buy it and sell it for a tidy profit. This was my aim but in reality I wouldn't have done this. I would have been far more likely to buy a reproduction box and add it to the collection, even though there was minimal chances of me playing it, and certainly no chance of me enjoying playing it.  It's typical of how my SNES collection has been changing recently. In other posts I have talked about how I enjoy the process of findings and buying games, but recently the games I am looking for on eBay have shifted from those I desperately want to play to those that are worth money, in the hope I'll find something I know to be valuable for a low low price. This would be sensible if they were games I want, but this isn't always the case. I have found myself prioritising valuable game hunting over buying games I genuinely want to play. I've yet to find any really cheap nuggets of gold but know that if I did they would no doubt be added to the ever growing pile of shame, the tower of mint condition games I own but have yet to play.

The shift from collector at the expense of being a gamer isn't a welcome one, I want to be both simultaneously. Games regardless of their current or future value are meant to be played and enjoyed. I may, one day, be keen to buy these games and Ill kick myself for not buying cheap when I had the chance. But surely that is the lesser evil when compared to buying a game I current don't want to play just because it was cheap. There was a reason I made a 'want list' it's just not something I've been thinking about too much recently.

The solution to all this is simple, play the games I own before buying more. It's truly a revolutionary idea. Then if I must continue to use eBay (in the middle of the night when judgement is cloudy and anxiety sets in) I should at least narrow my search to the next game on my wanted list rather than simply searching for what's newly listed with the word "Snes" in the title. After all I can't kick myself for not buying something cheap if I didn't ever know it was available for a bargain price. After all my goal from the outset was to play games, not buy them!

There is a downside to all this obvious and logical thinking. What do I do to keep myself amused in the middle of the night if not endlessly searching for games I don't need or in fact actually want? If only I had a collection of un-played games to work through!
Posted by Julian Hill at 10/25/2013