Retro Gaming has become mass market, and gimmick gadget stores are eager to cash in. But how do you sell and package a collection of questionable retro inspired shovelware games ? Obviously with an over sized dance mat style controller.

Developed by Orb Gaming
Released in 2019

There was a time when there was a games arcade in every British town. Cabinet machines offered the latest eye popping graphics; visuals impossible on home consoles. Louder and louder music competed for the attention of punters and gimmicks like ride-on motorbikes and life sized guns were designed to enhance the experience. As the decades passed and home consoles became more powerful, gaming arcades slowly vanished. Arcade cabs instead only appeared in bowling alleys and motorway service stations - a lingering echo of what used to be. These last remaining arcade bastions had to offer something that couldn’t be experienced on a console at home for free. Arcade owners were forced to favour Immersive experiences with giant screens, and at the turn of the millennium the Dancing Games became a big draw.


These Rhythm-based games were first introduced as arcade games in Japan in 1998. The most popular arcade games such as ‘Dance Dance Revolution’, ‘In the Groove’, and ‘Pump It Up’ use large steel dance platforms connected to the arcade cabinet. Players would stand on a large three by three dance mat, tapping the relevant arrow on the dancing platform corresponding to the directions appearing on the screen. As the arrows appeared in time with the music, the player theoretically danced their way to victory and the when accomplished players gave it their all the spectacle was quite a sight to behold. For most though, you’d flail around in an uncoordinated way, turning into a sweaty mess as you try to keep up with the increasingly complicated dancing directions. In your head you looked like a wondrous fusion of Michael Flatly and Michael Jackson. To everyone watching though you looked like a drunken uncle dancing at a wedding, busting shapes slightly behind the beat. “It is even more interesting to observe the responses of people watching them play, since they also mimic the actions which are occurring on the screen, even though their actions have no consequences on the game play” Irene Chien, points out in ‘ the journal ‘This Is Not a Dance’. “[Dancing games are] an internationally popular means of celebrating and relaxing among the 10- to 30-year-old age group” said social historian Joanna Demers, in “Dancing machines: ‘Dance Dance Revolution’, cybernetic dance, and musical taste”.   “It fulfils participants’ desires for socialization and courtship just as discos and raves did for previous generations”.

According to Game Spot, over 6.5 million ‘Dance Dance Revolution’ arcade machines were sold globally in the three years that followed the series’ debut. Given the success, home versions were inevitable. The quality of these was sadly questionable, and the cheap accessories bundled with the home version of the games were at best, temperamental.  While popular arcade games such as ‘Dance Dance Revolution’, ‘In the Groove’, and ‘Pump It Up’ used large steel dance platforms connected to the arcade cabinet, the versions for home consoles used smaller flexible plastic pads. Using Orb Gaming’s Retro Gamer Mat feels very much like stepping back 20 years to when Dance Mats were hooked up to my PlayStation One regularly. Sadly, while there’s initial novelty playing NES era 8bit games on a giant control pad, the quality of both the controller mat and the games on offer means the fun is short lived. 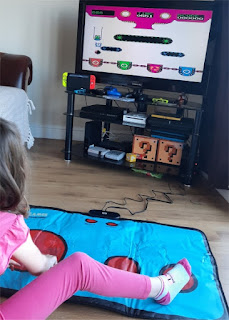 Set up is simply, RCA leads attach directly to a TV and power comes from running the included micro USB lead to any USB socket (I used the PS4 to generate the required juice). The initial front screen will certainly remind you of those awful thousand-in-one homebrew cartridges, as it give you a choice of a handful of games to play. Apparently there are 200 games to choose from, but you decision as to which to play is limited to picking an abstract title from a list. From the front menu, there’s no game description of any kind, it’s a lottery if the one you pick is any good. Largely they’re awful. Playing similar to the earliest NES games, most are simple single screen puzzle games, but there are a few sports titles, simple platformers and crude shooters in the mix. Anyone who has bought this thinking they’ll be playing ‘Super Mario Bros’ or ‘Legend of Zelda’ on an oversized controller will be sorely disappointed. My daughters and I tried close to 50 games, and the experience with each was largely the same. We spent the first 5 minutes trying to work out what to do. After 5 more minutes we then decided it wasn’t a game we wanted to play for any longer. Sometimes this was because it was actually unplayable using the giant controller, but mainly because the game we tried was so simple we had sucked all the fun from it in just 5 minutes. Dropping bombs from a warship onto submarines below, delivering Pizza on an overhead world map, sorting toys. They’ll remind you of ‘Wario Ware’ style mini games, but in that game you play for 30 seconds and then rapidly move onto the next. Visually they are all sprite based games drawn from a very limited colour pallet. I have yet to find the game that the girl in promotional material is playing, with its 16bit era visuals and ‘Wonder Boy’ style platforming game play. On screen the games on offer are a fuzzy blurry mess. There are no scan-line overlays, pixel smoothing algorithms or graphical filters. There’s not even the ability to adjust the  aspect ratio or screen size. It’s all comparable to an early clone console that hooked up to a CRT TV via an aerial lead. Anyone used to pin sharp, HD Retro emulation will wonder what’s wrong with their eyes, but at least its authentic to the time that Orb Gaming are clearly trying to emulate.

Perhaps the simple nature of the 200 games was a deliberate choice, because the controller mat itself is so imprecise. It is really just a giant NES controller, on flimsy plastic covered  fabric. It offers player a D-Pad, two action input buttons, with a start and reset buttons.  Promotional pictures suggest you use your feet to control the gameplay, but in practice we found it much easier to kneel and touch each input button with finger tips. 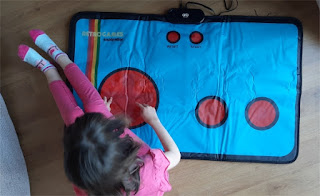 Using this method the player input was registered, 60% of the time, as long as only one button was pressed at a time. Any game that required precision was pointless. On the rare occasion that the player’s action was acknowledged, there was also an input lag that needs to be taken into consideration. It makes the whole experience somewhat frustrating. If we are judging this over-sized novelty controller against its ability to translate playing input into onscreen action it fails at its very raison d'etre. If we are judging the package based on the games it offers, they’re not really games you want to play. 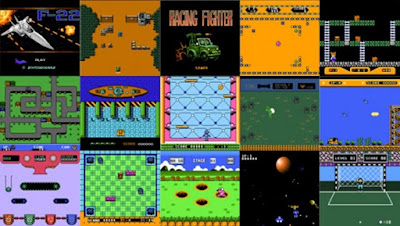 As such it’s hard to know who Orb Gaming’s Retro Gaming Controller Mat is aimed at. “Bring back all that nostalgia and all the fun with the Retro Gaming Mat” the promotion material claims. However, aging retro gaming fans will wonder why they’re wasting time playing awful hastily made 8bit style games, especially given how terrible they look and sound. For Younger gamers who don’t remember games from the 1980’s, the fun of jumping on an oversized gaming mat will be short lived. 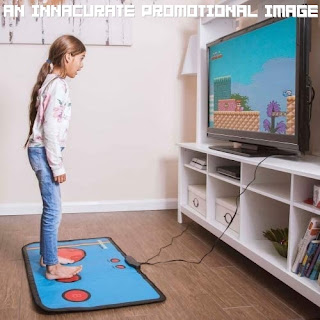 The unresponsive controller made My 9 year old daughter quickly decided her efforts were pointless. My 6 year old simply said “how long do I have to play this before we can play ‘Super Mario Party’. It feels that Orb Gaming subscribe to the belief that so many Faux-“Retro Gaming” manufacturers believe; “if we have pixel graphics and bleepy music people in their thirties will love it as it reminds them of the games they used to play”.  It’s true, but retro gaming fans who presumably are one of the target audiences for this, are probably still playing the games from their youth. I’d wager none of the 200 games on offer here would stand up against the majority of NES games, and the implied promise of playing ‘Mega Man’ with your feet simply isn’t offered. And naturally the mat itself doesn’t include a plug to hook it up to a NES, so it is impossible to see if you can finish ‘Metroid’ on a controller the size of a table.

If the controller actually worked consistently, the Retro Gaming Controller Mat could be fun thirty second experience at a retro gaming expo. It’s not something you want to pay £20 to experience.
Posted by Julian Hill at 5/01/2020

Email ThisBlogThis!Share to TwitterShare to FacebookShare to Pinterest
Labels: hardware