A Better Waste of Time?

I've mentioned several times on here that 90% of my games playing is done as I commute to work. It's an hour each way and to be honest it's not that bad, it's something I've grown to enjoy.

This seems to be an idea that baffles many, how can I possibly enjoy sitting on a train going to and from work? It's all about the preparation. I've been working in London for a few years now and I know that for each day of work I will be letting the "train take the strain" and I know I’ll be fixed to that seat for at least 10 hours a week. If I want to take a wage it’s unavoidable, so how do I fill that time to turn a chore into something almost enjoyable? I prepare. I have a laptop and each time I buy a new boxed game I put the rom on it. I then play this with a Snes style USB controller and to be honest how quickly the journey feels reflects how much I enjoy the game. There have even been times I’ve reached my destination and even been reluctant to get off the train as I were close to finishing a stage or even a game.  To be honest this blog only exists because of my commuter computer, and the time offered to me to play games in this focused regular way. 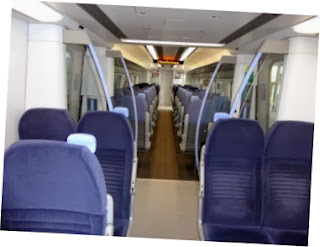 When I told a friend in Australia about my technological train activities she was surprised, as I think she imagined all trains to London as being like The Underground. Mine though is a fancy fast train, closer to a plane really, with chairs with head rests, phone charging points and tables. But these tables that I value so much for offering me a place to put my laptop, also cause no end of grief. As opposite each table is a seat that looks towards me, and in that seat 9 times out of 10 will sit someone who stares at me as if I were doing something despicable. I follow their gaze each time: they notice the laptop, then the control and then the thirty year old that has combined the two. Seemingly this is odd behaviour, not something that presumably is done a great deal on the high speed train line. They stare, and go back to either reading a paper or playing with their phones. This is fine of course, I don't need their approval and no doubt it does look strange. It's just that if they are tapping on a phone the chances are they are playing a game too, only evidently in a more conventional socially approved manner.

It's not something that’s limited to my mainline train journey. After my high speed jaunt I usually jump on 'The Tube' for a few stops. As I gaze along the carriage everyone is looking at a mobile or tablet of some sort, perhaps to avoid eye contact with other commuters (a social faux pas that is even greater than playing an emulator with a USB pad). On these screens usually without fail I see Temple Run, I see Candy Crush and I see Angry Birds. It frustrates me. As good as these titles are, there's so many better games theses people could be playing if they broadened their horizons.  The laptop and emulator combo is an extreme example, but with so many great games on handhelds just think how much more enjoyment they could be having. If they're anything like me they spend hours in metal tubes being transported hundreds of miles so why not embrace it, admit they're a gamer and waste their time in a greater variety of ways.

Of course if my fellow train buddies are enjoying themselves there is no problem with how they spend their time. It's just a reminder that even after nearly 30 years of increasing mainstream penetration there's still a stigma attached to Video games. Playing a game on a phone is discreet, and if your conscious someone's looking you can quickly switch to the Internet or social media and pretend you’re catching up with news or being popular. Using a games console of any variety in public is similar to standing up, raising your hand and declaring you're a geek, like an addict at a Retro Gaming Anonymous meeting. An adult playing a video game is the norm, provided it isn't on a games console; and few want to admit to what they’re doing. Or at best, a video game is something you play when all other ways of finding amusement are taken away from you; an entertainment pursuit that you consume through necessity rather than choice or desire.

I’m on my way home now after a long day at work. As we pull into the station after an hour of travel I have saved a princess after a particularly emotional narrative development, my train companion has lined up some candy for the last 60 minutes. Tomorrow I will perhaps venture into space or have a fist fight with a rival, they will line up candy. The next day I could fight a dragon or free a nation, they will line up candy. It's not that I don't see the appeal of candy lining up; I love puzzling arcadey games. It's just that there is a larger gaming buffet out there to be enjoyed, there’s better ways to waste the time.
Posted by Julian Hill at 2/07/2014