What's in the box?

Have a search on eBay for SNES games. As your eyes scan down the listings you will probably notice a couple of things. First thing will no doubt be the hilarious prices that people think Fifa 96 is worth, but maybe after giggling at that you may notice that the majority of listings are only for the game cartridge. It certainly seems odd that every one of those games once had a box, instruction manual even a little baggy that protected the game. However over time these have been lost or even deliberately thrown away. I have to wonder if  other people place the same value on boxes as I do; after all they are cumbersome, they more than double the physical space taken up by the cartridge and are not needed to play the game in anyway.

Originally of course boxes were designed to attract a customer’s eyes; to encourage them to pick up a game they otherwise would have had no intention of buying. With their exciting art work and enticing game descriptions, every inch of a game’s box is geared towards the sale (I talked more about the draw of this for my younger self in my Vortex review). So logically, once you’ve bought it aside from offering a bit of protection to the cartridge these boxes do nothing.

So why do I place a value on them? To me the box and the game are one and the same. A degree of care was taken by someone to create box art that encapsulates the experience of playing. Sometimes striped back and emotive other times bright colourful and fun. Often the box itself exceeds the game of course, promising much and delivering little. Occasionally the box is a dismal representation of an excellent experience or indeed a misunderstanding of what is important to the player

(Street Fighter 2 Turbo I’m looking at you – no one wants to play as Honda in pink.)  But regardless of the specific image, it was a conscious choice to package the game in this way. As such it seems remiss to dismiss it so casually, to me it’s more than a disposable wrapper.

However, as with all things collectible  if you want a box you pay for a box, often an excessive amount. Sticking the phrase ‘Complete in Box’ in a listing often gathers you twice the value should it prove to be true, with a sliding scale for how well cared for these boxes are. To a true collector CIB games seem to be the only way forward, and it is often said that the value of complete games will be constant (or increase) going forward as less and less of them exist.

As is evident in the title for this blog, I like my pixels boxed, I like my games complete. But this is at odds with my very conscious self imposed limits on what I pay. If I’m eBay shopping on a limited budget I’m simply not going to get the rarer or more sought after games that I desire so much.

But, I found a solution I thought: Reproduction.  For the price of £7 (including P&P) you can buy a replica box for pretty much any game you desire. They’re all there, even for the rarest titles and of course it means they are as mint as the day they were printed (usually the day before you receive them and the day after you bought them). You have to accept that they are not perfect, the print is sometimes less precise, and metallic paint on the seal of quality is not shiny, and the cardboard is white rather than grey. But does any of that matter if the goal is simply to own a box and reunite it with a loose cart?
This is something that I wanted to explore, especially as I wanted a number of rare games that if complete command prices of £40, £50, £60 or sometime even over £100.  One such game that I very much wanted was Rainbow Bell Adventures, the platforming sequel to Pop N’ Twinbee. Given the obscure nature of the original, and the limited appeal of a generically different sequel it was inevitable that the follow up would have niche appeal and a limited print run. I never played it as a youngster, but given my love for Pop N’ Twinbee I always wanted to.  So when I embarked on this ‘buying lots of Super Nintendo games’ adventure I looked at the price on eBay. ‘Buy It Now’s’ for at least £40 for the

tattiest of boxes and auctions often having bids exceeding that. This was not something I was willing to pay for a curio. I saw however an auction for the cartridge on it’s own, and using a cheeky combination of sniping and bidding unusual amounts, I won it for £10.08. With the game bought I then looked for a reproduction box, evidently something I should have done first. Again given the niche nature of the game, I couldn’t find anyone on eBay who sold them. A Google search initially offered hope when I found a site called NintAndBox who offer PDFs of game boxes for you to print and build yourself, but even they didn’t have this illusive game. 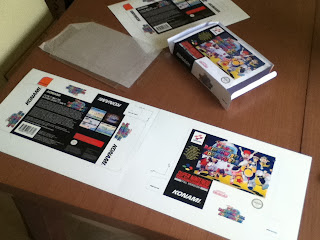 I had no choice, should I want this box I would have to make it myself, but luckily I’m pretty handy on PhotoShop. When armed with some high-rez art work, some reference pictures, a SNES box template and a heap of time I managed to make something not a million miles away from the unobtainable box. Printing it was however a nightmare, the ink smudged on the glossy paper I’d used, the glue wasn’t strong enough to hold the sides in place and the less said about constructing it the better. But at the end of it all, when placed in a protector I had a pretty convincing package. I even went as far to buy a boxed mint copy of Fifa for £3 (including P&P) just to get the white game tray, to put the cartridge in. Once the game came, I brought it all together and placed it among my other games. I was happy, I had a boxed copy, I had a cheap reproduction of what I wanted, I had a homemade lie.

Irony though has a habit of playing with your happiness.  A few weeks after I made my Pop N Twinbee box I went back to my former hometown of Norwich and to an indie game shop I loved. What should I see on the shelf? Only the rarity that is Rainbow Bell Adventures. With my mates’ rate discount, I didn’t think twice about buying it –even though I had at home something very similar that was wrapped in the embodiment of my all creativity and devotion to collecting boxed games.   Placing the two side by side fills me with equal amounts of pride and shame. My version has little imperfections such as the wrong font for some text, incorrect screen shots and slightly blurry health warnings. 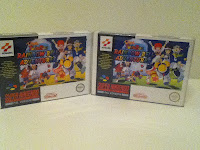 However, even though I say it myself, it isn’t far off. Quite a feat considering I had never actually seen a real copy before, and had made it from best guesses based on images and information found online. The colours are actually more vibrant in my reproduction, with no creases, edge wear or the dents of twenty years. Indeed, even though I now own the original I kept this fabricated reproduction – it hold its own memories, more recent but no less real. Much like the original boxes, surely my clone is worth more than being thrown away.

I now stand by the opinion, that reproduction boxes are a stop gap, not a solution.  Something that’ll tide me over till the genuine article comes along. I certainly won’t make one again though.  It really isn’t much fun squinting at low resolution images to read what the box’s text should say or getting my fingers covered in black ink, sticky tape and glue. So if I have to pay for a reproduction box, (at only £4 a time from this great guy) when added to the price of a loose cart and a replacement game tray would I bother? For the majority of games, probably not. When the real deal is listed frequently and relatively cheaply  it’s just too expensive for something that lacks authenticity. For something like Earthbound or Mega Man X3 though I can’t deny that I would be tempted. When the difference between a loose cartridge and a CIB game is a hundred pounds, the price of the real thing moves from being justifiable to being excessive and not something I’d entertain.

I guess it’s true of any piece of art you’ve always wanted. You would love to have the original master piece but if you can’t afford it, it’s better to have a copy than nothing at all.

The only problem is a lack of instruction book – I wonder if I could make those, it certainly would involve less cutting and sticking.

If you are interested in making your own Pop N' Twinbee - Rainbow Bell Adventures box I have included the box I made below.

Feel free to cut it out and stick it together - but if you do let me know how you get on!